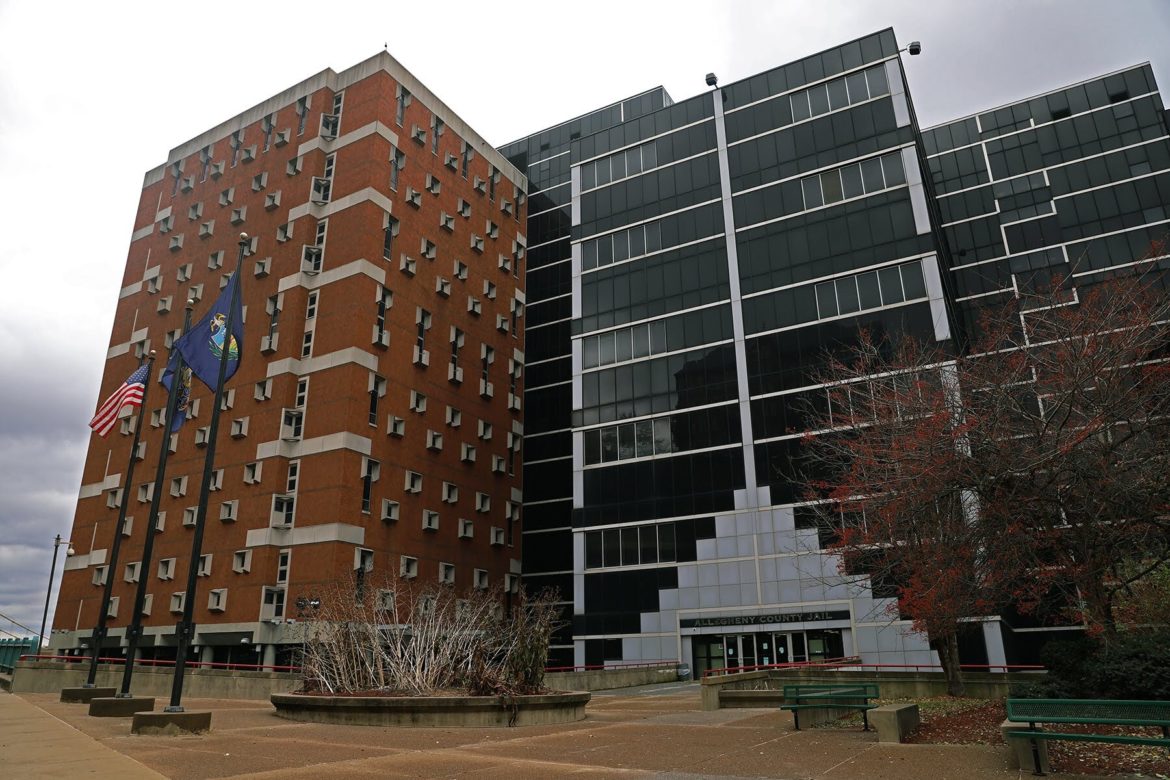 Christopher West sleeps in two thermal shirts and two pairs of socks. He moved his cot to the center of his cell, on the floor and away from the walls where it’s coldest. Still, West said it’s hard to stay warm in the Allegheny County Jail. On Feb. 8, West asked a friend to post a message on his Instagram: “Somebody tell THEM to turn on the heat in the ACJ we freezing,” the post read. 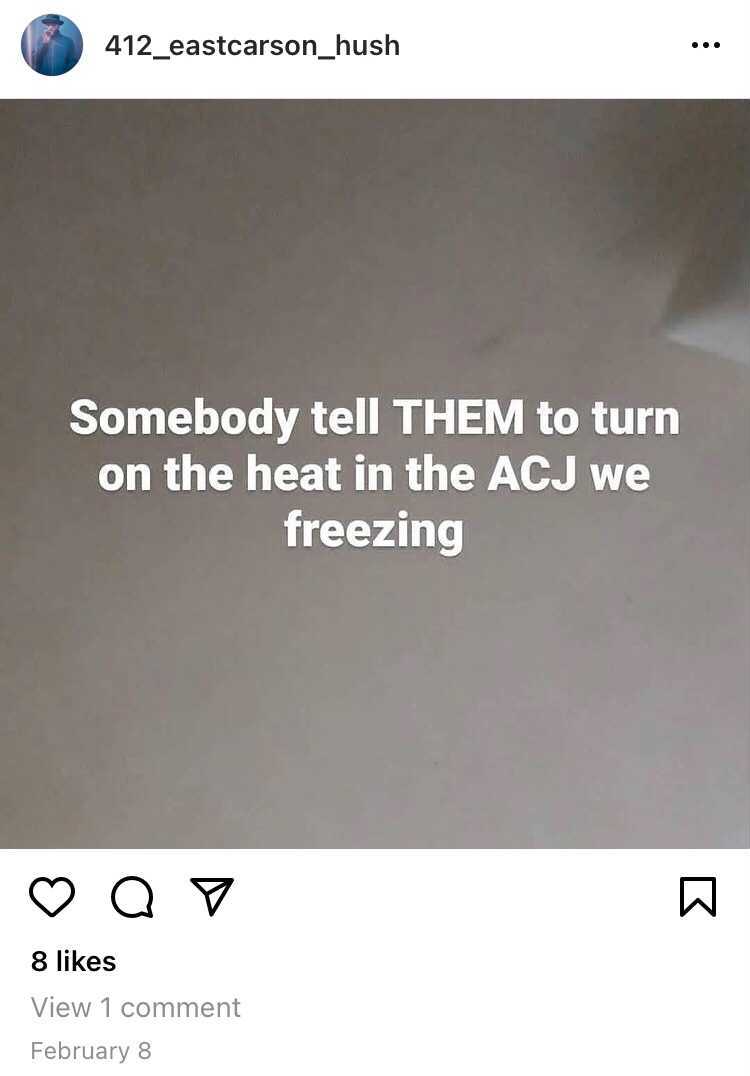 Parts of the Allegheny County Jail are plagued with frigid temperatures, according to jail complaints, incarcerated people and their loved ones — a problem that has been raised to jail leadership and the jail board. The county says there is no issue with the heat and that maintenance issues are quickly addressed. Either way, a new heating system is on track to be finished by the end of the year.

PublicSource heard from over a dozen incarcerated people, family members and advocates who complained of inadequate heat at the Uptown facility, which held a daily average of 1,701 individuals in February. Several alleged that while the common areas of the jail are warm, some cells are so cold that individuals can see their breath or have ice on the floor. After receiving repeated complaints about the heat, one grassroots group organized a phone zap to call jail management en masse earlier this month.

“I don’t understand why they don’t have no heat at all blowing into the cells,” said Mike Kiselka on Feb. 22, who is incarcerated at the jail. “They have cool air coming out the vent.”

County spokesperson Amie Downs wrote in a January email to PublicSource that there “has not been any issue with the jail’s heat at all this month.”

“As with all of our homes, there are often smaller VAV boxes that need to be fixed. Those control the heat in a few cells. There is 24/7 maintenance at the facility and as soon as notification is made that there is an issue, it is repaired,” Downs wrote.

Al Caponi, the county’s director of facilities management, said each time the department has received a complaint about temperatures in the jail, it has taken readings on all levels. “Pod temperatures each time have registered at approximately 74 degrees,” he wrote in a Feb. 25 email to PublicSource. Downs confirmed that the readings were taken inside the cells, not just in the recreational areas.

The jail is heated by Pittsburgh Allegheny County Thermal, Ltd., known as PACT, which provides heat to the Downtown business district and the jail via steam that travels from a boiler plant on Fort Duquesne Boulevard through underground pipes.

Timothy O'Brien, PACT’s operations manager, said PACT is not experiencing any system issues and has not received any complaints from the county about steam services to the jail.

“We provide the Jail a double feed system capable of delivering 2-3 times the actual building requirement,” O’Brien wrote in a Feb. 19 email to PublicSource. He added that once the steam is delivered to the jail’s utility facility, it is then the county’s responsibility to transfer the steam through the complex. “I am sadden[ed] to hear that the inmates are having to deal with these conditions but to me it sounds like a downstream issue after the service is delivered,” O’Brien wrote.

A new heating system for the facility is on the horizon. The jail will soon be heated by steam heat through an energy plant located on its property, installed by Peoples Natural Gas and owned by the county, per a contract signed in late 2019. A separate energy plant in the County Office Building will supply the jail’s hot water. The jail’s energy plant is expected to be completed by the end of the year, Caponi wrote.

Excerpt from the 2019 agreement for a new heat system between Allegheny County and Peoples Natural Gas.

Warden Orlando Harper has also said there is no issue with the heat at the jail. “As far as the temperatures in the cell blocks, I walk the cell block frequently, and it is very comfortable in the cell block. And if the inmates are complaining, we know the corner cells are colder, we’ll move the inmate from the corner cell,” Harper said at the Jail Oversight Board meeting in January in response to a public comment alleging the facility had no heat or hot water. He said the jail did have a hot water issue but it was fixed immediately, and added that each inmate is given two heavy blankets to keep warm.

On Jan. 13, Richard Arrington, who was incarcerated at the jail, said he was wearing two T-shirts, a thermal shirt and his uniform. “No heat in cells no heat on to be warm and could catch the flu from this treatment,” Arrington wrote in a complaint marked Jan. 2. It was marked “valid” by a correctional officer on Jan. 12. “A maintenance form has been filed for this issue,” the officer wrote.

Jailbreak PGH, a grassroots group that advocates for people inside the jail, heard in early February from over 10 people at the facility that the vents inside the cells were blowing cold air, according to Nicole, a member who asked that her last name be withheld for privacy concerns. “To be hearing that overwhelmingly, I would imagine it’s affecting everyone in there,” she said.

The group organized a phone zap to the jail the week of Feb. 8 to demand the issue be addressed. “The phone zap had to happen because there was no awareness of what was going on, and if we don’t advocate for them in these situations, there’s no one who will.” Nicole said jail administrators did not respond to the group’s calls, but that individuals inside the jail have told Jailbreak PGH that the vents were no longer blowing cold air, though they said the heat was still not functioning.

Every holiday season, the jail’s Inmate Welfare Fund buys every incarcerated person a thermal shirt to help keep warm. The purchase cost the fund $6,600 last year, according to the county controller’s office.

“People are always cold in the jail. They have to know that it’s cold and not a comfortable temperature because that’s why they use the Inmate Welfare Fund to buy thermals and long underwear,” Bethany Hallam, a member of the Jail Oversight Board, told PublicSource in January.

Some formerly incarcerated people said the jail’s heat has been an issue for years. Levi Molyneaux, who was incarcerated at the jail five times between 2013 and 2020, equated the facility to a “refrigerator.”

“It’s sad. You see your breath inside. It’s terrible,” he said.

Barbara Hulcha, who was at the jail from November 2014 to June 2016, agreed. “I was in there freezing. I had to sleep every day with a blanket over my head.” She described people cutting the bottom of their socks to use them as sleeves. Complaints, she said, went unaddressed. “They basically tell you, this is jail. What did you expect to happen?”