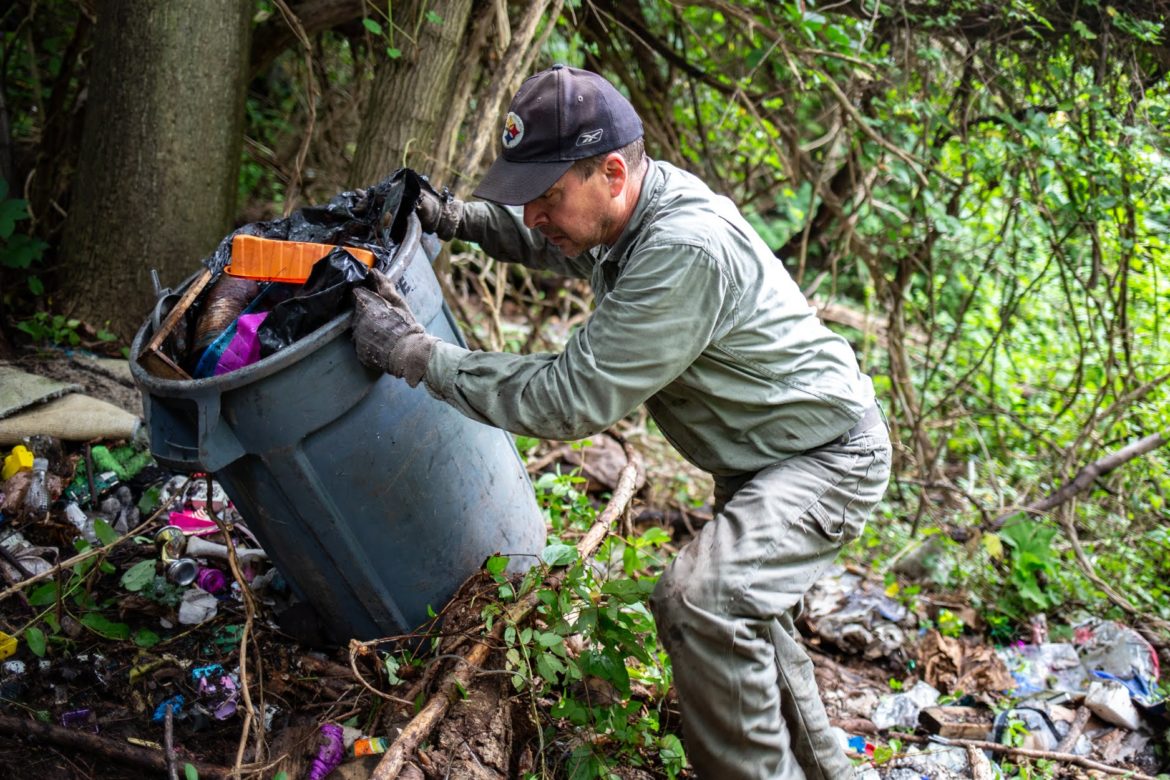 Whenever the pair finds a hypodermic needle, they usually don’t just find one; they find several.

Chernov, 52, and Kramer, 31, are the only two employees who pick up trash, part time, for Allegheny CleanWays, a nonprofit that specializes in cleaning up the millions of pounds of junk that have been illegally discarded across Allegheny County. The nonprofit focuses on sites with at least 50 pounds of trash, not small pieces of litter. They pick up garbage on private land and dangerous hillsides where city workers aren’t allowed to go.

The Homewood site is typical: it’s hidden behind dense shrubbery, down a small drop-off. It’s easy for an unscrupulous hauler to slide waste over the edge of their trucks there without being seen. While the needles aren’t unusual, Chernov said he’ll find a gun on occasion: he’s found nine in piles like this.

Listen to this story on The Allegheny Front:

Over the past decade, Allegheny CleanWays has picked up 5 million pounds of garbage at illegal dumping sites, largely in the city of Pittsburgh. The group recently studied the problem outside of the city limits and found that the problem was more significant than anyone knew.

They discovered nearly 500 sites containing about 3 million pounds of waste — four times as much trash as Pennsylvania CleanWays found in a similar study from 2005.

The new study also estimated that all of these dumpsites could be cleaned up for fewer than $1 million. With more resources, the study contends, the county could be wiped clean of illegal dumpsites. This would stand to improve the property value of nearby homes, decrease the risks of injury and disease and even, some studies suggest, make neighbors happier.

With more local government support and funding, Allegheny CleanWays Executive Director Myrna Newman said most of the county's illegal dumpsites could become a problem of the past.

"We are literally still dealing with dumpsites that are 50-plus years old,” she said. "So if we can get a lot of those cleaned up, I do think a big portion of the problem would be solved. Some of them just have never been addressed."

A dumpsite usually falls into one of two categories, Chernov said: Did someone die? Or were they evicted?

The Homewood site appears to Chernov to have been an eviction.

“Nobody is going to throw away all their kitchen plates and silverware and crocks and pots and pans all at the same time along with their kids’ toys,” he said, speculating.

These kinds of dumpsites are not only unsightly but can also be dangerous. Needles and broken glass can cut feet and kill animals. Kramer found the skeleton of a small animal in the pile.

They also found about a dozen used tires, which fill up with water and become breeding grounds for mosquitoes that can spread disease. 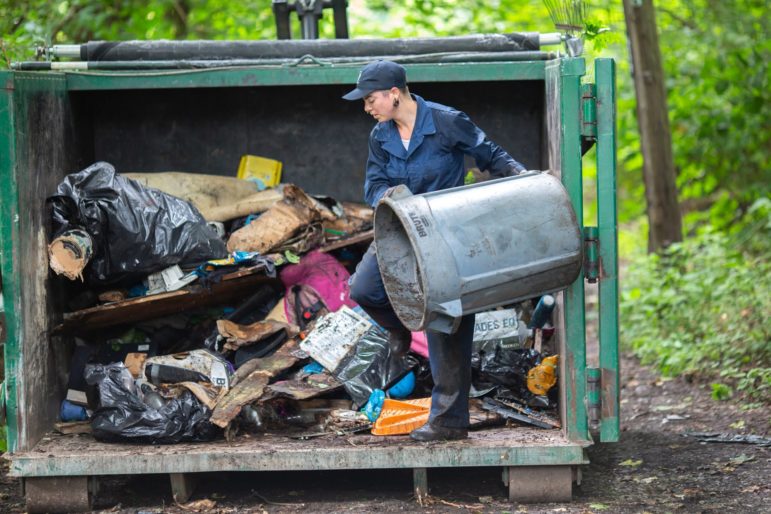 Crew member Dani Kramer empties a garbage can of discarded items she collected at an illegal hillside dump site along North Wheeler Street in Homewood. (Photo by John Altdorfer/PublicSource)

New research suggests that the trash could also be depressing to neighbors. Researchers at the University of Pennsylvania published a study in July that examined blighted neighborhoods in Philadelphia. In some neighborhoods, they cleaned up the trash and replaced the blight with greenery.

The researchers found that residents in the tidied neighborhoods reported 41.5 percent less depression over the course of three years.

All of these problems hit home for Leo Butler, who lives with his partner and two young daughters in the closest house to the Homewood dump. Leimya, 7, said she knows not to play hide-and-seek by the dump.

Butler spends a lot of time taking care of his property, recently taking several days to cut down the shrubbery on one side, so he said it’s frustrating to watch the end of his street turn into a dumping ground.

He tries to block access to the site by parking his car in front of the dead end. But he works at McDonald’s during the day and can’t stop dumpers when he’s gone.

"Somebody is always coming up here dumping something, throwing something over there,” Butler said. “It’s constantly every day.”

About 50 feet in the opposite direction of Butler’s house, Chernov found two plastic jugs filled with urine, which he thinks were left by a homeless man. In picking up the bottles, Chernov had crossed into Penn Hills. According to the Allegheny CleanWays study, Penn Hills has the second-worst dumping problem in the county, behind McKeesport, with 44 dumpsites.

To arrive at a count for the study, Chernov and Kramer spent the winter driving every road in the county to find illegal dumping sites. They kept their eyes peeled for abandoned houses, woods and steep hillsides, where they often find trash.

"We are literally still dealing with dumpsites that are 50-plus years old."

Kramer and Chernov found an abandoned house in Braddock so full of tires, they couldn’t open the front door. On another hillside in McKeesport they stumbled into thousands of tires that had been dumped over the years.

"We wouldn't even count this [spot in Homewood] as a dumpsite in certain neighborhoods because they were just so bad,” Chernov said.

In 2005, the workers who did the survey were told they didn’t have to go into any neighborhoods where they felt unsafe. Chernov and Kramer found that many of those skipped neighborhoods were the ones with the most trash.

And some laws may have made the dumping problem worse. A 2010 Pennsylvania law prohibited TVs and other electronics from being dumped in landfills. Although the law was well intentioned, environmental advocates say, there wasn’t a good plan for what to do with all the old TVs. In 2005, the surveyors found a few dozen TVs scattered throughout the county; in 2018, they found nearly 1,000. 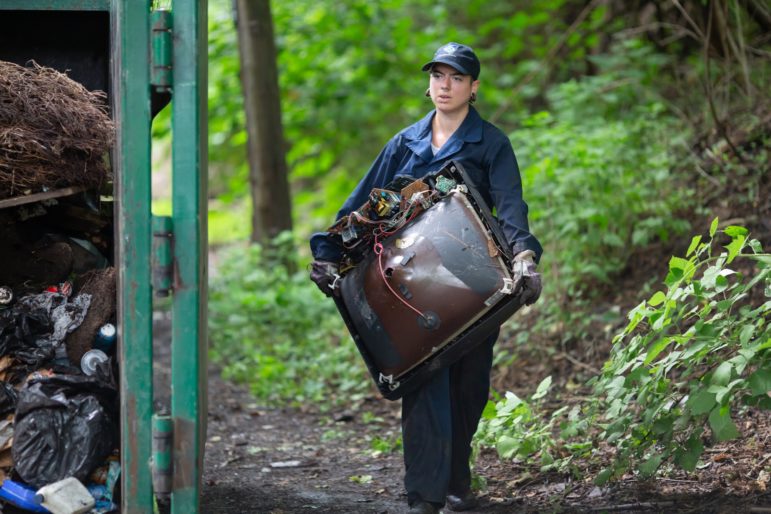 Allegheny CleanWays keeps track of the county's illegal dumpsites on an interactive map on their website. After they finish cleaning up a site, they change the color of the pin on the map from red to green. After more than a decade of work, Pittsburgh now has many more green pins than red ones.

Outside the city, the pins are largely still red.

Stop the dumping before it starts

Chris Blackwell, the planning director for Penn Hills, has been trying to stop illegal dumping for 25 years, he said. He’s followed trucks full of dirt to see where they are going. He recently dug through the trash from one dumpsite to find a landscaper’s mail and tried to prosecute him. He couldn’t prove the landscaper did the dumping.

The problem confounds him. People are taking mattresses and furniture that could be picked up for free by Penn Hills garbage trucks in front of their houses and dumping them right next to signs that say, “No dumping.”

"We are working hard at it, we are very diligent and we will catch somebody. And we're going to nail them for these things."

Penn Hills’ biggest problem area is Lincoln Park, next to Homewood, Blackwell said. In addition to the many vacant and demolished houses, there are fewer police patrols at the edge of town, he said, so it can feel like a “no man’s land.”

Two months ago, Blackwell led the installment of grant-funded video cameras to combat the problem. He was asked by the funder, Keep Pennsylvania Beautiful, not to say much about his new operation so as not to tip off the dumpers. He wouldn’t even disclose the camera locations to a council member at a public meeting.

So far, the cameras haven’t yet been able to capture both a face and a license plate of an illegal dumper. “We are working hard at it, we are very diligent and we will catch somebody,” Blackwell said. "And we're going to nail them for these things."

State law sets the fine for illegal dumping at $300, but, according to a Keep Pennsylvania Beautiful study, it costs more than $600 on average to clean up a site.

Minor fines may not be sufficient to stop the spread of discarded tires, one of the county’s biggest dumping problems. It costs hauling companies $3 to recycle each used tire. So the unscrupulous ones will dump them illegally and pocket the $3. There are more than 27,000 used tires scattered around the county, including about 1,000 at one spot in Penn Hills, Blackwell said.

Blackwell successfully caught and prosecuted a licensed hauling company that had been dumping the tires. But the 1,000 tires are still there, he said, because it’s a small company that doesn’t have the up to $100,000 it could take to clean up the site.

Now he is trying to push a new town ordinance, which would require municipal stores that sell tires to keep track of all their used tires and keep track of where they were taken to be disposed. Allegheny CleanWays wants the whole state to track tires. 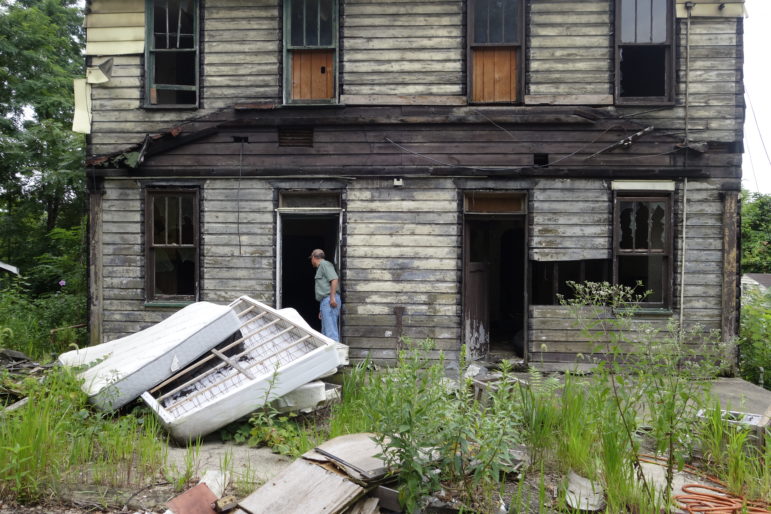 Al Chernov, the DumpBusters crew leader for Allegheny CleanWays, peers inside an abandoned house in McKeesport, near some of the county's biggest dumping sites. (Photo by Oliver Morrison/PublicSource)

The cleanup efforts will make Penn Hills better, Blackwell said, but at the end of the day, he believes illegal dumping is no different than any other crime.

In an ideal world, Newman said, there would be a single sorting facility open seven days a week for people to take all of their junk, no matter what it is. That way if someone dies or is evicted, confused family members and lazy landlords would be less likely to break the law.

"Can we fix the problem for $1 million?” she said. "Probably not. But I think it would make a huge dent in it. I think that cleaning up the debris is more than half of the battle because most people are reluctant to be the first person to litter or dump somewhere."

A version of this story aired on The Allegheny Front, a public program covering the environment in western Pennsylvania on August 20, 2018.

2 thoughts on “Allegheny County has a massive illegal dump problem. Could $1 million solve this problem for good?”