Meta Hairston, retired special education teacher, is skeptical that new plans for the old Civic Arena will fulfill promises made to the black community. (Photo by Tom Lisi/PublicSource)

After years of delays and previous plans that fizzled, Hill District residents can expect a new round of community meetings regarding plans announced Friday for the former Civic Arena site.

The site has been a sore spot since the 1950s when Lower Hill District residents were displaced to build the arena, which was demolished in 2012. Now residents are wondering how the Pittsburgh Penguins’ latest proposal for retail, offices, housing and park space will ultimately impact the community.

“When they first tore down the [Civic] Arena, they made the black community all these grandiose promises, which to this day have never been filled,” said Meta Hairston, a retired special education teacher and Hill resident. “It never sounded like they were going to do anything for the low-income people that have been displaced” for decades.

The land currently serves as parking for Downtown workers and visitors to the PPG Paints Arena, which opened as a replacement for the Civic Arena in 2010. The Penguins communications office did not respond to an interview request Wednesday.

Councilman R. Daniel Lavelle said he hopes residents will be able to provide input as developers submit more detailed plans. He expected the public process would begin in the next couple months.

Lavelle, who represents the Hill District, has been a central player in the years-long negotiations involving Penguins management, city officials and neighborhood residents. Lavelle is a board member of the Urban Redevelopment Authority [URA], one of the public landowners of the Civic Arena site. He is also one of three co-chairs of an executive committee created as part of a 2014 agreement between the city, the Penguins organization and Hill District leaders that established local community-oriented goals for the 28-acre Civic Arena site.

U.S. Steel previously planned to build a new headquarters on the site but backed out in November 2015. A plan to build affordable housing also fell through last year after the developer failed to secure federal low-income housing credits from state officials.

The Penguins announced Friday that the Delaware-based Buccini/Pollin Group [BPG] will serve as master developer for the commercial development at the site. The Penguins’ announcement predicted the overall development will generate 3,000 permanent jobs and $750 million in private investment.

The site plans include a 200,000-square-foot office and retail complex, with construction set to start next winter. Work is slated to begin this summer on a $26.4 million pedestrian park, funded largely by a grant from the U.S. Department of Transportation, to connect the site to Downtown. The site will also include a new 4-acre public park.

“I had a couple of good conversations with [BPG] so I think they're capable to certainly do the development, but I also think they're buying into the sort of larger social and economic goals of the project,” Lavelle said. 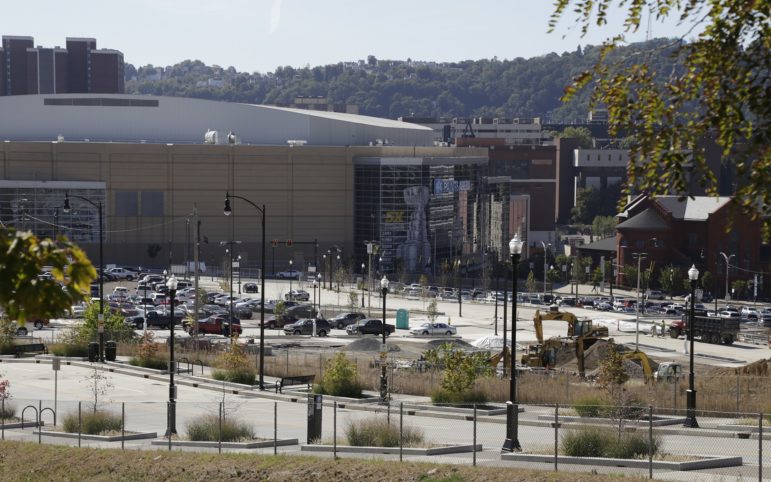 Vehicles are parked in the area near where Pittsburgh's Civic Arena once stood in the Hill District. (Photo by Ryan Loew/PublicSource)

A 250-unit housing complex with developer Keith Key of KBK Enterprises, a partner of the Intergen group, will include 50 units below market rate, reserved for households that make 80 percent of the area’s median income as calculated by the U.S. Department of Housing and Urban Development.

For a family of four in Allegheny County, household incomes must be no more than $60,800 to qualify for a unit at 80 percent AMI.

Intergen will build an additional 250 units in a second phase of construction, according to the Penguins.

Throughout negotiations, Hill District leaders have emphasized the inclusion of affordable housing as a way to make the new development accessible to nearby residents.

The 2014 agreement between the city, Penguins and Hill District leaders established the Community Collaboration Executive Committee, which Lavelle co-chairs along with a representative from the mayor’s office, Deputy Chief of Staff Majestic Lane, and Kevin Acklin, an executive in the Penguins organization and former chief of staff to Mayor Bill Peduto. The committee is responsible for making sure the Penguins and its development team make an effort to fulfill a set of minority-participation goals.

The metrics outlined in the 2014 agreement include:

As part of the Penguins’ agreement with the city and Hill District leaders, a local property tax abatement tied to the development site will draw $25 million to a URA fund devoted to community investment in the Hill. The money would be generated within the next 10 years, Lavelle said.

In a Friday press release, Peduto said the city, Penguins and the development team are “delivering on promises of new jobs, affordable housing, and a historic re-connection between the Hill and the heart of the Downtown business district." 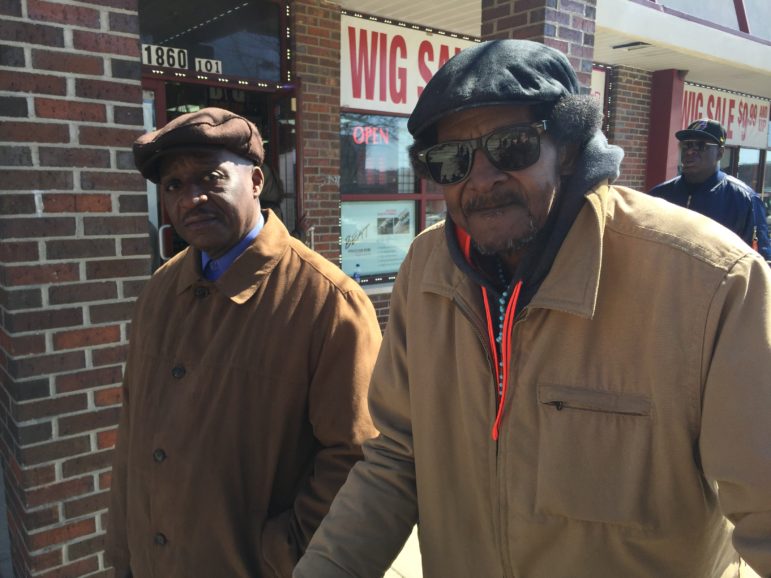 Charles Clay (right) and Robert Ball say the opportunities for black laborers in major city developments have been limited for decades. (Photo by Tom Lisi/PublicSource)

Charles Clay, a retired construction worker, was glad to hear a black-owned developer was part of the Penguins’ new cast of partners and said young Hill residents need more job opportunities. “There aren’t any minority businesses here anymore,” he said, comparing today’s Centre Avenue commercial strip, which has vacant storefronts and lots, to the vibrant area that never returned after rioting in response to the 1968 assassination of Martin Luther King Jr.

Commercial strips in the majority-black neighborhood continue to struggle after decades of disinvestment.

Clay said he was the only black laborer he saw working on the Hill District’s Crawford Square development, a mixed-income housing development completed in 1999.

Lavelle said he expects the new development to be an opportunity for community members.

“So the goal is to ensure that all jobs — pre-construction, construction, post-construction — are absolutely accessible to community residents of the Hill District and beyond,” Lavelle said. “Whether they be the actual physical construction job, the service job at the hotel afterwards or with one of the anchor tenants that show up.”

Carl Redwood, Jr., a board member of the Hill District Consensus Group, has criticized the agreement between Hill District leaders, the Penguins and city officials, saying it does not go far enough to guarantee affordable housing and community approval from Hill residents.

Nothing in the agreement requires the Penguins’ plan to fulfill a certain level of affordable housing or minority-business participation, but Lavelle said the announcement that Intergen will oversee the building of 500 units doubles the minimum participation goal for minority-owned businesses on the developer side.

Intergen has not finalized its capital plan to fund the initial stage of the project, Lavelle said, but he expects the developer to pursue tax credit programs that help builders recoup missing revenue from the affordable units.

Intergen and BPG did not respond to interview requests for this story.

With new public details, residents are beginning to consider their potential impact. Almost 10 years after the completion of the PPG Paints Arena, the old home of the Penguins is currently a sprawling parking lot.

“It’s hard to get excited or nervous or anything because you’re still waiting for somebody to actually break ground, to say, ‘OK, now things are happening,’” said Rosalyn Guy-McCorkle, president of the Crawford Square Homeowners Association. “Right now, it’s like meeting after meeting, proposal after proposal.”