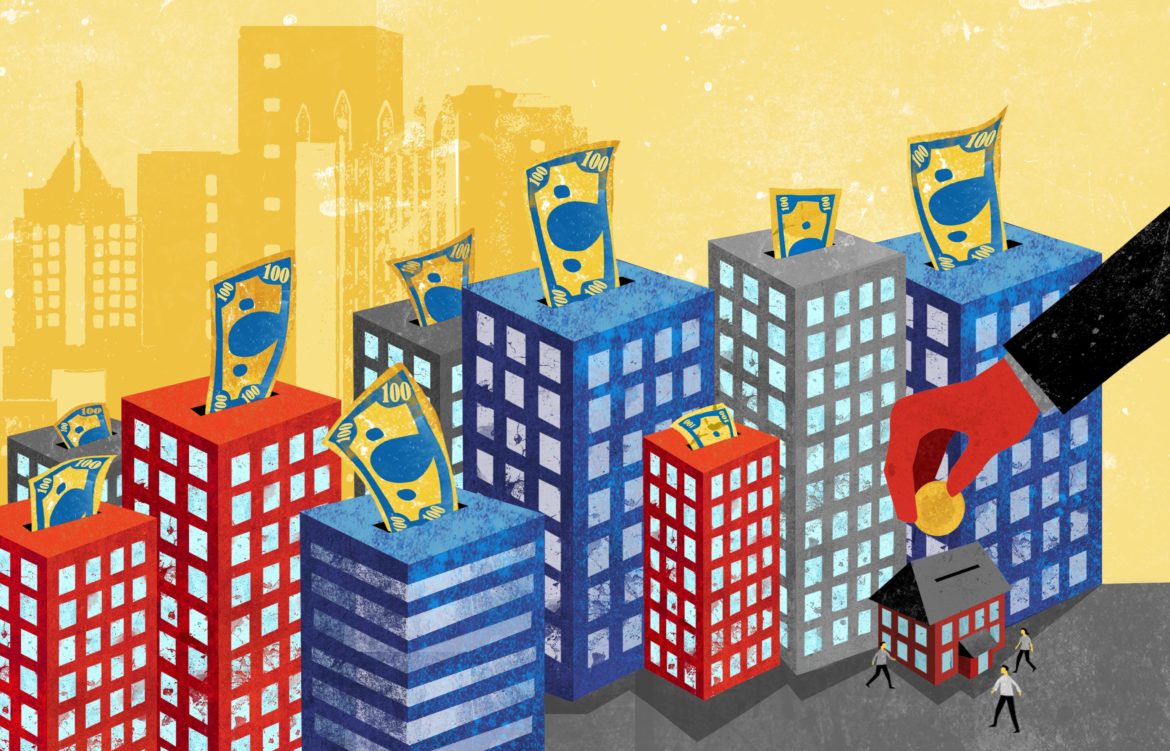 Inclusionary zoning is one tool the Affordable Housing Task Force is considering to address the city’s mix of market-rate and affordable housing. (Illustration by Anita DuFalla/PublicSource)

In May 2016, the City of Pittsburgh’s Affordable Housing Task Force prepared a report recommending several affordable housing policies to the Mayor’s Office. The task force noted the “compelling need to address the changing landscape of housing affordability in Pittsburgh.” Of the housing proposals, mandatory inclusionary zoning sticks out as potentially one of the most effective policies. However, the legality of inclusionary zoning in Pittsburgh depends on how the policy and its goals are framed at the outset.

Inclusionary zoning is defined as any mechanism under local law that requires or encourages private-sector developers to construct affordable units. The task force’s proposal has all the hallmarks for the potential enactment of a mandatory inclusionary zoning ordinance.

The report notes that a density bonus should be one of several compliance mechanisms, which gives developers “height and density in return for the provision of affordable housing.” The task force additionally recommends a citywide set-aside scheme for projects that exceed 25 units. This would require a developer to “set aside” a percentage of low-cost units on a new development if the developer receives “direct public subsidy.”

The report also proposes the creation of an affordable housing opportunity overlay zone, where all new development would be required to include 5 percent low-cost units and a minimum of 15 to 20 percent low-cost units for developers benefitting from the public subsidy. The goal being to ostensibly mitigate rising rents and displacement by targeting neighborhoods with highest return on investment. Alternatively, if a developer is unable or unwilling to provide any low-cost housing, then the developer could choose to pay a fee or agree to build off-site housing elsewhere in the city or improve existing, albeit substandard, housing.

As for affordability, the task force suggests the policy should target household incomes that fall below or at 50 percent area median income for renters and 80 percent for homeowners.

Most inclusionary zoning ordinances require developers to comply with one or more of the abovementioned conditions in exchange for a building or land-use permit.

But the legal terrain for inclusionary zoning is an uncharted area of housing policy in Pennsylvania. Let’s unpack some of the legal implications.

Builders and developers in other states have sought to have inclusionary zoning ordinances struck down by courts as unlawful “exactions.” An exaction is a requirement that a local government imposes as a condition to approving a developer’s land-use or building permit.

The exaction, however, becomes unlawful if a city conditions the permit approval on the requirement that the developer pay monies to the city, dedicate property to the public or make improvements to other infrastructure in the city that does not have a rational or direct connection to negative impacts caused by the developer’s building project. The exaction is a legal trap that cities can easily and unknowingly walk into.

Why the language is important

City officials walk a fine legal line when the language in new policy proposals read like exactions. The task force report is no exception. The report states that inclusionary zoning will “help neighborhoods with rising rents to retain a mix of housing by incorporating lasting affordability into new buildings.” This is in response to “concerns that the rapid increase in rent and home values were putting people, from families starting out to seniors, at risk of having to leave their neighborhoods.”

At first blush, most observers, especially supporters of the policy, would find nothing amiss with the goal of alleviating “rising rents” by imposing “lasting affordability” into new development to mitigate displacement in Pittsburgh. However, the task force report is inadvertently using language that, if accepted and employed by City Council or the Mayor’s Office, could unintentionally give the impression that the proposed ordinance is an exaction.

So what’s the legal rub?

The abovementioned language from the report could be interpreted to mean that “rising rents” and lack of or loss of affordable housing and displacement throughout the city is a public harm caused by a particular new market-rate development, and thus the intent of the inclusionary housing condition is to force developers to fix the housing shortages and affordability problems they might have created.

And therein lies the legal rub.

The construction of a new exclusively market-rate residential building in, for example, the South Side, in and of itself, does not usually cause, in any direct sense, rising rents or lack of affordable housing in Lawrenceville, East Liberty, or anywhere else in the city.

Like the pothole analogy, rising rents and lack of affordable units are arguably a public harm. It threatens to displace families, potentially segregates neighborhoods and may deepen concentrated poverty. However, it would be very difficult for the city to prove in court that a developer’s new market-rate housing in the South Side somehow has a direct effect on the problem of rising rents and lack of affordable units in Lawrenceville. If there is no direct connection, then courts that view the policy as an exaction will likely find the requirement to build affordable units on-site or off-site to be unreasonable.

How to do it right: Promote ‘general welfare of the community’

There is a way to avoid the exaction trap. The stronger argument for inclusionary zoning is to emphasize the policy as promoting the “general welfare” broadly through well-established “police powers,” instead of framing the policy to target developers to fix rising rents and displacement.

A city’s police power supports the longstanding proposition that pursuing a well-balanced neighborhood and community is a reasonable policy that is certainly within the broad and inclusive authority to regulate land-use for the “general welfare.” Most states authorize local governments to wield this power broadly in a manner best suited for its residents.

Pennsylvania has plenty of statutory authority giving the City of Pittsburgh broad discretion to serve its residents. Most notably, as a second-class city, Pittsburgh is subject to the Home Rule Act, which empowers the city “to regulate, restrict or determine… the use and occupancy of buildings…” for the purpose of promoting health, safety, morals or the general welfare of the community.

"The city should focus its inclusionary zoning proposal primarily, if not solely, on the broad goal of improving the ‘general welfare’ of Pittsburgh residents by promoting affordable development and economic integration."

This language should be the foundation for the task force’s inclusionary proposal if it wants City Council to enact a legally sound ordinance. In other words, the city should focus its proposal primarily, if not solely, on the broad goal of improving the “general welfare” of Pittsburgh residents by promoting affordable development and economic integration through “land-use regulations” and “price controls.” Why?

The language supports the position that the city has a rational basis (i.e. a legitimate governmental interest) for inclusionary housing. This invokes a less stringent standard of review by courts than the strict and demanding exactions criteria. It would be very difficult for a developer to argue before a court — let alone convince the general public — that integration and dispersal of affordable housing are not legitimate city interests and that the developer should not bear some of the costs to advance these interests.

Indeed, imprecise semantics could leave an arguably effective housing policy vulnerable to intense constitutional scrutiny. The language between the two frameworks — exaction v. land-use regulation — is ever so slight, but ever so important for the legality of inclusionary zoning in Pittsburgh.

Gerald S. Dickinson is a law professor at the University of Pittsburgh School of Law, who focuses his teaching and scholarship on constitutional property, state and local government law and affordable housing law and policy.