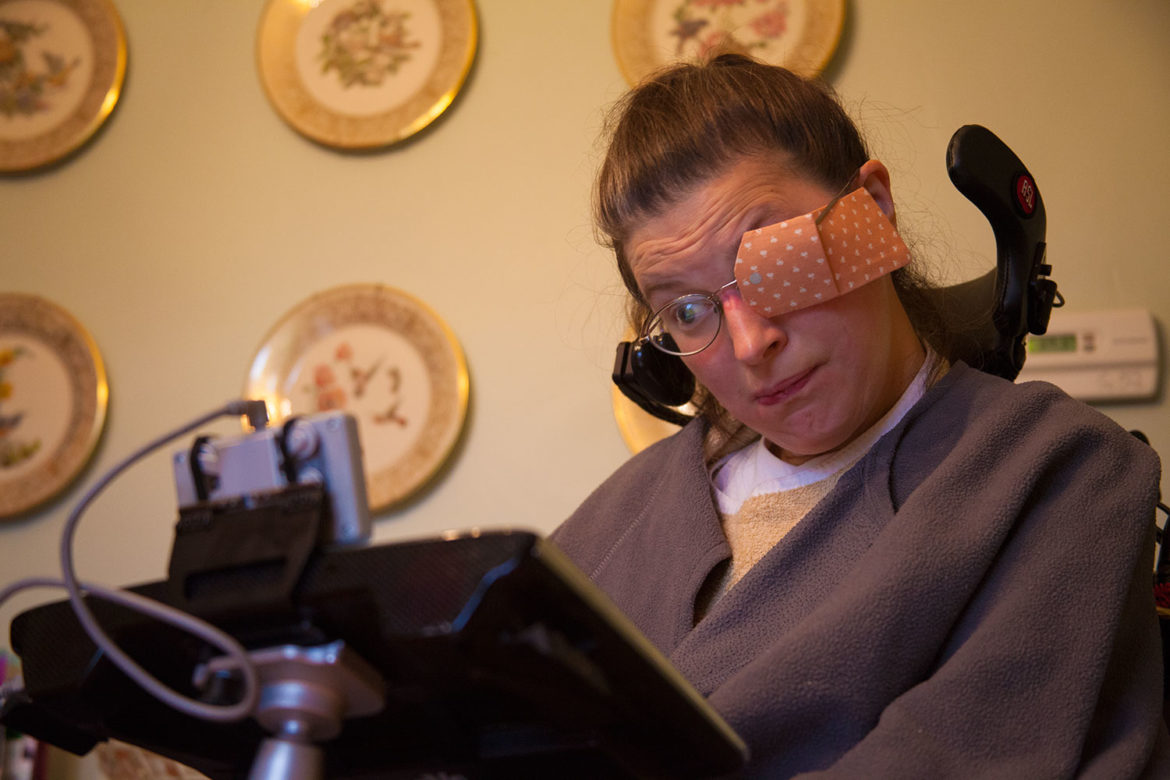 Update: The public has until Saturday, Dec. 6, to submit comments on Medicare's coverage of speech-generating devices and related technology.The Centers for Medicare and Medicaid Services is reconsidering the policy after changes caused a backlash by people who use the devices and their advocates. The majority of 450 comments so far followed the release of a statement from a patient advocacy organization that could be used as a template.

Her voice and hands sapped by ALS, Mount Lebanon resident Mara Sweterlitsch uses a speech-generating device to write and print out questions for her next doctor’s appointment.

Jennifer Lowe, a 46-year-old Brighton Heights woman with cerebral palsy, handles email and phone calls through her communication device to work as an education consultant for students with disabilities.

Isolated in a public housing unit in the North Side of Pittsburgh and paralyzed by ALS, Vaughan Thomas hears about school from his two preteen kids by texting with them from his device. With his eyes, he selects each letter in notes delivered to his children, who live with their mothers.

For the better part of a year, people who have speech impairment or loss, feared that a sudden, and painfully literal, reinterpretation of Medicare policy would diminish their abilities to communicate. Their advocates and the makers of communications devices also worried about how the changes might affect them.

Since 2001, Medicare has paid for the basic communications device, which costs an average of about $6,000, and the beneficiary could pay for upgrades, like the Internet, phone or functions of a TV remote or thermostat.

Beginning in April, the Centers for Medicare and Medicaid Services (CMS) said beneficiaries could not get upgrades for the devices until after a 13-month rental period.

Then, the agency said that as of Dec. 1 they would no longer approve devices on which these functions were ever possible. In other words, even if the beneficiary wanted to pay for the add-ons, they couldn’t.

Medicare wouldn’t explain why they were doing this, not to PublicSource and not to about 200 lawmakers who sent a letter to CMS in September.

U.S. Rep. Tim Murphy, a Republican who represents parts of Southwestern Pennsylvania and is chairman of a subcommittee with public health oversight, sent a letter Nov. 4 demanding answers for what he called a “cruel and uncompassionate” act.

Two days later, Medicare backpedaled on the tough-guy approach it had taken for several months, calling for a 30-day public comment period as it considers updating the coverage policy to include beyond-speech technology. The comment period ends Dec. 6.

CMS expects to issue revisions to the policy in July.

While some are taking this as a good sign, Lewis Golinker, director at the Assistive Technology Law Center in Ithaca, N.Y., is not as trusting, and he says there are other concerns that are still not addressed, such as routine denials of eye-tracking technology.

“One can view this notice as an attempt by CMS to appear responsive to all the concerns expressed, but to take no action that has any substantive effect,” he said.

CMS’ move may actually extend the confusion. Some manufacturers began sending out devices with the add-ons blacked out months ago as the policy’s meaning was debated.

They didn’t want to give already vulnerable people a preview of what might be quickly taken away from them. Without a definitive answer from CMS, more people with speech loss could be denied opportunities to communicate like any other person.

Someone who already owns their device wouldn’t be affected unless the policy does ultimately change and they have to get it replaced.

Medicare has paid for 2,000 to 3,000 devices annually in the United States since it started covering them in 2001.

At that time, gaining the ability to have a face-to-face conversation was a godsend. Many of the technological innovations were available then, but not so ingrained in society as they are now.

Following the 2001 Medicare coverage policy literally would have effectively eliminated any glimmer of independence that many people had become accustomed to.

About 75 percent of people who use speech-generating devices from manufacturer Tobii Dynavox, which has a headquarters in Pittsburgh, unlock their devices. Tobii Dynavox president Tara Rudnicki equated taking away the extras to saying, “You are not important enough to engage in society.”

Andrew Jinks, a speech pathologist at the Center for Assistive Technology in Pittsburgh, said the ruling would force manufacturers to time warp the devices back to the 1980s. “It’s like having a smartphone and taking it back to two tin cans and a string,” he said.

Face-to-face conversation is often too difficult to arrange for these people when a child goes off to college, or when trying to coordinate care through several caregivers and support services. And forget ever having a private phone call; without phone functions on the device, someone else would have to start and end the phone call, and they must talk over the speakerphone.

“To them, it’s not a toy; it’s a lifeline and it’s not frivolous,” said Shelly DeButts, a spokeswoman for United Cerebral Palsy. “It’s difficult for people to understand how restrictive having a disability can be socially and economically.”

CMS hasn’t indicated that cutting these functions is designed to save money.

“[We] have yet to find out the rationale for the change to a policy which, for 13 years, had operated without known fraud and abuse,” said Amy Goldman, co-executive director of the Institute on Disabilities at Temple University.

The potential changes are also affecting the business of speech-generating devices. Tobii Dynavox, one of the largest manufacturers of communication devices in the country, would have to drop two device models that could not permanently lock extra functions.

“Which means a beneficiary does not have the opportunity to have the device that works best for their needs,” Rudnicki said.

Medicare enacted another policy change in April, creating a 13-month rental period before the user owns the device. They used to become owners right away.

Doesn’t sound so bad, but that means the user can’t get email, text or other upgrades for 13 months. Valuable time for someone with any of these devastating conditions.

Another potential consequence has intimidated people who use communication devices: If the user is admitted to a hospital, nursing home, hospice or any other assisted living facility while it’s still a rental, the device will be taken away.

“Those are critical moments to express what kind of care they need,” said Marie Folino, director of care services at the ALS Association’s Western Pennsylvania Chapter.

Sweterlitsch, 47, said her device was crucial to communicate what she needed and what she was feeling during her last hospital stay. “When I was in the hospital, I needed to speak up about errors,” she said.

Medicare provides a fixed payment to facilities, and the facilities are expected to provide equipment during the person’s stay there.

However, a communication device is often customized to work especially well for that one person and it takes time to make the adjustments and for the user to learn to use it. Plus, many facilities don’t have the budgets to provide them.

Bruce Baker, the founder of Minspeak, a language system used on many devices, said the rental structure has also put a financial strain on his Castle Shannon company, Semantic Compaction Systems. They’re used to being paid for the device outright, which allows them to make frequent technology upgrades. With the payments spread out, Baker said they’re having trouble keeping up with waves of new technology.

Baker is optimistic that an updated coverage policy will reverse that change.

“I just can’t believe the federal government would do something quite as negative,” he said. “I think reason will prevail.”

Speech-generating devices are needed by people with multiple disabilities.

Some people, like Mara, use a head-controlled mouse. Others may be able to use their hands or even their toes.

And then there are people like Thomas, who is almost completely paralyzed. He can still smile, especially at any mention of his children, but otherwise, he mostly conveys his thoughts by darting his eyes at the appropriate letters or icons.

Eye-tracking technology is one of the most advanced and expensive ways of accessing the communication device.

In fact, Tobii Dynavox, a leader in eye-tracking technology, has taken at least a $1.6 million hit in the last 14 months because it has not been reimbursed by Medicare for the eye-tracking technology it has provided to beneficiaries, Rudnicki said. “You can certainly see how much we have put in and how much we don’t want the beneficiary to suffer.”

But manufacturers have heard the technology has caused CMS to bristle because it is becoming a hot item in commercial products and anyone can use it, so they might wonder if people who don’t need it are jumping to ‘the cadillac’ when they could still be using a head mouse or another cheaper option.

Thomas doesn't see it as a luxury — it bridges the divide between his mind and body.

“It allows me to keep my mind sharp and active instead of dwelling on this disease and sinking into a deep depression.”