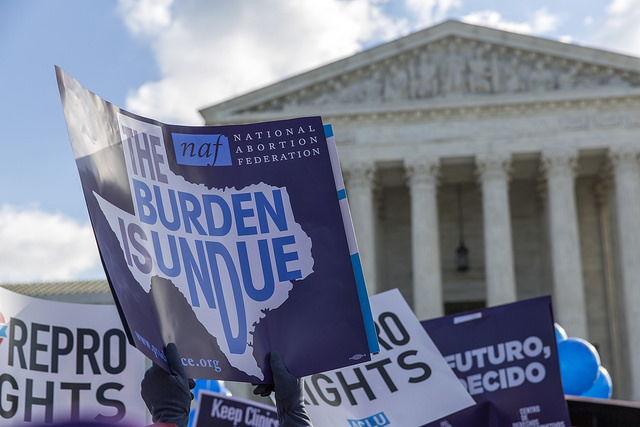 A Texas law that shuttered roughly half of the state’s abortion clinics has been rejected by the U.S. Supreme Court.

The Monday ruling is seen as a major victory for supporters of abortion rights and could impact regulations in other states that have imposed restrictions on abortion providers.

Nearly three years ago, Texas lawmakers passed a law to require doctors performing abortions to have admitting privileges at nearby hospitals and for clinics to meet the same standards as ambulatory surgical centers.

The law, which medical groups said would not improve patient safety, was viewed as a way to close clinics under the guise of eliminating risk to women seeking abortions.

In striking down the law, the Supreme Court said the legislation fails the “undue burden” test established in 1992 in the Planned Parenthood v. Casey decision. That case involved a challenge to abortion restrictions in Pennsylvania, and the court’s ruling reaffirmed Roe v. Wade while also saying that states could impose restrictions on abortions so long as they did not create an undue burden on women.

The court’s 5-3 ruling Monday concluded that the Texas law does not give sufficient medical benefit to justify the restriction in access, which closed most clinics outside the state’s major metropolitan areas.

From the majority opinion, written by Justice Stephen Breyer:

We conclude that neither of these provisions offers medical benefits sufficient to justify the burdens upon access that each imposes. Each places a substantial obstacle in the path of women seeking a previability abortion, each constitutes an undue burden on abortion access… and each violates the Federal Constitution.

In a dissenting opinion, Justice Clarence Thomas writes that the court has improperly applied the “undue burden” test, improperly takes control from states on how to address debatable science and continues the court’s habit of using different standards for different issues.

Today’s decision will prompt some to claim victory, just as it will stiffen opponents’ will to object. But the entire Nation has lost something essential. The majority’s embrace of a jurisprudence of rights-specific exceptions and balancing tests is “a regrettable concession of defeat—an acknowledgement that we have passed the point where ‘law,’ properly speaking, has any further application.”

According to an analysis by The New York Times, Pennsylvania is among many states that makes abortion clinics meet the same standards as ambulatory surgical centers.

The state’s restrictions are among the tightest in the nation and were imposed following the investigation of Kermit Gosnell in Philadelphia who was later found guilty of first-degree murder for the deaths of three infants and of involuntary manslaughter related to the death of a patient.

Like Texas, many states require doctors to have admitting privileges, according to the Times. That goes beyond Pennsylvania’s law and was vehemently opposed by abortion rights advocates in Texas.

Just how today’s ruling will impact other states remains to be seen, but the ruling deals a significant blow to lawmakers nationwide imposing new rules that make it more difficult for women to get abortions.

As PublicSource reported in May, the scarcity of abortion providers in the region has made Pittsburgh a destination for women seeking abortions.

In 2014, nearly half of the women who got abortions in Allegheny County lived elsewhere.

Volunteer escorts say they’re trained to identify women seeking care by looking for out-of-state license plates from surrounding states, including as far away as New Jersey.

Lawmakers in half the states imposed nearly 300 abortion restrictions from 2010 to 2015. According to the Guttmacher Institute, a research organization focusing on reproductive rights, 89 percent of the nation’s counties lacked an abortion provider in 2011.

Pennsylvania has 19 abortion clinics, according to state data. Two of those are located in Pittsburgh. In several counties, women have to travel at least an hour to reach the nearest clinic, according to a PublicSource analysis based on data from the Times.