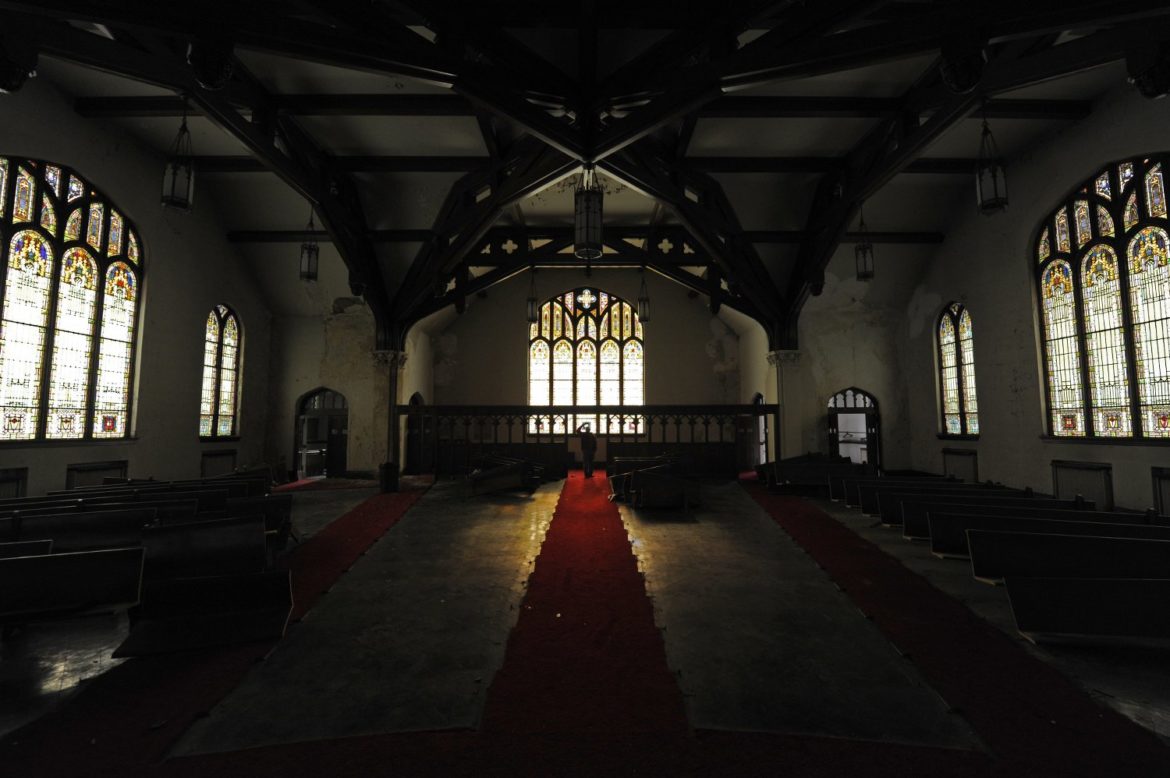 “I stood there not taking much from the sermons, and people would sing and shake my hand and I felt very uncomfortable and out of place,” Burk said.

Burk, who lives in Pittsburgh and is an instructional aide to children with autism, doesn’t identify as atheist but does not believe in God or practice religion.

She says it stems from the fact that she was raised in a family with one Christian parent and one religiously unaffiliated. To avoid conflict, the family treated religion “just as if it wasn’t ever a thing,” Burk said. “I grew up without any religion in my household my whole life.”

She’s among a growing group of Millennials, the generation aged 18 to 34, who identify as nonreligious.

As of last year, more than a third of Millennials were considered to be religious “nones” — the unaffiliated, agnostic or atheist population. In 2007, only a quarter of Millennials said they lived outside of a particular faith, according to a 2014 Pew Research Center study. Highland Park resident Olivia Burk, 22, was brought up in a home with one religious parent and one non-religious parent. She credits that difference as the reason she does not identify with a particular faith.

Some worry that this trend will mean Millennials and their children won’t have the same values or beliefs in right and wrong as previous generations.

The decline in religion could also be linked to other Millennial trends. Generally, Millennials are more inclined to live together and have children outside of marriage and are more accepting of homosexuality, among other things that can conflict with religious norms.

“A lot of people are disaffiliating from the religion they were raised [with] primarily for political reasons,” said Melissa Wilde, a religious sociologist at the University of Pennsylvania. “They see their faith as much more conservative than they are.”

Without attending weekly sermons, Millennials are looking to other outlets for a moral education. That has left churches scrambling for innovative ways to bring Millennials to the pews, but churches of most denominations have been losing members and merging or closing churches.

Yet even as Millennials become less religious, that doesn’t mean religion doesn’t interest them.

Get more information about these religions.

Pittsburgh resident Daniel Berton, who is awaiting certification in the operating engineers union, was raised a Presbyterian Christian and attended church every Sunday. He was enrolled in Sunday school until he was 15.

Of his four-person family, only his mother still goes to church regularly.

Presbyterians undergo Confirmation, a rite of initiation and membership into the congregation, as young adults. When Berton began preparing for the ceremony, he started to ask his pastor and the other students some difficult questions.

“Some of the questions I was asking were, ‘If there is a God, why is he or she allowing such terrible things to happen?’ And nobody could come up with an answer for me,” said Berton, 22. “So I tried looking on my own.”

There are numerous reasons Millennials are giving up religion. According to a 2012 report by the Public Religion Research Institute [PRRI], some people aren’t content to accept the existence of God on faith and feel religion goes against science. Some find organized religion too constricting and conservative. Others find the church’s teachings hypocritical.

PRRI’s data indicate that 7 percent of Americans were raised unaffiliated with any religion, but that more than 19 percent of all Americans identify as atheist, agnostic or nothing in particular.

The four largest religious groups in the country are Catholics, white evangelical Protestants, the religiously unaffiliated and white mainline Protestants, according to PRRI, a nonpartisan research institute based in Washington, D.C.

Christianity makes up the vast majority of religions in Pennsylvania, at 73 percent of all religious membership, according to Pew’s 2014 study on religion. Overall, non-Christian faiths form about 6 percent of the landscape in both Pennsylvania and U.S. religions.

Of the people abandoning religion, studies show many of them are Christians leaving the flock.

“Young adult Catholics are doing among the worst. They have the worst retention ... whereas the Mormons are doing great,” Wilde said. “Others, like mainline Protestants, are doing pretty bad” in terms of numbers and retention as well, she said.

Among Christians, Catholics have the lowest retention rate of any denomination. White mainline Protestants are the next most likely to abandon their faith. College graduates are also more likely to drop their religion than those without degrees, according to PRRI.

Berton’s childhood religion, Presbyterianism, is a subgroup of mainline Protestantism.

“The more that I got told, ‘You have to have faith,’ the more faith I lost,” he said. Morningside residents Erica and Declan Wilson have decided to raise their son, Henry, as a Catholic so that he can share the faith with his father. Erica Wilson, however, said she is not religious.

As a baby, Erica Wilson was baptized Catholic, but she never attended church.

Wilson and her siblings were baptized, a ritual of church admittance, out of consideration for their devoutly religious grandmother.

“I never considered myself anything,” Wilson said. “We never went to church… I didn’t really have an opinion on [religion].”

Now 25, a third-year pharmacy student at University of Pittsburgh, Wilson is married to devout Catholic Declan Wilson, also 25. Together, they have a 6-month-old son named Henry, who will be raised with his father’s religion, a decision Erica Wilson says she is comfortable abiding.

“I see how much [religion] means to Declan and I hope it’s a part of their lives,” Erica Wilson said. “I think it’s really great … to have that relationship with their dad.”

Wilde, the sociologist, said people in her field typically associate religion with meaning and belonging. She said religion offers a like-minded community, and faith helps people get through difficult times.

Religion can be a staple in the development of morals. It’s a primary source of introducing values like marriage fidelity and forgiveness.

When people don’t practice religion, they have to find their values elsewhere. Wilde suggested that those without religion might pull values from work or family life and school more readily.

Erica Wilson said she and her siblings and parents have always had a close relationship, even though they’re not united by faith. She said she believes that having a loving household and setting strong examples of kindness is one way to impart values to children.

“You can be a good person without religion,” she said. “A lot of it comes down to your family and society as a whole. I think that a lot of it is ingrained in us as humans.”

She said her son and his future siblings belong to a loving home, and will have that as a backup if they choose not to follow the religion of her husband. Erica Wilson, 25, sits in a coffee shop near her home in Morningside where she frequently studies for her pharmacy degree. Although Wilson is not religious, she and her husband, Declan, who is Catholic, are raising their 6-month-old son in the Catholic faith. Declan Wilson, 25, sits in his usual pew at St. Raphael Church in the East End. Wilson, a Catholic, is raising a 6-month old son in the Catholic faith with his wife Erica, who is not religious.

Daniel Berton said he finds what he values by introspection. He sorts through issues on his own, without influence from religion or politics. He said religious teachings don’t really apply to his life.

“As long as you’re not violating basic human rights like murder or rape, I’m usually OK with it,” he said.

Olivia Burk said she has researched different religions and beliefs along with discussing moral dilemmas at length to help form her values.

“It’s a combination of what I’ve learned...” she said. “Education and science, and also my family.”

Some Christians expect a large-scale revitalization to replenish the numbers as Millennials grow older.

It’s also their hope as congregations diminish over time.

According to the Roman Catholic Diocese of Pittsburgh, more than 630,000 Catholics in Pittsburgh were attending 199 parishes as of 2014. In the diocese, from 1980 to 2010, there was a decrease of about 40 percent in church membership and adherence, according to the Association of Religion Data Archives [ARDA].

Data from the Presbyterian Church of U.S.A. show a rate of about 1.5 church closings or mergers in Pittsburgh per year since 2002, with a loss in membership of more than 30 percent.

Philadelphia closely mirrors Pittsburgh, with a loss of 18 congregations and 26 percent of its members (about 10,000 people) between 2002 and 2012.

Churches have been spicing up services with engaging music and shortening the time commitment to attract the younger population. Campus missionaries seek to evangelize new members to their congregations. A statue still stands in front of what was once Saint Mark Parish in McKees Rocks, an Allegheny County borough northwest of Pittsburgh. A dilapidated church still stands at the corner of Reed and Vine Streets in the Hill District of Pittsburgh.

What’s unclear at this point is whether Millennials will be attracted to religion later in life, out of fear of the afterlife, for healing or for other reasons.

Wilde said that a lot of people do return to their faith when they age.

For a recent graduate like Burk, she said she may someday consider a return to religion but that it’s unlikely.

“Part of me says, ‘Yes,’ because I have done it before,” Burk said. “Part of me is uncertain. Part of me says most likely not. I’m very content with my life and my views.”

Erica Wilson said it would take a life-altering event for her to approach faith.

“I thought it would be having kids,” she said. “But I still haven’t had that. I almost hope it happens, but I obviously can’t force that.”