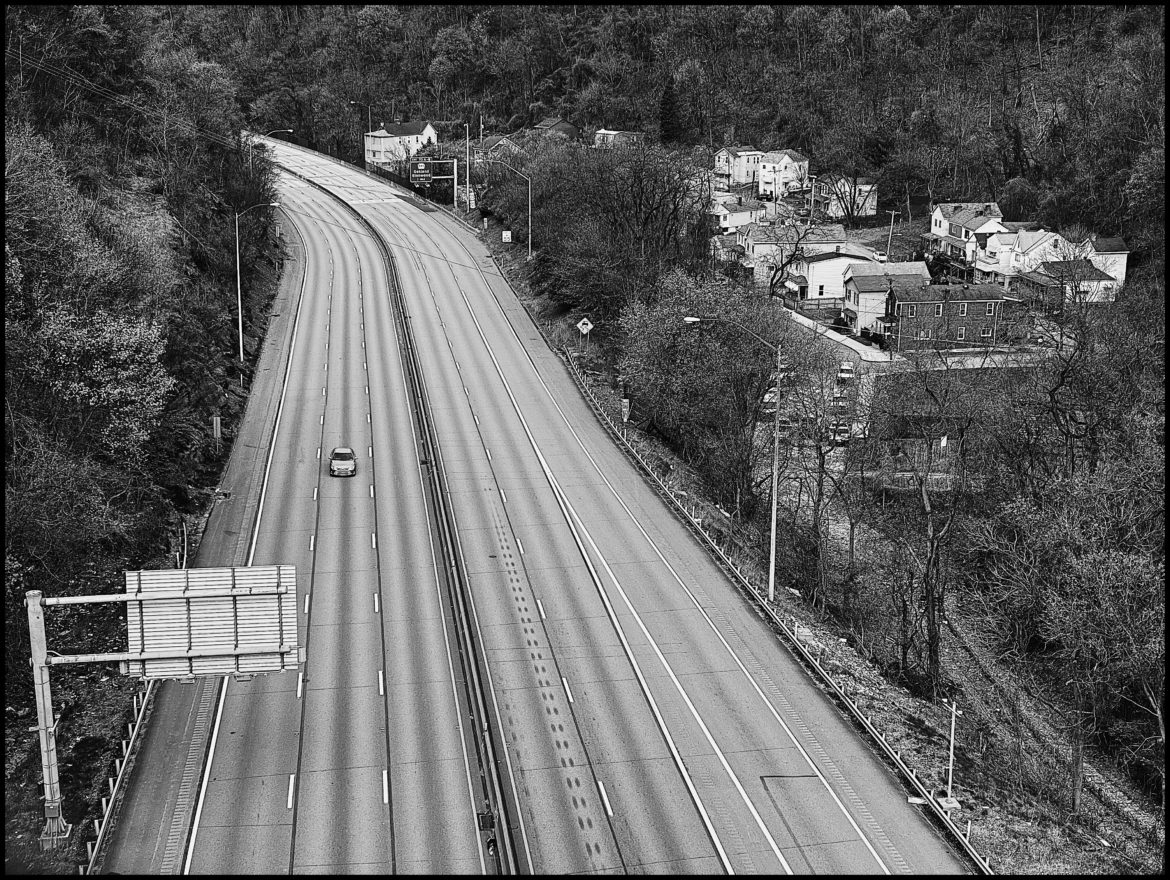 No one will forget 2020. Pandemic, protests, the election — and yet everyone has experienced 2020 in their own way. While its effects appear to cut across lines of class, race and gender, 2020 has also been a year to expose and attenuate the profound inequalities in our society.

These photographs are taken from a personal account of a shared experience, of a journey through a year like no other. They provide, on occasion, a first-hand account of some of the year’s major events, seen from our small city.

Nestled between the Northeast and the Midwest, Pittsburgh is unique, quirky, specific — and a barometer of the country as a whole. What happens in America happens here, in its own, Pittsburgh kind of way.

In Pittsburgh, things changed in early March. A mystery virus was approaching: roads emptied, services shut down, work went online. Zoom replaced travel; toilet paper and baking flour became impossible to find. And so the year unfolded: one thing after another.

Like all of us, I was both a witness to, and participant in, 2020. I was fortunate to have food on the table, and a roof over my head; not everyone could claim the same. The outrage unleashed by the killing of George Floyd at the end of May set off a global reaction, including in my own neighborhood of Squirrel Hill. And then there was the election.

Squirrel Hill, East Liberty, Shadyside, Point Breeze, Hazelwood. These are some of the neighborhoods that comprise Pittsburgh’s East End: diverse, segregated, privileged and deprived. First they became abandoned landscapes; then a staging ground for the expression of a collective anger; finally, a palette for the public expressions of a divided polity.

These photographs reflected my own bifurcated experience of 2020: a year of stress, turmoil, anger, despair, and ultimately, celebration. And simultaneously withdrawing: seeking refuge close to home, in the small things; strolling through the hills and woods of Frick Park; or simply wandering the city, photographing with new eyes.

The pictures are not a comprehensive account of 2020; but they are 2020 as I have seen it.

Everyone has experienced 2020 in their own way. Here is mine. 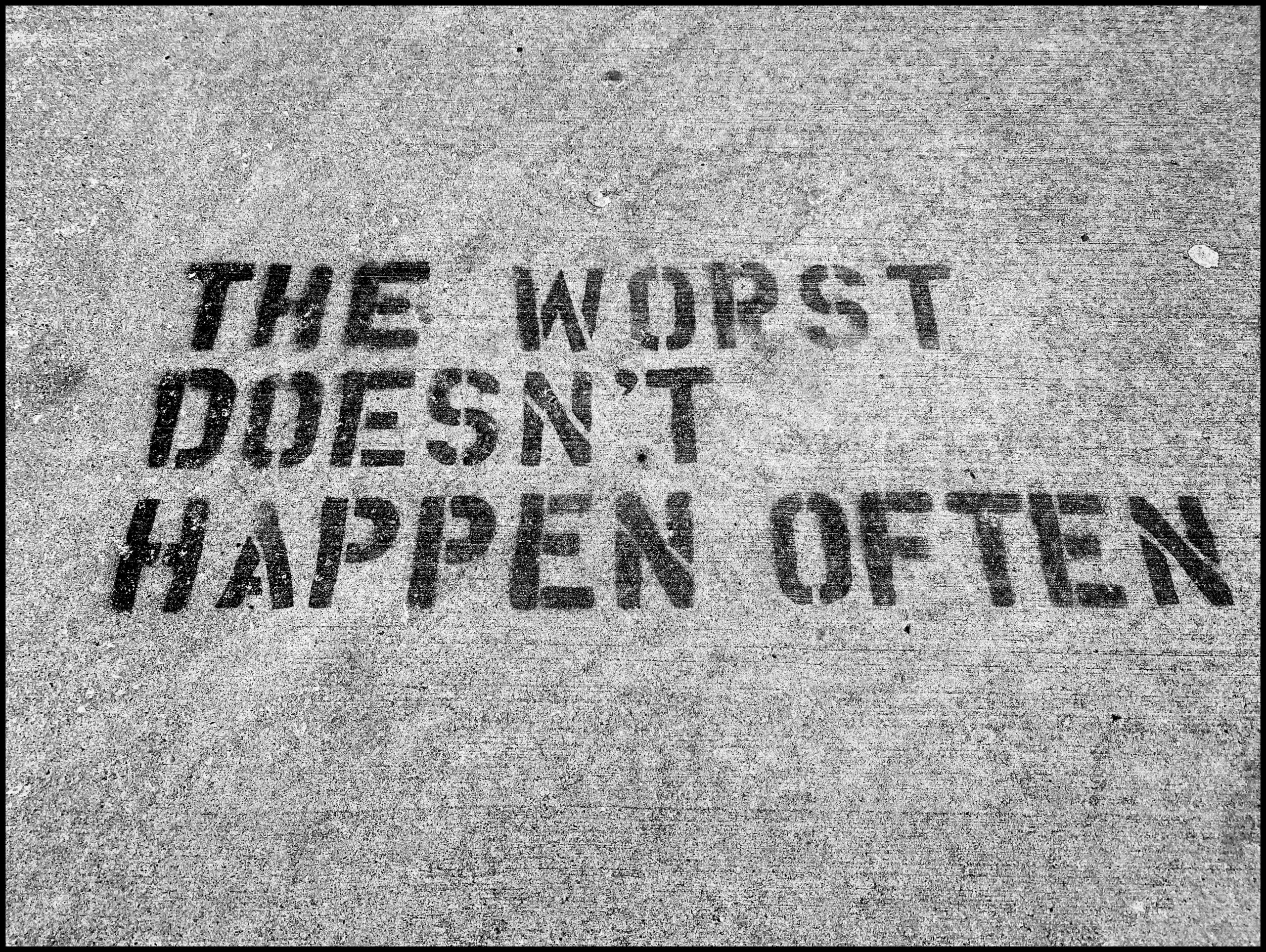 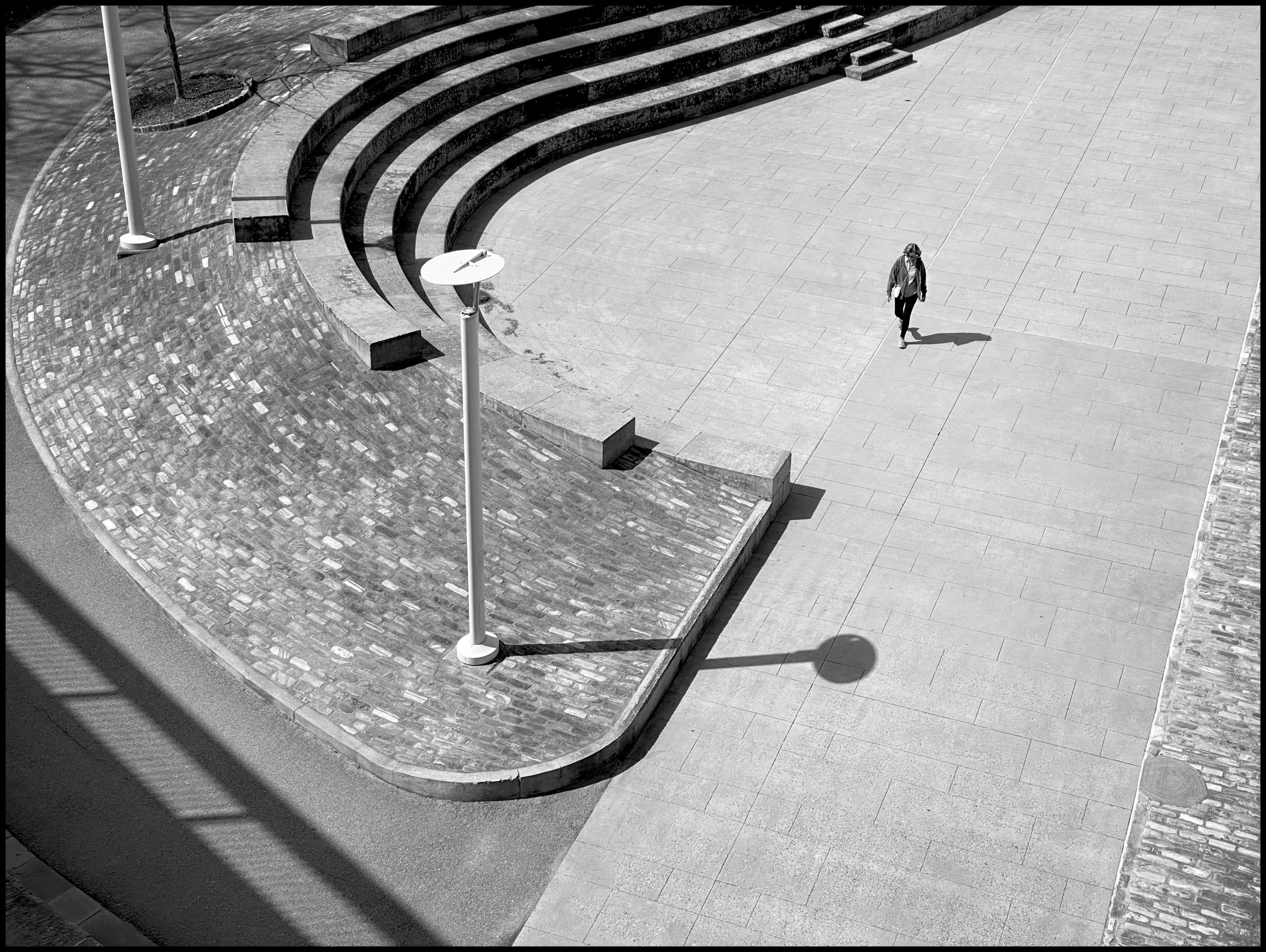 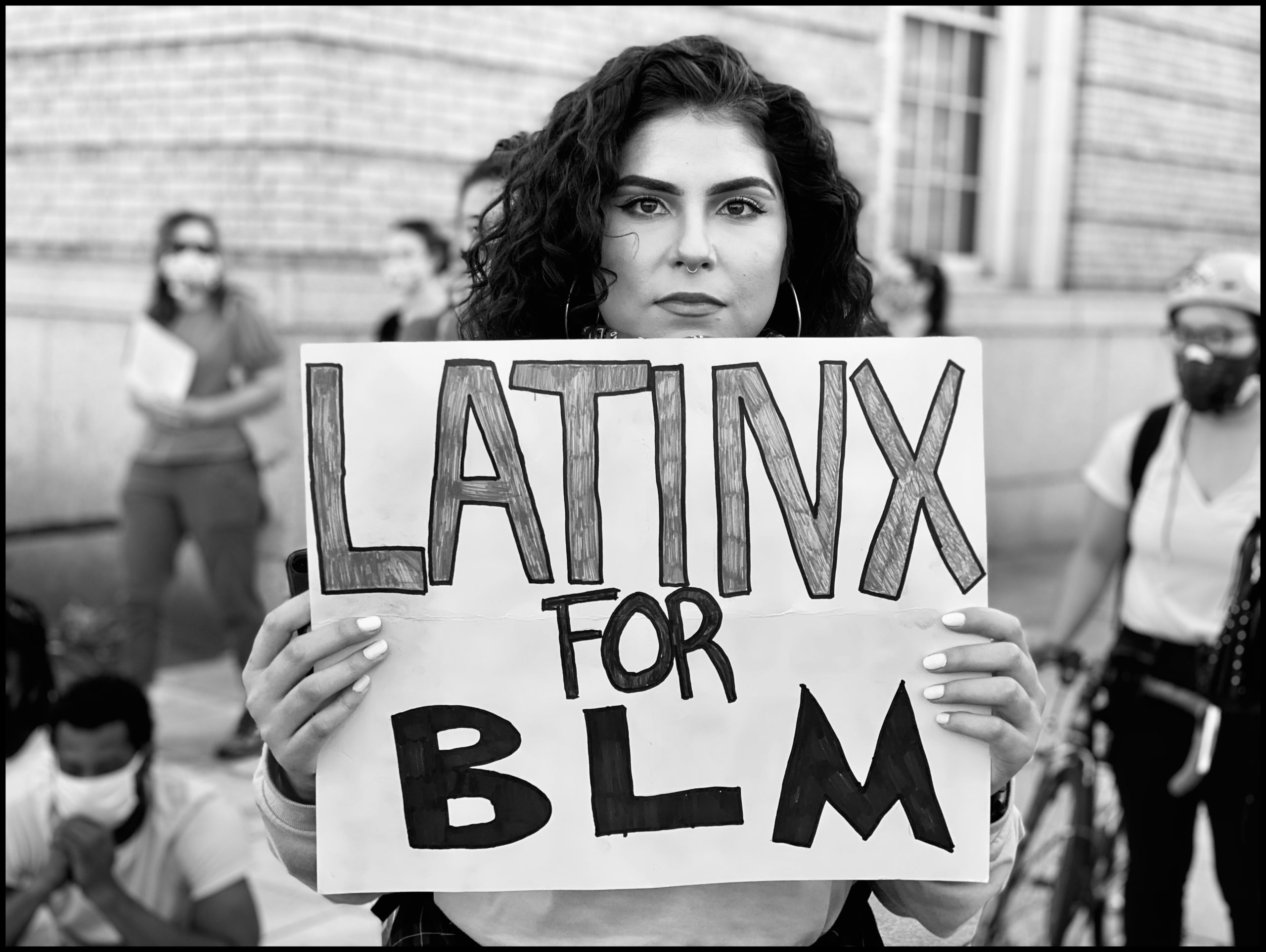 June 1. Demonstration in East Liberty at the beginning of months of social protest. (Photo by Brian Cohen/PublicSource) 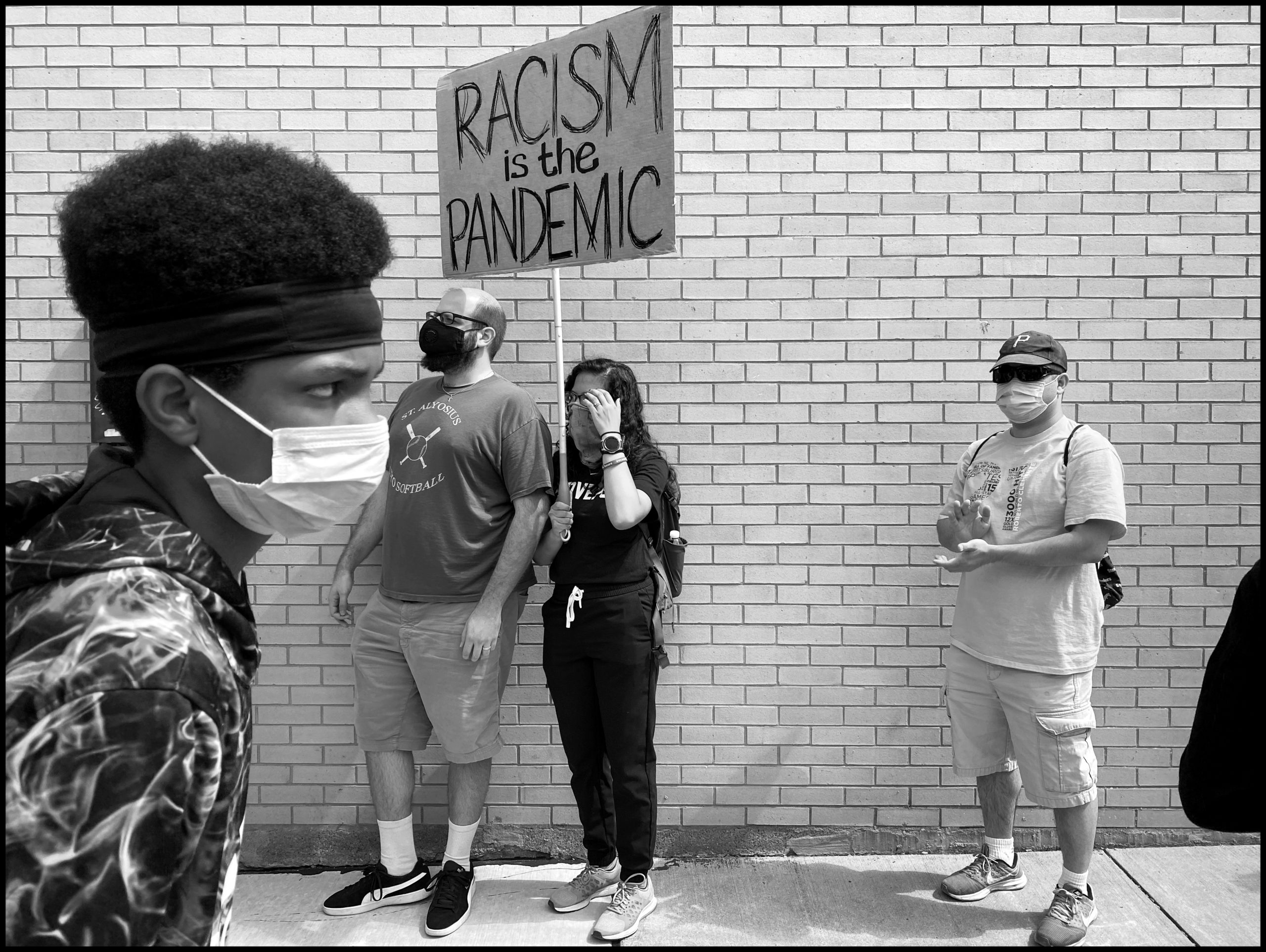 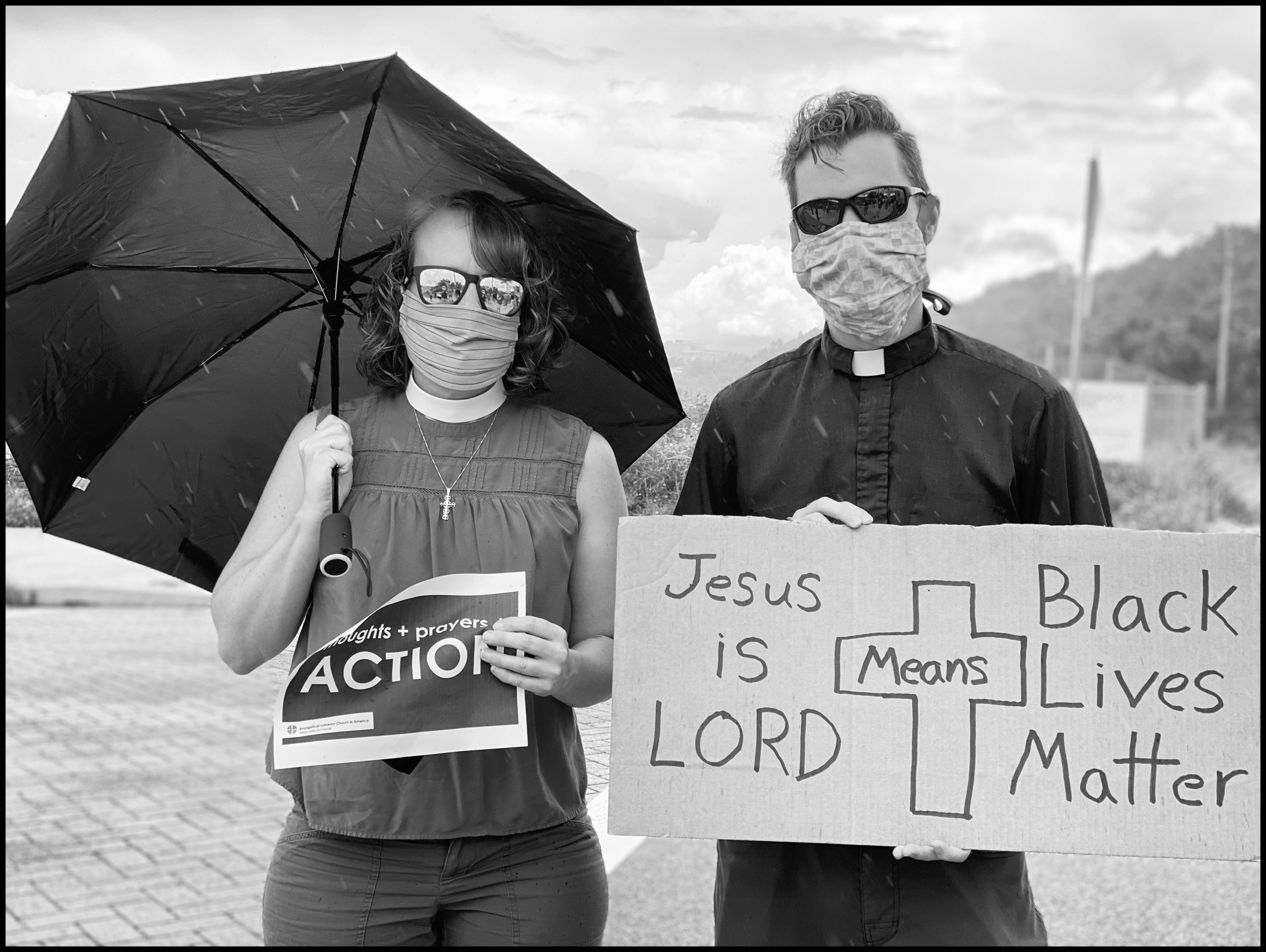 June 19, Juneteenth. At an interfaith rally in Hazelwood. (Photo by Brian Cohen/PublicSource) 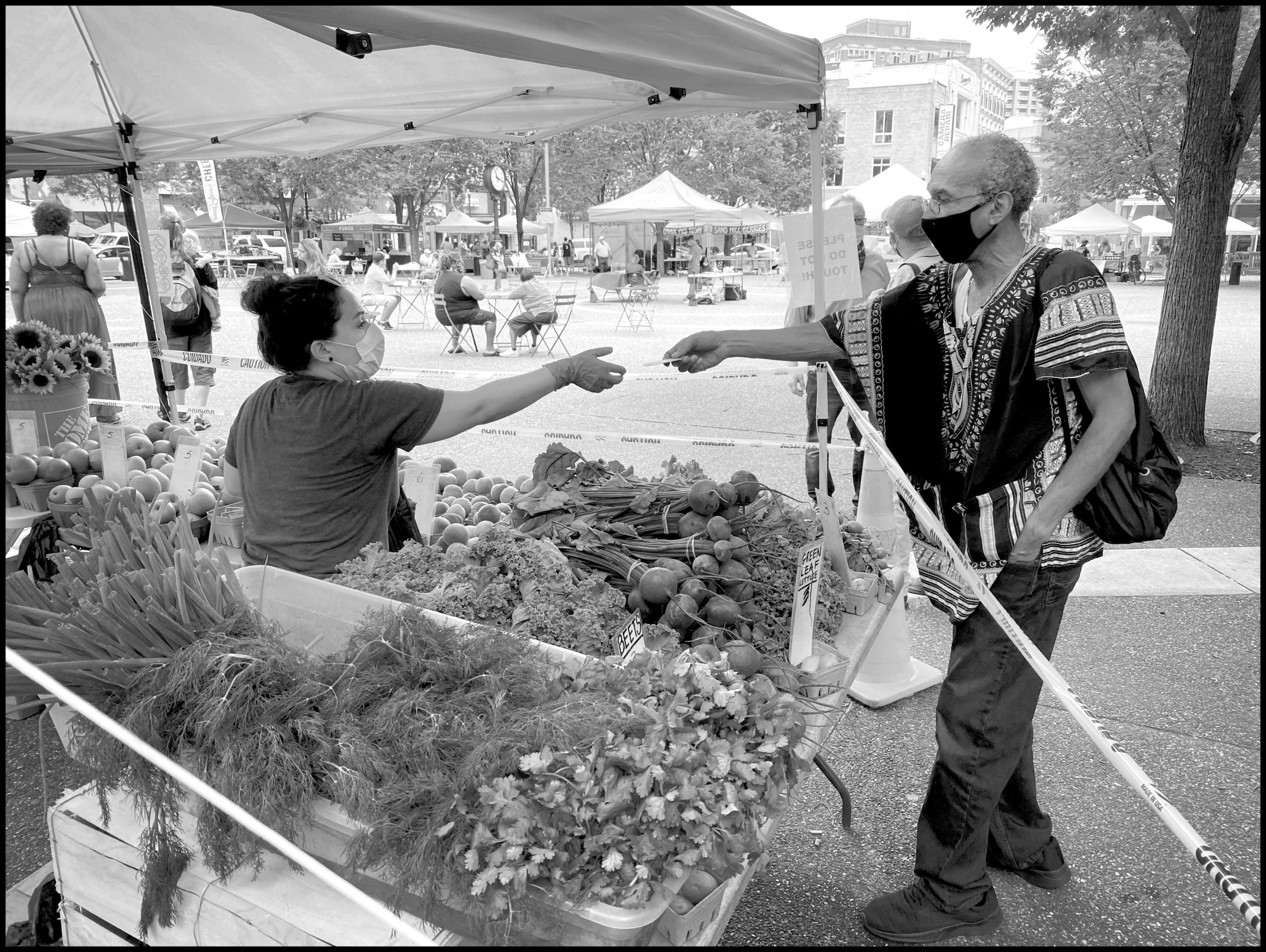 July 16. The Downtown farmer’s market in Market Square. Amid a new spike in cases, masks, gloves and caution tape are the order of the day. (Photo by Brian Cohen/PublicSource) 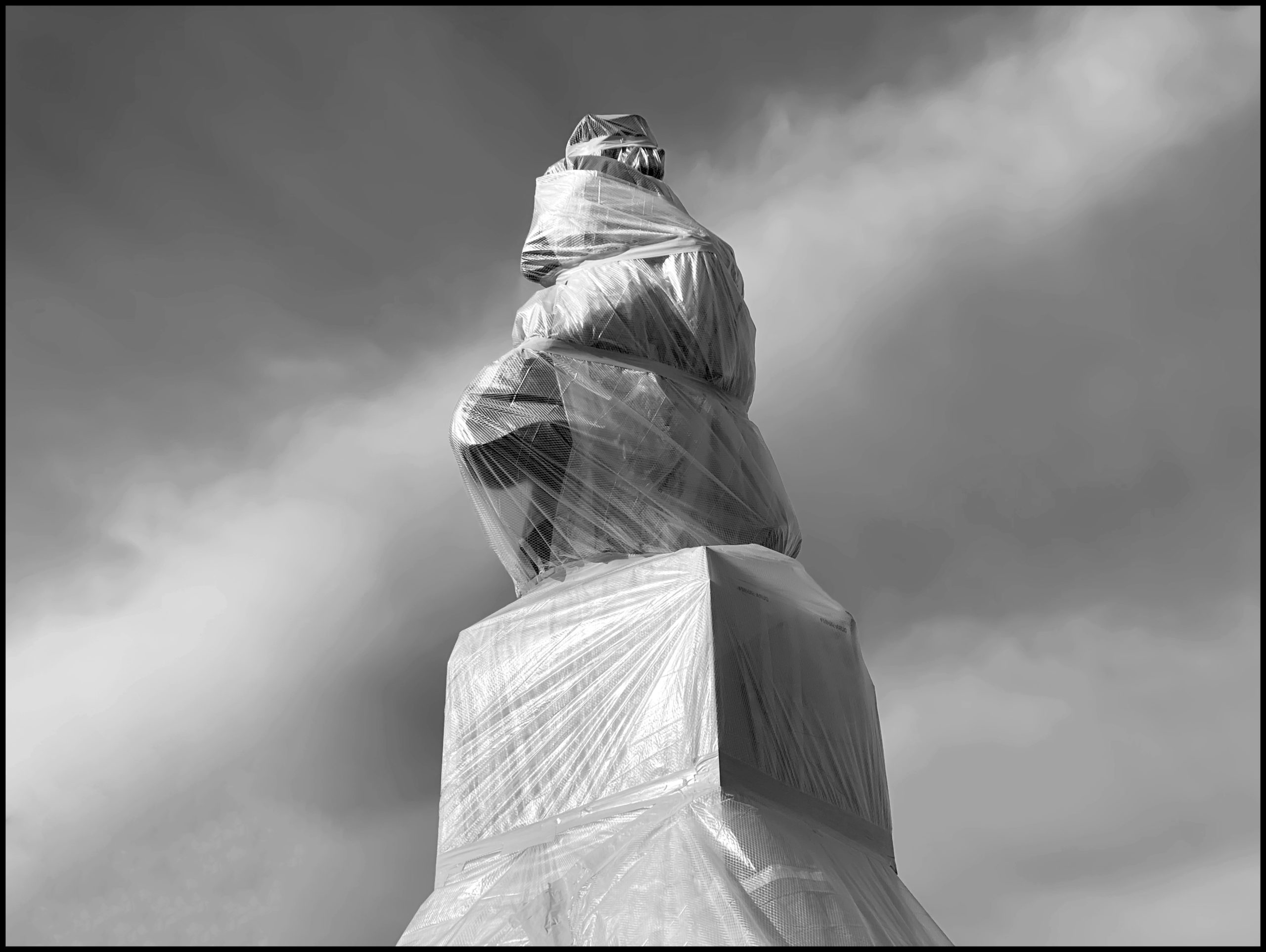 Oct. 14. Swept up in the wave of protest against many public monuments, the Christopher Columbus statue in Schenley Park had been graffitied in June; now it is wrapped in plastic, pending a decision on its future. (Photo by Brian Cohen/PublicSource) 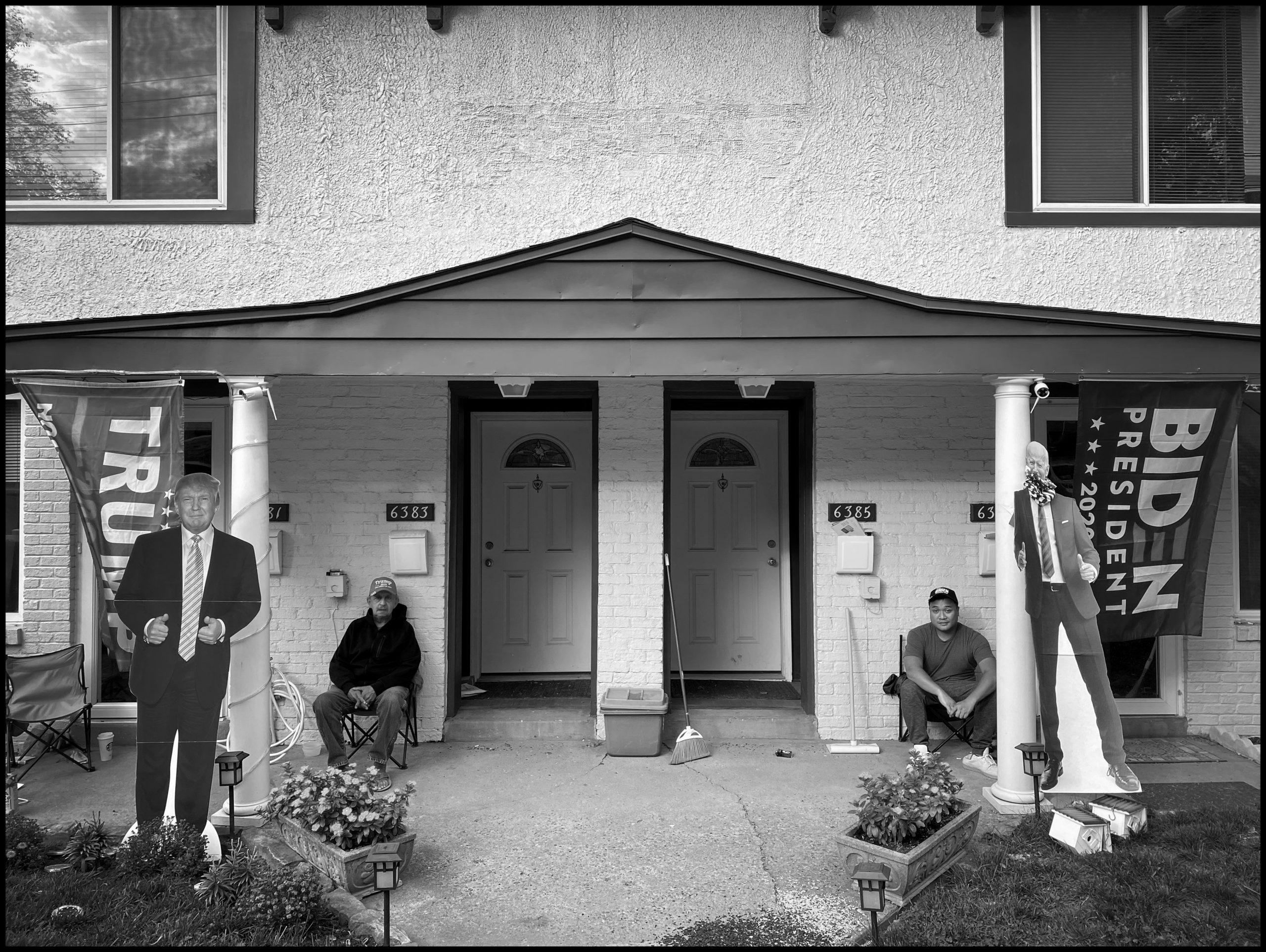 Oct. 15. Squirrel Hill. A family portrait, of sorts: while much of the country was deeply entrenched in a partisan standoff, this uncle and nephew maintained the friendliest of rivalries. (Photo by Brian Cohen/PublicSource) 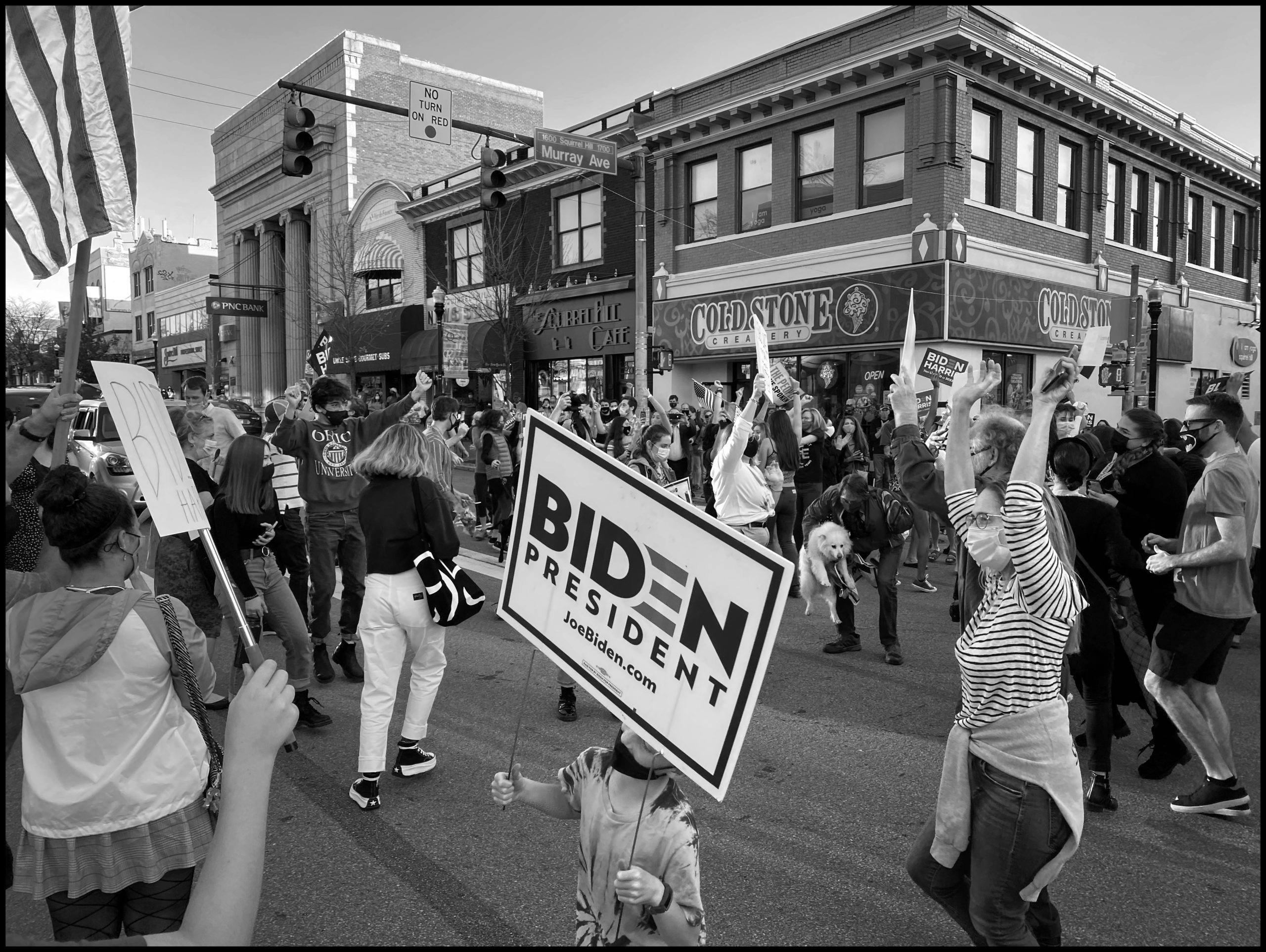 Nov. 7. Squirrel Hill. The election is called for Biden-Harris.Following the synagogue shooting here in 2018, the corner of Forbes and Murray Avenues in Squirrel Hill had been the spontaneous focal point for communal grief; in 2020, it was the place that local people gathered to protest against police violence through the summer, to mourn the loss of Ruth Bader Ginsburg in September, to celebrate the results of the election in November. (Photo by Brian Cohen/PublicSource)

Brian Cohen is a freelance photographer based in Pittsburgh. He can be contacted at bcohen01@gmail.com.