Back in Mexico, Maria Antonio and her husband owned a grocery store. Here, because they crossed the border illegally 13 years ago, they can’t even get driver’s licenses.

It’s an inconvenience compared with the constant robberies and violence they experienced at their store in Chiapas, Mexico.

Maria’s husband was shot in the shoulder once, and they feared for the safety of their family.

Since moving to the Pittsburgh region, Maria’s husband, Concepcion Ulloa, has cleaned movie theaters and worked at a laundromat to make ends meet for them and their three children. To live in safety has been worth the low-paying jobs and the risks, she said.

But Donald Trump’s election as the next president of the United States scares Maria and her counterparts in the Latino community. They are afraid of changes to their way of life because he campaigned on a vow to deport illegal immigrants and build a wall between Mexico and the United States. 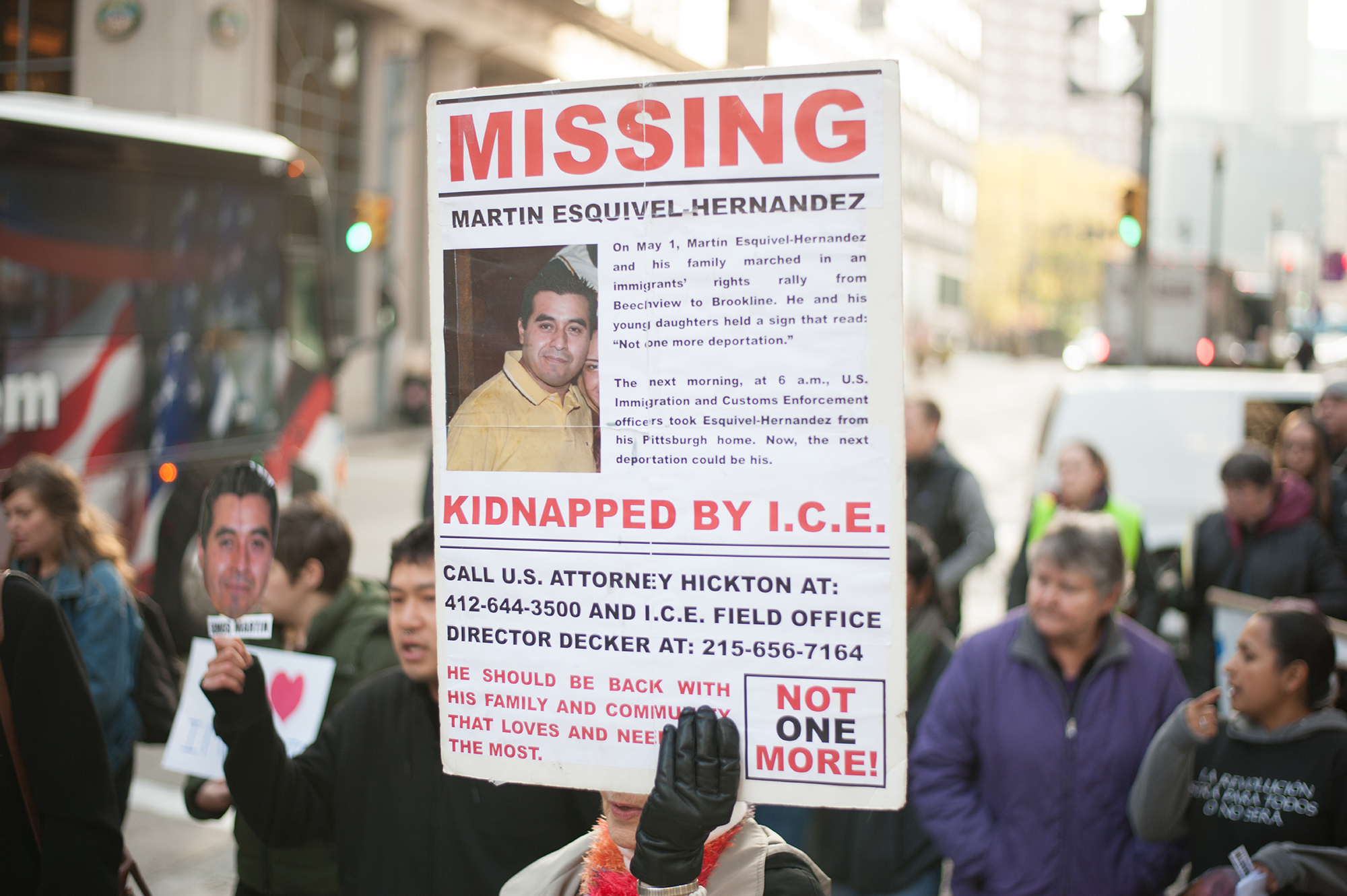 Martin was detained by ICE agents a month after he was cited by police for driving without a license and a day after marching in an anti-deportation rally. (Photo by Sarah Collins/PublicSource) 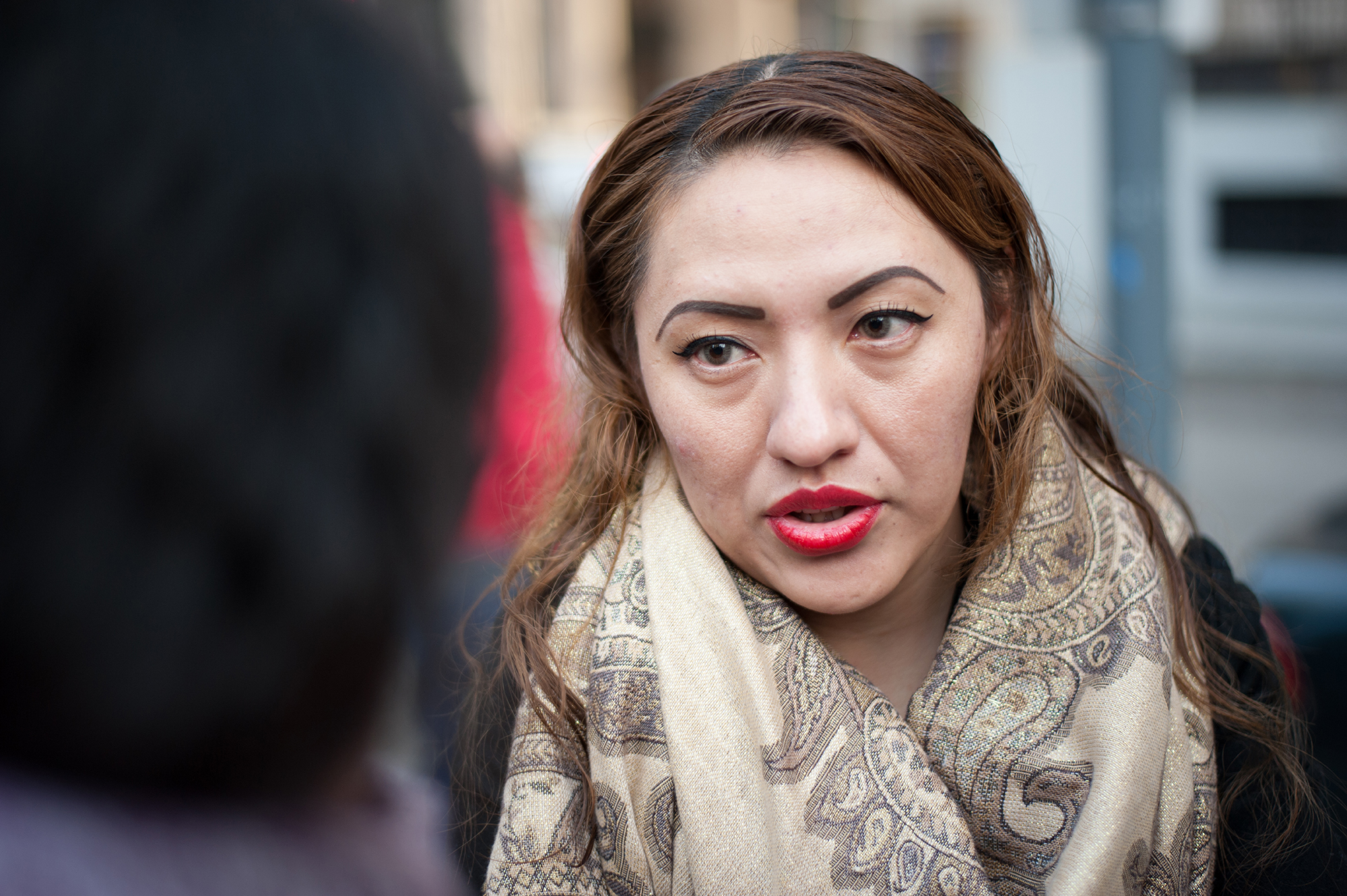 Alma Brigido wants her husband back. Martin Esquivel-Hernandez, who is an undocumented immigrant, is being held at a private prison in Youngstown. He was detained by U.S. Immigration and Customs Enforcement [ICE] agents on May 2. Here, Alma is speaking out about her husband being detained at a protest in downtown Pittsburgh. (Photo by Sarah Collins/PublicSource) 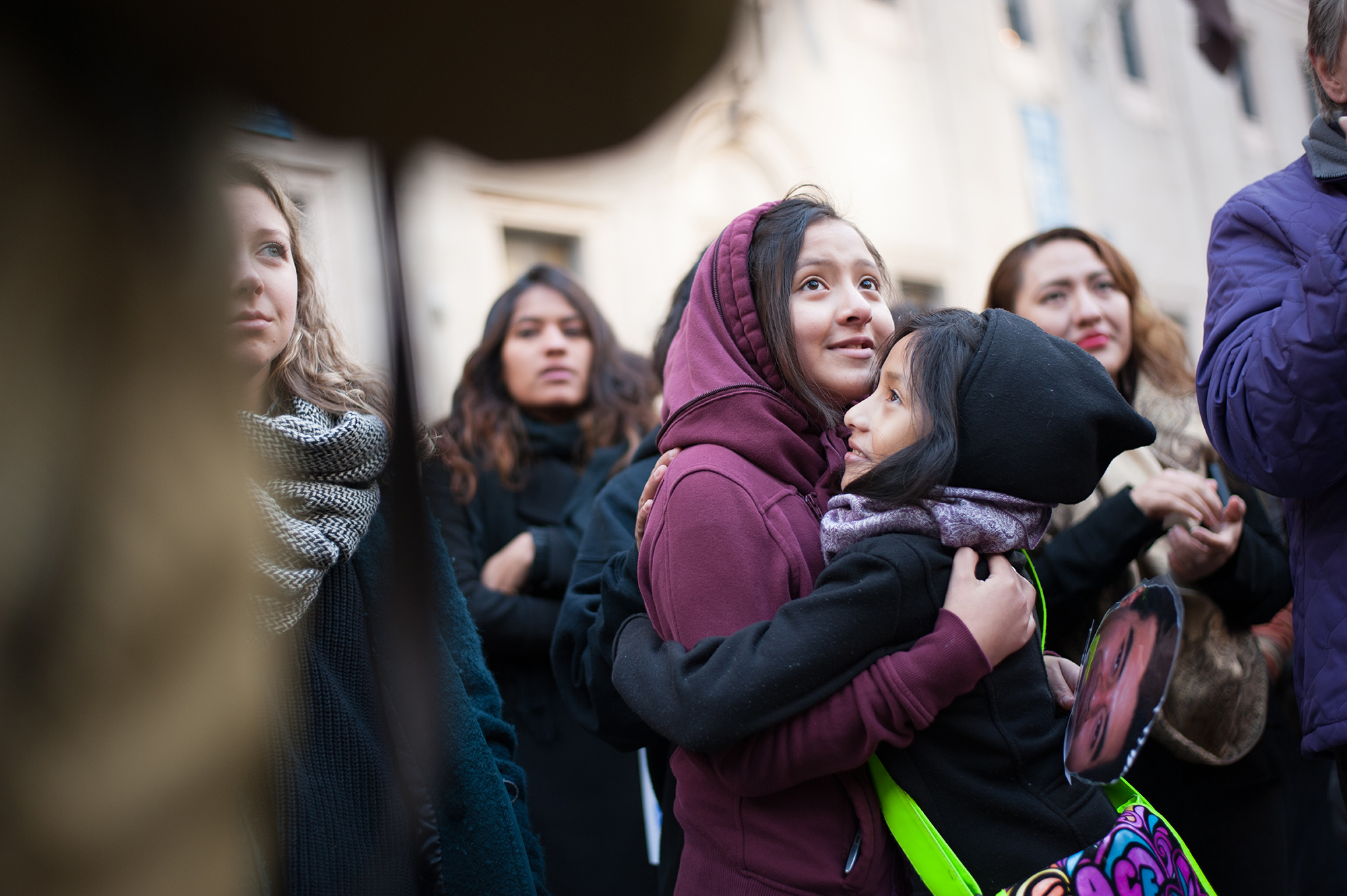 Alma’s daughters, Luz and Shayla Esquivel-Hernandez, also attended the Nov. 15 protest and march calling for the release of their father and broader acceptance of immigrants. (Photo by Sarah Collins/PublicSource) 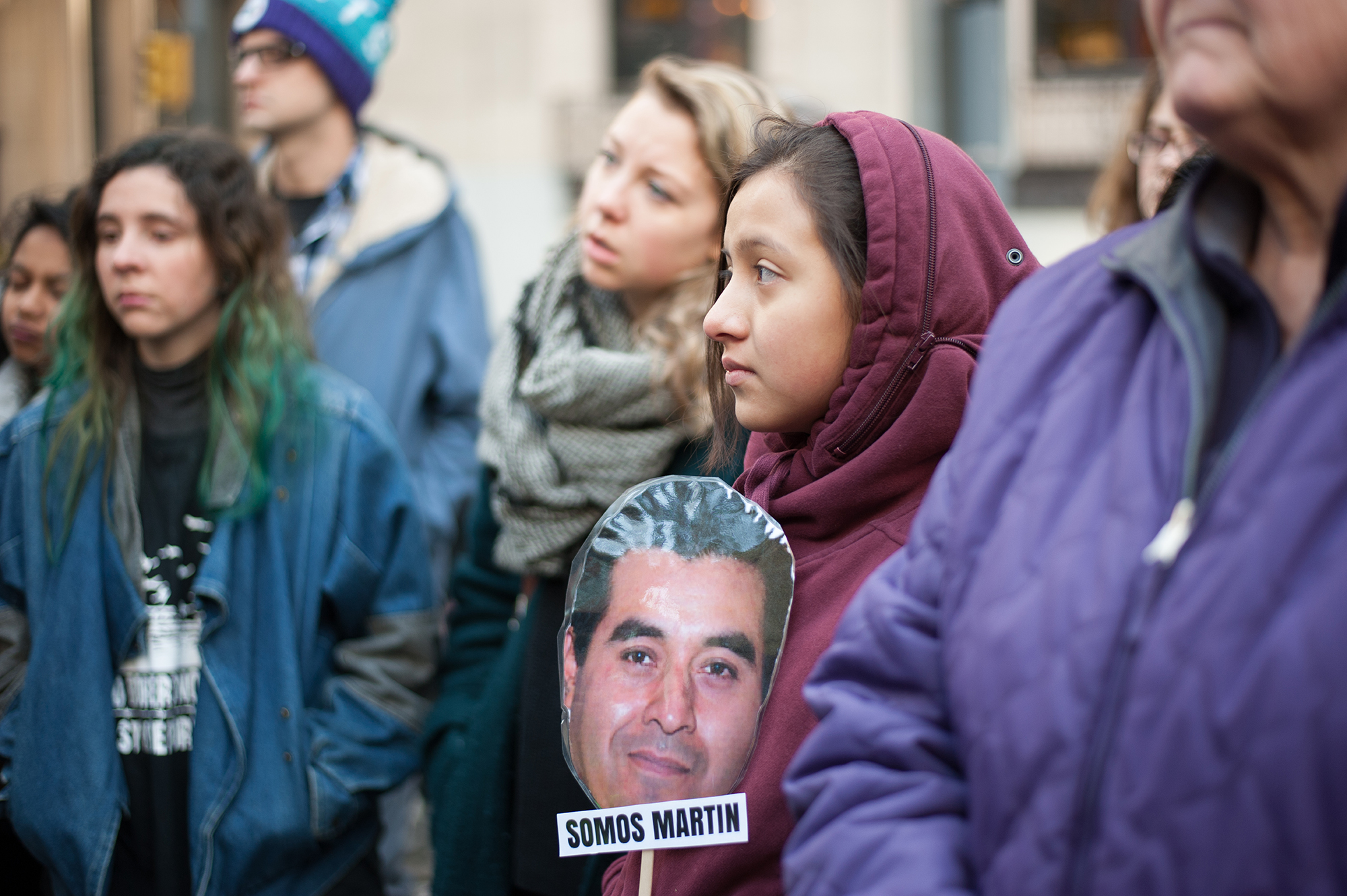 Shayla, 11, described her father as her hero. Luz, 9, said it makes her sad that she cannot hug her father when she visits him at the prison in Youngstown. (Photo by Sarah Collins/PublicSource) 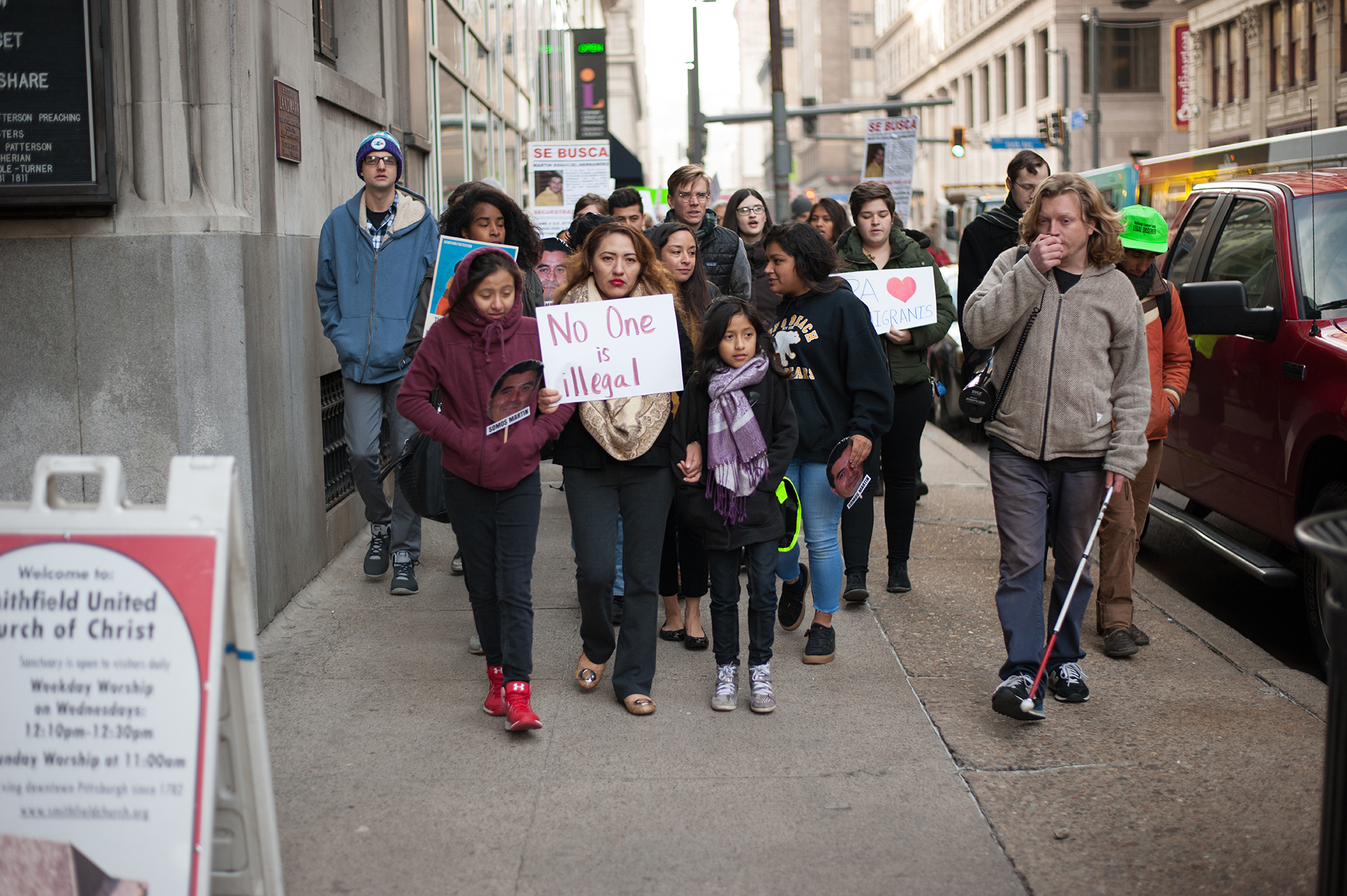 Shayla told people at the Nov. 15 rally for her father that she comes straight home from school each day to babysit her younger siblings while her mother works to support the family during the imprisonment of her father. (Photo by Sarah Collins/PublicSource) 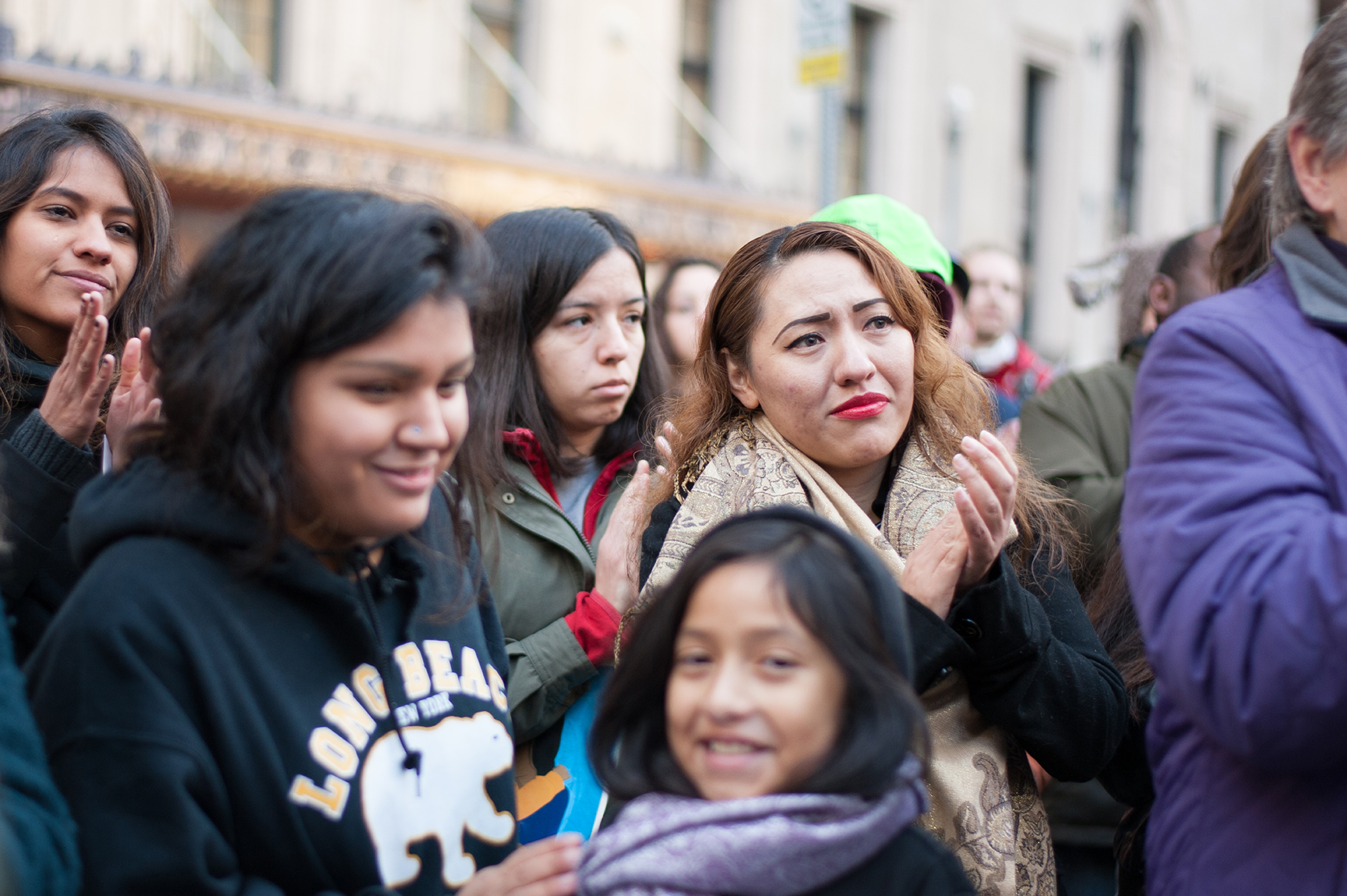 Alma told the crowd her husband worked hard to support his family and was active in organizations trying to improve the lives of Latinos and at his children’s school. (Photo by Sarah Collins/PublicSource)

Maria woke up on Nov. 9 to frantic calls from her Latino friends reacting to the election news.

“There is crying. There is pain and confusion and always asking, ‘Why is this happening?” she said.

“Kids got up that day and heard about Trump being President-elect and they were crying because they were worried that mom and dad would be taken away from them,” said Sister Janice Vanderneck, director of Casa San Jose, a Brookline center that serves the local Latino community.

The community’s concerns prompted Casa San Jose, in conjunction with the Latino Family Center in Hazelwood, to organize two emergency meetings at which an immigration lawyer spoke to families.

The centers arranged free mental health counseling for Latino families and sent a mental health worker on Nov. 15 to Brashear High School, which has the highest percentage of Hispanic students of the city’s high schools — 5 percent of the about 1,300 students.

Pittsburgh Public Schools Superintendent Anthony Hamlet said an automated call was placed Nov. 17 to each family in the district, letting them know school counselors were available to students with fears or frustrations regarding the presidential election.

When Maria crossed the Mexican border, it was with her son, Yusafat, now 15. Her husband crossed separately. The family now also includes son Isaac, 12, and daughter, Nicole, 4, who are both American citizens.

Maria said her family’s story reflects many of the undocumented Mexican immigrants who have rebuilt their lives here.

“A lot of my friends, they’ve bought homes, own cars, they have credit cards,” Maria said.

Now they worry all will be lost if there is a mass deportation.

Maria said she is strong and will fight for her family’s right to stay in the country.

“My friends are weaker. They ask, ‘What are we going to do?’ I say, ‘We are going to continue our lives. Kids will go to school. We will take care of our homes and make the food and put it in the hands of God,’” she said.

The lawyer who met with families last week told them not to be afraid to go out and not to pull their children out of school. But she did advise them to be careful about driving a car and to stay away from situations that may draw the attention of law enforcement.

Undocumented immigrants cannot get a Pennsylvania driver’s license and driving without a license is illegal.

But Maria, who spoke through interpreters at Casa San Jose, said driving is necessary for most immigrants, many of whom support their families by working multiple low-paying jobs in places where public transportation is not available.

“What Americans don’t understand is that a car is not a luxury. It is a necessity,” Maria said.

Horatio Ruiz, who entered the United States 23 years ago as an undocumented immigrant but is now a permanent resident, referred to the region’s Latino population as “people in the shadows” of the workforce.

“They are cleaning your house, making sure the grass is perfect at the golf course and washing the dishes in restaurants,” Ruiz said.

Her husband is in the midst of a legal battle with immigration authorities who are trying to force his return to Mexico. He came to the attention of authorities after he was involved in a traffic accident.

Before the accident, the family was in the process of trying to buy a home. Now all of their extra money is being used to pay an immigration attorney.

Another similar, but higher-profile case, is that of Martin Esquivel-Hernandez, an undocumented immigrant who is in prison in Youngstown, Ohio, awaiting a Dec. 8 hearing in federal court. He was picked up U.S. Immigration and Customs Enforcement agents on May 2, a month after being cited by Mt. Lebanon police for driving without a license and a day after marching in an anti-deportation rally.

Maria said her family is fighting to keep her husband here.

She calls herself “the rock of the house” and said she cannot show any fear or her husband and children will worry.

But if her husband is sent back to Mexico, Maria said she will remain here with her children.

“There is nothing there for us,” she said.