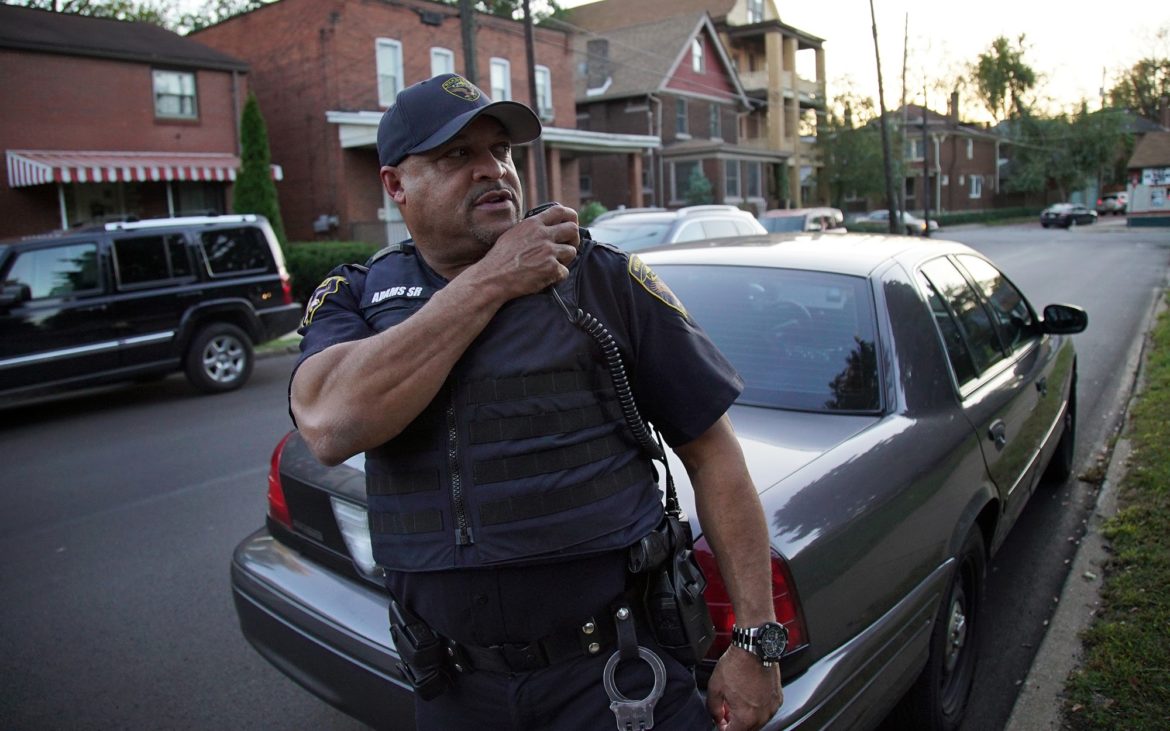 A Little Tikes basketball hoop sits in the corner of the porch on Rebecca Avenue in Wilkinsburg. A witch on a broomstick dangles from the home’s awning, marking the house for trick-or-treaters in advance of Halloween.

A syringe sits by the back tire of a Ford sedan parked at the curb.

Bricks of heroin are stashed inside the car, the white rectangles visible through the windshield. A search warrant will reveal a revolver hidden in the trunk, one of at least 50 guns seized this year that Wilkinsburg police say are illegally carried.

In a borough stigmatized as a place of violence, these weapons are a reminder of how quickly gunfire could break the peace.

“Give somebody a gun who’s afraid,” said Rev. Thomas Mitchell Jr., “and someone that they’re afraid of comes at them, what do you think is going to happen here?” Mitchell, 67, has seen Wilkinsburg go from a thriving borough to a community struggling with blight and disinvestment. He’s hopeful for the future — the borough had only one homicide this year — but he knows that the saturation of guns means some youth feel the need to be armed.

“We could probably walk maybe four to five blocks in any direction and find someone to buy a gun from,” Mitchell said, sitting in a meeting room at Wilkinsburg’s Covenant Church of Pittsburgh, where he is an associate minister.

On a chilly night in January 2002, gunmen killed his son Thomas Mitchell III, not far away in Homewood. Often on Fridays, he would have visited with his son, who had been paralyzed in a shooting years earlier. Instead he stayed home, until his son’s mother contacted him on his pager.

“They just got Tommy,” he recalls her saying.

He figured Tommy had been arrested. His son had a history of dealing drugs.

From his house on the hill, he could see Tommy, 31, being pulled out of Mr. Tommy’s Sandwich Shop and Car Wash, where an 8-year-old girl and her father were also killed. Two men, who had feuded with Tommy in the past, were convicted in the triple murder.

Mitchell has felt the scars of gun violence from both sides. He explains the pain of burying a son, and he tells youth about the consequences still facing his older son Eric, nearly 30 years into a life sentence for a 1988 fatal shooting.

Rev. Janet Hellner-Burris says violence in Wilkinsburg seems to come in waves. In the 1990s, the community was rocked by drive-by shootings and violent crime linked to groups like the Larimer Avenue/Wilkinsburg gang (LAW), later dismantled by a sweeping federal investigation.

She credits the community for joining together to keep gangs from growing stronger. But  violence didn’t disappear. In 2010, the borough’s mayor and Police Chief Ophelia Coleman challenged local pastors to do more to deter violence after a string of murders in the late summer and fall that year. The Sanctuary Project formed as a result.

In 2011, Wilkinsburg experienced two murders. The next year, however, shooters killed a dozen people, according to the Allegheny County Police Department, which investigates the borough’s homicides. Still officials saw the community moving in a positive direction, and then, on a warm March evening last year, gunfire from an assault-style rifle cut through a backyard barbecue on Franklin Avenue, killing five adults and an unborn child.

“It was like a gut punch,” said borough Councilwoman Marita Garrett, who won the May primary election to be the borough's next mayor.

There was Wilkinsburg again, in headlines not just locally but across the world, as the site of brutal violence, and with suspected gunmen who weren’t even from the borough.

Hellner-Burris describes this shooting as a tidal wave, a violent scene beyond anything the community had seen before.

“It’s so important to change this narrative of, ‘Isn’t this terrible, isn’t this awful? Wilkinsburg is a terrible place,’” said Hellner-Burris, Sanctuary Project president and senior minister at the Christian Church in Wilkinsburg.

The Sanctuary Project is organizing a gun buyback on Nov. 18. Residents 21 and older can turn in firearms, no questions asked, at the borough building (605 Ross Ave.). Handguns are worth $50 in gift cards and rifles are worth $25.

Patrolman Mark Wilson points his index finger to the sky. Then he bends it in half.

“How much effort does this take?” he asks, mimicking a trigger pull.

The Wilkinsburg native drives down the borough’s Penn Avenue commercial strip. Growing up here 50 years ago, he hardly saw a vacancy. Now he points out the boarded storefronts, the abandonment and the lack of jobs.

Residents are expected to earn a living in fast food work. Maybe they sell drugs instead.

He talks about deterioration. The disappearance of industrial jobs that built the town, and he talks about a deterioration in families — not just in Wilkinsburg, but across the country — where children aren’t taught consequences for their actions, and where petty arguments escalate to gunfire. In his patrol vehicle, Wilkinsburg police officer Mark Wilson uses a laptop during his shift on Oct. 17, 2017. (Photo by Ryan Loew/PublicSource)

He sees more good people in Wilkinsburg than bad, but if they don’t band together, the negative overshadows them. He doesn’t sound hopeful.

“Shots fired, you get one phone call,” he said, describing how residents respond to gunfire. “It’s like, ‘Oh that’s just somebody shooting.’ What’s wrong with that mentality?”

Violence is indeed down this year. 2016 saw not only a brutal mass shooting but also five additional murders. The fatal shooting of a Penn Hills man this June marked the borough’s only homicide. Seven bricks of heroin, phones and a revolver seized at a drug bust on Rebecca Avenue on Oct. 12, 2017. (Photo courtesy of Wilkinsburg Police Department)

Detective Michael Catanzaro keeps a meticulous log of all the firearms police recover, ranging from aging revolvers to assault-style rifles. There’s even a crossbow in the evidence room.

Seizures of illegally carried guns in Wilkinsburg are at their highest point in the current decade, up from 39 seizures last year.

Many of these are from drug cases, like the revolver stashed in the Ford sedan on Rebecca Avenue. Many of them were stolen, used as currency by drug users to get heroin from dealers. Others are obtained through illegal straw purchases.

In drug cases, Catanzaro said suspects often flip to inform on a supplier. Then a small case grows into a larger bust. But with guns, he said suspects give far less information. That means police seize the individual gun, but they don’t know how to clamp down on the source.

“If we knew that, we could solve it,” Chief Coleman said of the illegal gun problem. “We really don’t know. It’s a hodge-podge.”