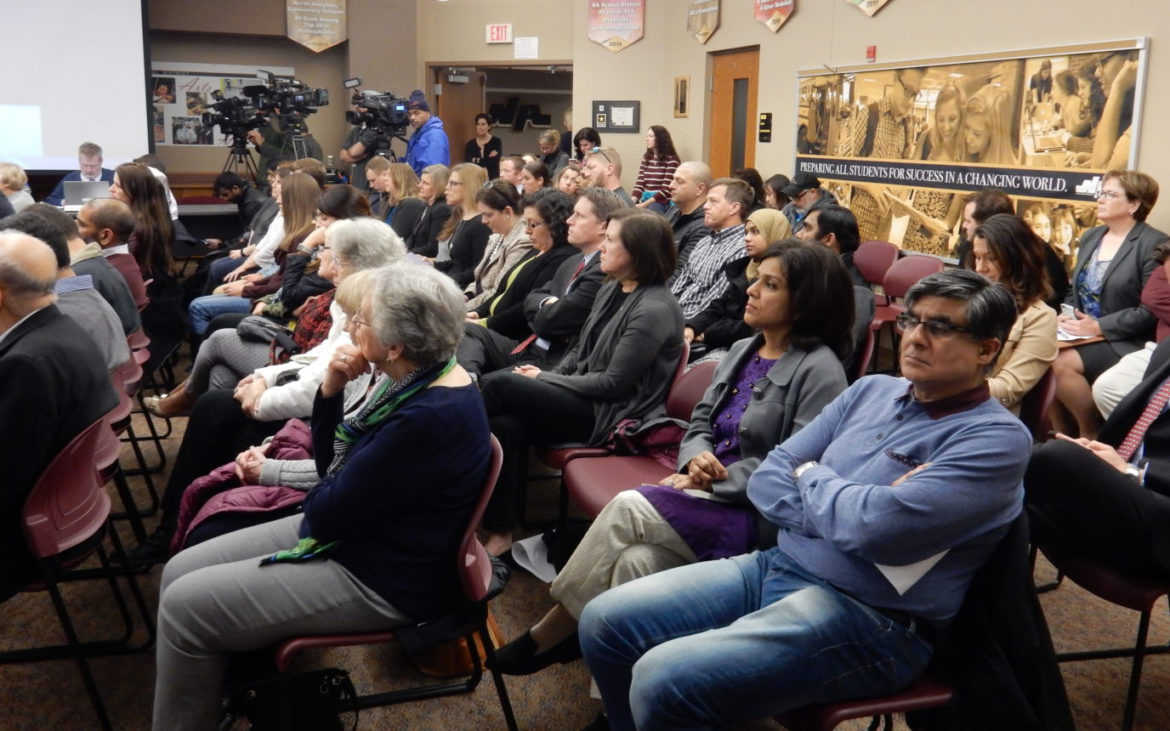 More than 100 people attended the North Allegheny School District board meeting Wednesday night to discuss the district's partnership with a security firm called INPAX. Some parents and residents found social media posts from the INPAX CEO to be offensive and disturbing. (Photo by Juliette Rihl/PublicSource)

Update (4/20/2018): The North Allegheny School District and INPAX jointly released a statement Friday afternoon, announcing that their partnership has been ended. According to the statement: "While the District’s experience with INPAX has been nothing but professional, with highly positive feedback, both parties believe it is in the best interest of the community to mutually end the current relationship. It is our shared hope that the community can begin to build bridges, initiate constructive conversation regarding diversity and inclusion, and continue to focus on providing the necessary skills and training to ensure the safety of our children, schools and community."

Should INPAX, a Pittsburgh-based personal security firm, be the company training staff of the North Allegheny School District to protect students in active-shooter situations if its CEO shares views that some community members find disturbing and offensive?

That was the question raised at the district board member meeting on Wednesday night, where more than 100 people gathered to learn more about INPAX after some parents found discriminatory and alarmist social media posts made by the company’s founder.

Former Marine Sam Rosenberg founded INPAX in 2003. He has been working with the school district since 2014, conducting security awareness training and developing district-wide security protocols.

Along with 15 to 20 people in the crowd, Rosenberg spoke at the board meeting and apologized to anyone who was offended by the posts. He said he was “mortified” when North Allegheny Superintendent Robert J. Scherrer called him about the posts, as they aren’t representative of his beliefs, he said. “The name of my company, INPAX, means ‘in peace.’ Anything that does not promote peace is directly contrary to our mission.”

Some parents and community members have been pressuring the school district to terminate its partnership with INPAX since the social media posts surfaced in early March. Upon further scrutiny by concerned citizens, they learned INPAX would also soon be opening an indoor shooting range and start selling firearms, which some believe violates a district policy.

While school board members did not comment and went directly to executive session after the meeting, one board member said they expect to make a decision about the district’s involvement with INPAX in the near future. 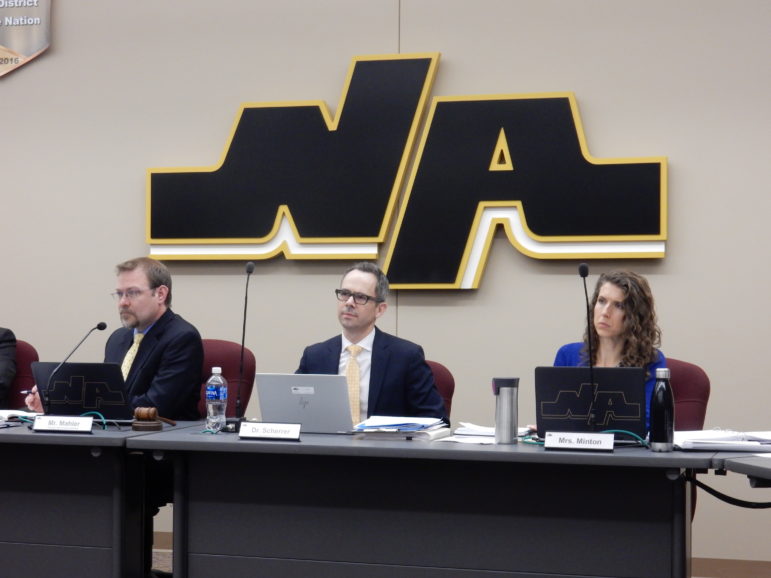 At the April 18 meeting of the North Allegheny School District board: (from left to right) Kevin Mahler, school board president; district Superintendent Robert Scherrer; and school board member Allyson Minton. (Photo by Juliette Rihl/PublicSource)

Ruth Quint, one of the first to speak at Wednesday night’s board meeting, said she did not know the content of INPAX’s trainings, but that Rosenberg’s numerous “Islamophobic, homophobic” Facebook posts “completely disqualify him from training North Allegheny staff.”

On Facebook, Rosenberg shared memes criticizing the bill that allows transgender students to use restrooms that correspond to their gender identities. One post on INPAX’s Facebook page was a map from The Daily Caller (a conservative news and opinion website), which identified the Islamic Center of Pittsburgh as a “radical mosque” with ties to terrorism. And another post on Rosenberg’s personal Facebook page referred to Muslims as “savages.”

Wasiullah Mohamed, executive director of the Islamic Center of Pittsburgh, said rhetoric like Rosenberg’s increases Islamophobia and puts the Muslim community at risk. “INPAX is meant to spread peace and safety, but this rhetoric makes us all less safe,” he said.

McCandless resident Cindy Waeltermann said she thinks people are using the social media posts to vilify INPAX because they are angry about the company’s plans to open an indoor shooting range and self-protection academy in McCandless Crossing this spring. “You have allowed a handful of extremists with an agenda to malign an upstanding community member,” she said.

"This rhetoric makes us all less safe."

Yet several others who stood at the microphone insisted the partnership with INPAX violates district policies, including “respecting human diversity” and “non-discrimination practices,” which apply to both the school and its business partners.

Gretchen Jezerc, resident and parent of a former North Allegheny student, argued that because INPAX sells weapons and will soon sell firearms, it violates the district’s “approved commercial advertising” policy, which prohibits advertisements promoting the sale or use of firearms. “As a parent, resident and marketing professional, I am mortified… we have a district advertising policy for good reason,” she said. INPAX is featured 11 times on the district website, Jezerc said, which she estimated to be hundreds of thousands of dollars in free advertising for the company.

Jaime Martinez, 15, is the board representative for the North Allegheny Intermediate High School. As a Hispanic student and member of the school’s multicultural society, he said the issue struck a chord with him. Martinez countered the argument made by some that the social media posts were being taken out of context. “These comments can’t be made. Period. And there’s no excuse for context.” 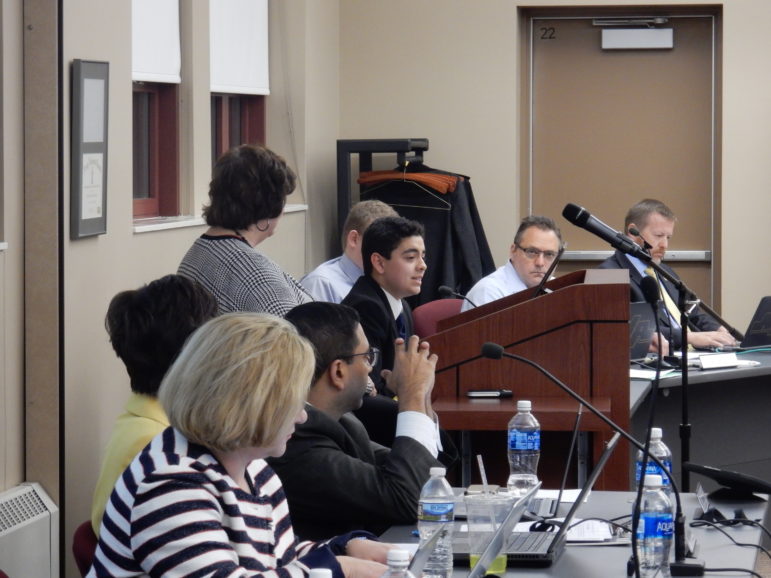 Jaime Martinez, 15, (speaking) is the board representative for the North Allegheny Intermediate High School. (Photo by Juliette Rihl/PublicSource)

Concerns about the company emerged on March 5 after the North Allegheny School District hosted an informational meeting on school safety, during which Rosenberg spoke about the company’s philosophy and trainings. One training, called “Spotting the Wolves,” teaches participants how to recognize indicators that a student could become violent. According to an INPAX brochure, these indicators are “observable and predictable as boiling water, if you know what to look for.”

Some parents researched the company afterward, worried that the philosophies in Rosenberg’s speech were dehumanizing and could target minority students and students with disabilities. Online searches produced the social media accounts for INPAX and Rosenberg.

On March 26, five parents met with four North Allegheny School District board members and the superintendent and requested that the district end its partnership with INPAX by the end of the week. They also asked that an INPAX community training, scheduled for March 28, still take place, so that the 260 parents and guardians who registered could understand the crisis response trainings that teachers and staff have been receiving.

The following day, the training was cancelled due to “unforeseen circumstances.” A follow-up email to parents from the superintendent clarified that the cancellation was because “a District parent shared concerns regarding inappropriate content on social media channels affiliated with INPAX,” which violated district policy. Despite the conflict, INPAX conducted a training for 40 North Allegheny staff members on Tuesday, and Rosenberg said he is working on several projects for the district.

"Anything that does not promote peace is directly contrary to our mission.”

Katie Leslie, one of the North Allegheny parents who was at the meeting with the board members and superintendent, said she submitted a Right-to-Know request to the district on Tuesday asking for more information on INPAX’s trainings. She said she requested dates and payment amounts made to INPAX, dates of trainings provided to staff and names of attendees, and copies of all communications sent to staff about trainings.

Rosenberg said INPAX’s training programs have been implemented in several dozen school districts and universities in the area and in hundreds of companies.

Several residents who know Rosenberg personally emphasized his good character and the positive impacts INPAX has had on the community. “The reason he started his business is because he cares very deeply that the people in our community need to be protected… He wants everyone to be safe. Everyone,” said Noah Dowd, a friend of Rosenberg, at the Wednesday meeting. Others stressed that Rosenberg simply made a mistake, and that he should be given a second chance.

Ryan Repinski, father of two North Allegheny students, agreed that Rosenberg made a mistake, but said it doesn’t justify continuing the relationship. “It doesn’t matter if that person is a good person. It doesn’t matter if they made a mistake. The district has policies, and they should be applied fairly,” he said. “That’s the consequences of his actions... He should not represent North Allegheny anymore.”

Ishfaq Ahmad, a father of two children in the district, is a representative of the Council on American-Islamic Relations [CAIR]. He appreciated Rosenberg’s apology, but said, “The damage [of] INPAX’s training to North Allegheny staff may already have been done.” He offered to provide staff sensitivity training through CAIR.

After the meeting, Rosenberg said he hopes to continue working with North Allegheny. “If the district chooses to keep us, we’ll probably continue to serve,” he said. “It’s been pretty painful, but it’s a lesson that we’ve learned. And if they don’t decide to keep us, I understand.”

Juliette Rihl is a freelance writer and Coro Fellow. She can be reached at JulietteRihl@gmail.com.