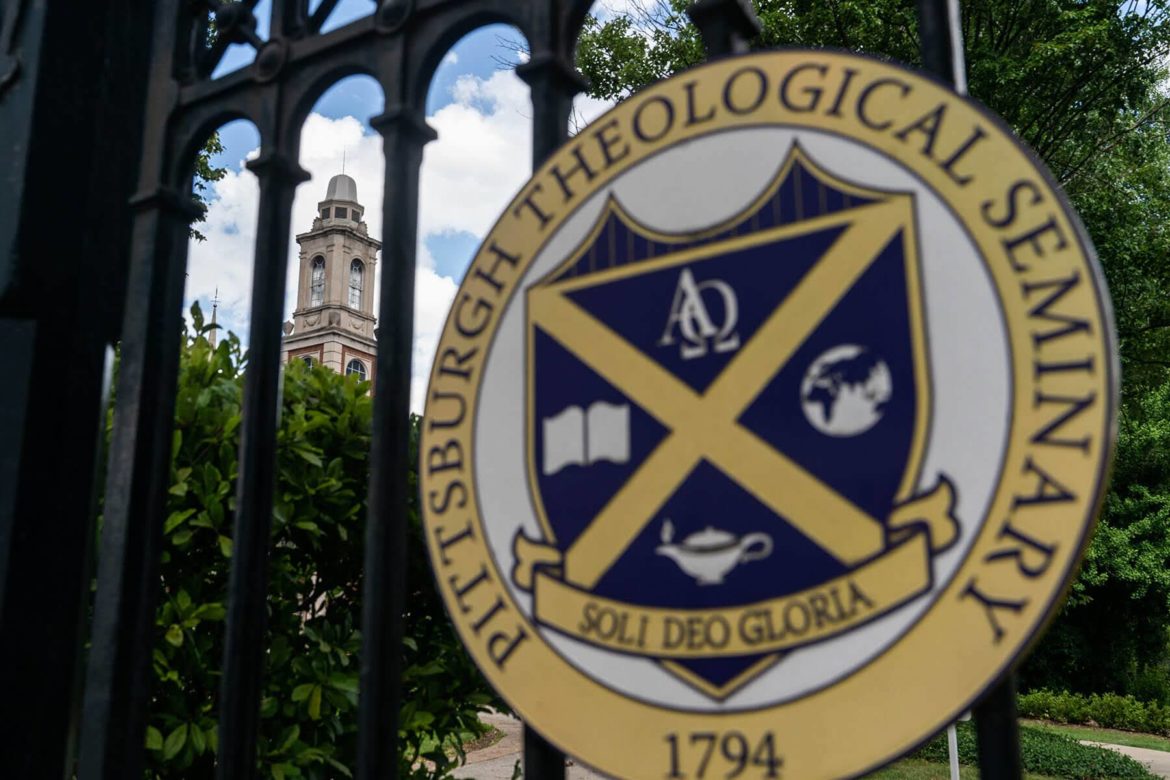 “Soli Deo Gloria” (“To God alone be the glory”) reads the emblem on the gates of Pittsburgh Theological Seminary. Like at many seminaries, the leaders at PTS are confronting how best to prepare their students to pastor congregations rife with political conflicts. (Photo by Chris Jones/100 Days in Appalachia)

This article was co-published with 100 Days in Appalachia, a nonprofit, collaborative newsroom telling the complex stories of the region that deserve to be heard. Sign up for their weekly newsletter here.

In the part of Appalachia near Pittsburgh, new pastors could have widely different experiences. They might be called to churches in the inner city or rural towns. They might serve 200-year-old legacy churches or start-up congregations. Their congregations may be active in the Black Lives Matter movement or participate in anti-abortion protests. Pastoring in and around Pittsburgh isn’t one size fits all.

Now picture this: You’re on the faculty at a local Christian seminary. What do you teach up-and-coming pastors about the relationship between faith and politics? How should they handle conflicts over abortion or same-sex marriage or, in recent months, mask-wearing and vaccination?

Your students could hear QAnon theories in their pews or be invited to join pastors who have organized armed Christian militias, or who arrived at the Capitol on Jan. 6 trying to reclaim the government for Christianity.

Related: Political conflicts escalate in the sanctuaries of Southwestern PA churches. Can they heal?

Should students bring politics into the pulpit or seek to stay nonpartisan?

To gauge answers to these questions, PublicSource and 100 Days in Appalachia spoke with faculty members from two Pittsburgh seminaries, Pittsburgh Theological Seminary [PTS] and the Reformed Presbyterian Theological Seminary [RPTS]. PTS is affiliated with the theologically progressive Presbyterian Church (U.S.A.). RPTS is governed by the theologically conservative Reformed Presbyterian Church of North America. The students at each identify with a range of religious denominations. 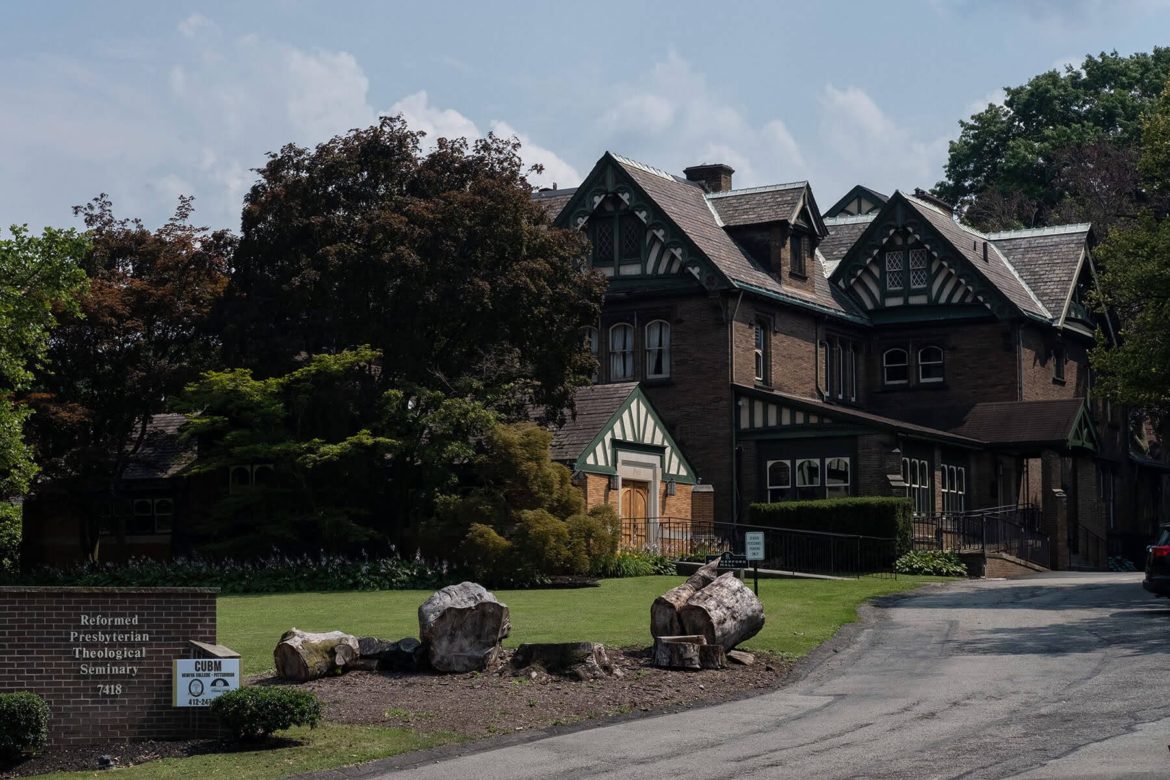 The Reformed Presbyterian Theological Seminary is housed in Rutherford Hall, a historic mansion on the east side of Pittsburgh. (Photo by Chris Jones/100 Days in Appalachia)

Administrators at both seminaries recognize political polarization in the Church as a pressing concern. Both seek to prepare students for it, emphasizing humility, careful listening and relationality. They teach that pastors can’t effectively serve congregations they don’t genuinely understand.

Yet their curricula also differ in ways that reflect their own theological and political divides. Sometimes their philosophies or priorities conflict.

When it comes to preparing students for political fractures in their future congregations, here is one key strategy that distinguishes each seminary from the other.

“There’s nothing new under the sun,” said Rev. Barry York, president of RPTS and professor of pastoral theology and homiletics, or preaching. “There’s always some battle the church is facing with respect to the culture.”

For York, that’s why history and tradition belong at the center of theological education. 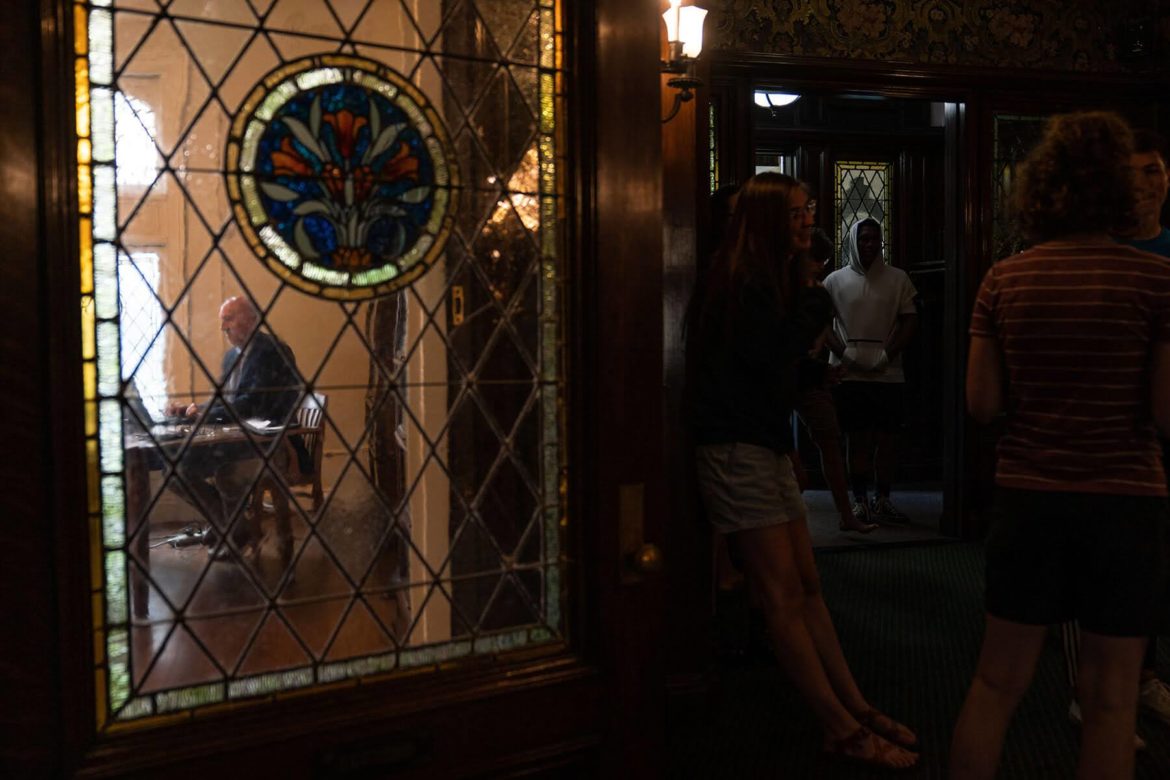 Rev. Barry York, president of RPTS, encourages students to model their responses to political controversy after examples in the Bible. The stained glass on his office door reflects the historic style of the campus. (Photo by Chris Jones/100 Days in Appalachia)

Students can read New Testament texts like the Book of Acts and glean lessons on how to mediate political conflicts in their congregations. They can turn to Scripture to derive their views on issues like same-sex marriage and transgender rights.

Should debates break out within students’ congregations then, they can resolve them by guiding people back to the Scriptures — or, more specifically, the Scriptures interpreted “as they were intended,” said Rev. Keith Evans, professor of biblical counseling.

“God’s word becomes the unifying place of conversation,” he said. According to Evans, the Bible’s view on “moral issues” like sexuality is clear. Read “rightly,” the Scriptures yield only one possible interpretation. 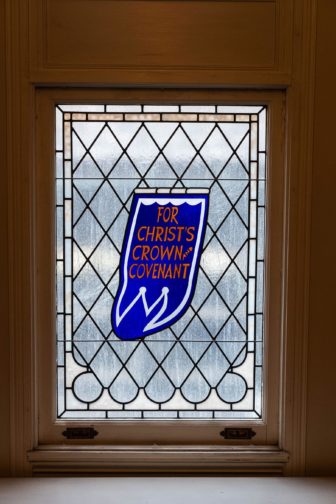 “Rightly” is the keyword. According to York, one of the biggest challenges facing American culture today is individualism, or a sense that ‘I define my own reality.’

If that temptation spills into religion, people will interpret the Bible to mean whatever they want it to mean, rather than by an external standard, said Rev. Jeff Stivason, professor of New Testament studies. “Sola scriptura doesn't mean, ‘If I think it, it must be biblical,’ right?”

That’s why theological tradition is important at RPTS. Reformed Presbyterians follow the understanding of God and Scripture detailed in the Westminster Confession of 1647. They also emphasize the “mediatorial kingship of Christ,” a doctrine that states Jesus is “King and Lord over all the governments of the world — whether they recognize Him as king or not,” Evans said.

As Evans sees it, some seminaries struggle to stay true to their confessional statements. Instead of seeing pastoral ministry as an “ancient discipline,” they “chase after the particular issues of the day” and “accommodate” the culture’s questions or interests.

To avoid that risk, RPTS keeps the core of its curriculum constant, even as its applications or expressions change. “It’s been rather unchanged for the 200 years of our existence as a seminary,” Evans said.

“In the Christian tradition, we talk a lot about resurrection,” said Rev. Denise Thorpe, director of PTS’ Doctor of Ministry program. When it comes to the life of the Church, though, Thorpe said she thinks people are often more interested in restoration than resurrection. Resurrection involves death as a precursor to new life. It is painful. It requires letting something go.

For many Christians, that’s uncomfortable, Thorpe said. They don’t want to confront death or loss as a necessary precondition of their institutions’ growth or vitality. But, as Thorpe sees it, it’s a risk churches — and seminaries — need to take. 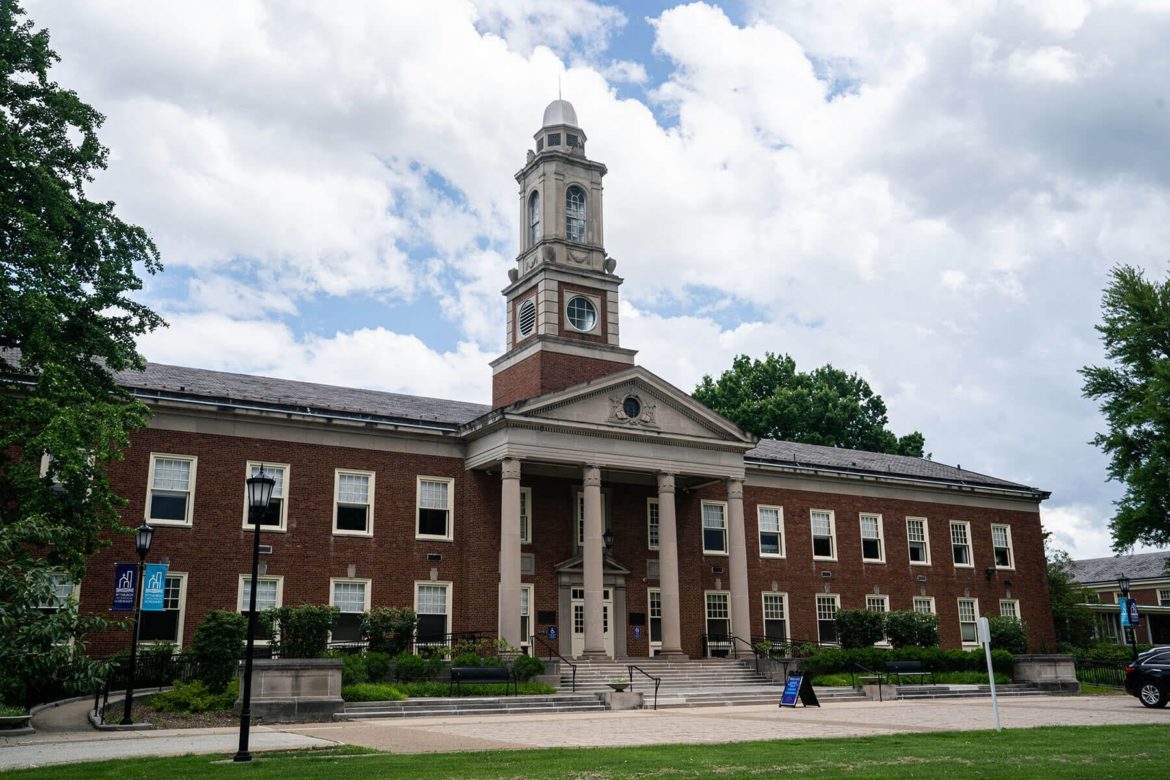 “God is very much out at work; the Spirit is moving,” she said. The task for Christians is to listen and “join in.”

In the past few years, one of PTS’ primary movements — or responses to perceived movements of the Spirit —  has been an institution-wide reckoning with race.

“You actually have to be actively working against racism,” said Rev. Leanna K. Fuller, associate professor of pastoral care. “If you don't have it explicitly stated as something you're going to teach, then it's very easy for people just not to teach it, for people to stay in their dominant cultural frameworks.”

In fall 2018, PTS launched a substantially revised curriculum that included required courses on contextual analysis and intercultural missions. Since then, they have also implemented an anti-racist training program for students and faculty and a new anti-racist student learning outcome. 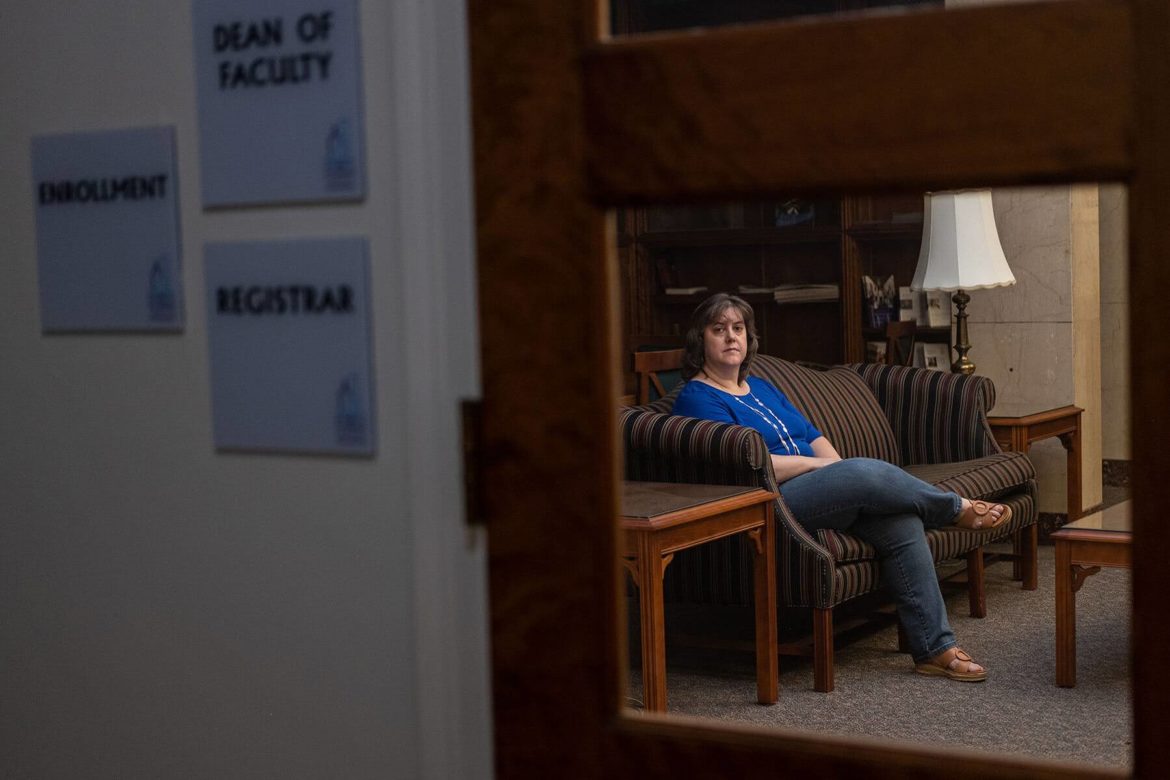 Rev. R. Drew Smith, professor of urban ministry and director of the Metro-Urban Institute of the PTS, stresses the importance of these changes taking place at the institutional level.

Chris Jones contributed to this story. He is a Report for America corps member covering domestic extremism for 100 Days in Appalachia. Click here to help support his investigative reporting through the Ground Truth Project.