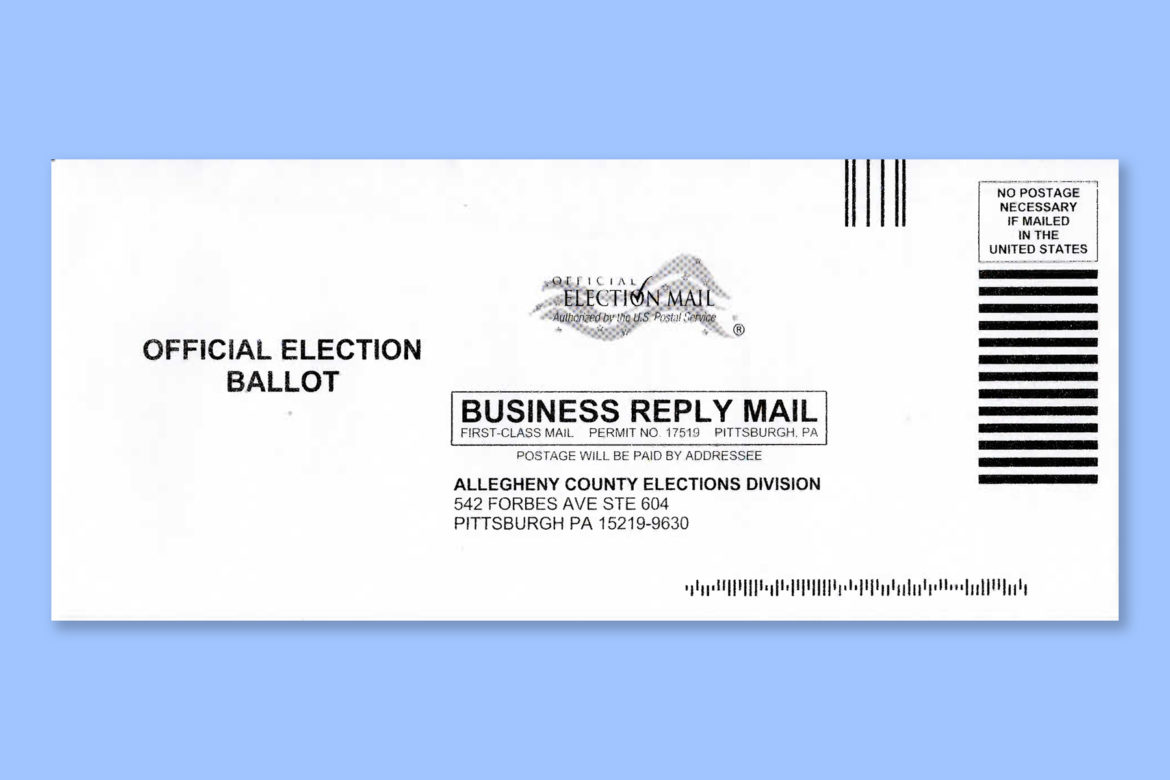 In recent days, some Allegheny County voters have experienced a perplexing problem: their completed mail-in ballots have been returned back to their homes by the postal service instead of being delivered to the county elections division.

One voter, Jane Downing, said she dropped off her ballot in a public mailbox in East Liberty last week. Several days later, it was delivered back to her. “I thought, ‘This isn’t right. There’s something wrong with this,’” she said.

According to Downing, she went to the East Liberty post office to inquire about the matter and was told that several other voters had brought up the same issue. “It was clear that mine wasn’t the only one,” she said.

PublicSource spoke to one post office supervisor and two postal carriers who confirmed the issue. According to them, at least several dozen pieces of election mail have been mislabeled and rerouted back to the sender. “It’s definitely happening all over Pittsburgh,” the supervisor said.

The three postal workers who confirmed the issue— who asked to remain anonymous to avoid consequences at work — said they believe the issue stems from voters’ return addresses being both printed and handwritten on the back of the election envelopes. According to them, because of the placement and prominence of the return address on the back of the envelope, the mail sorter machine picks up the return address and misinterprets it to be the delivery address. “You cannot have a system where you have the person’s address with the barcode on it, because it’s a machine,” said the supervisor. “Once it reads the address, it comes right back to them.” 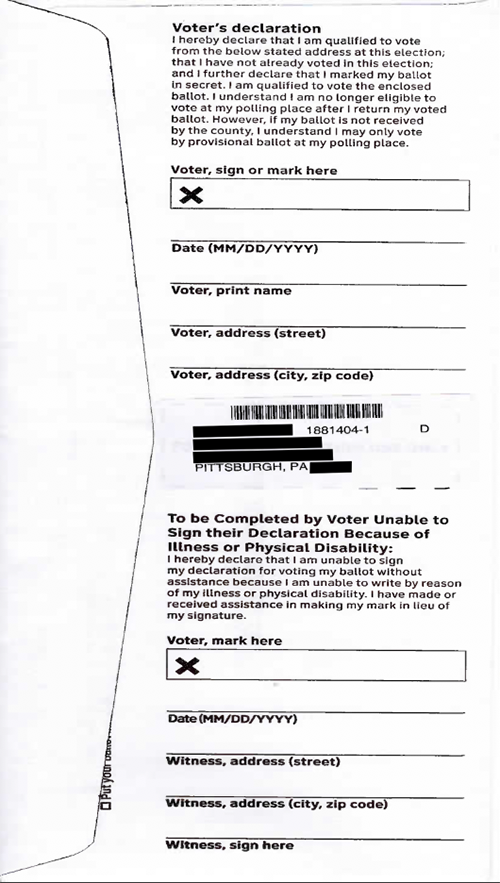 The back of the Allegheny County mail-in ballot envelope includes a sticker with the voter's address, as well as a place for the voter to handwrite their address. PublicSource has redacted the voter's name and address on this envelope. (Courtesy)

It’s likely that most of the misprocessed ballots never make it back to the voters because, the mail carriers said, they can often intercept. After reading the address, the mail sorting machines stamp the mail with an associated barcode for sorting. The two mail carriers that PublicSource spoke to said when they receive a mismarked piece of mail, they cross out the erroneous barcode and send it back to the mail sorter without delivering it back to the sender. “You resend it on its way, and 99 out of 100 times, that solves the issue,” one carrier said.

One carrier, who has worked for the post office for more than two decades, said he occasionally sees the problem occur with other pieces of pre-printed mail but has never seen it occur at this scale. According to him, one day last week was particularly bad. “I probably got 15 or 20 of them back that day,” he said, though he noted he hasn’t received any mismarked envelopes since.

The supervisor said he reported the problem over a month ago. “I told my boss, you better go down there to the plant” where the mail sorters are, he said. While the problem may only be occurring with a small percentage of election mail, the supervisor believes the issue to be important. “A few of the votes, somebody could lose the election. ’Cause a few votes count in some states,” he said.

Have you experienced a problem with your mail-in ballot? Tell us about it. Email juliette@publicsource.org

According to United States Postal Service [USPS] spokesperson Jill Walters, the agency is looking into the issue. “At this time, we have no information to suggest any ballots were not properly handled and provided to local election officials, per our established process,” she wrote in an email to PublicSource on Saturday evening. When asked several follow-up questions regarding the USPS workers’ statements on Monday, she declined to provide further comment and said USPS’s earlier response still stands.

Allegheny County spokesperson Amie Downs told PublicSource that two voters have reported the problem to the county. Voters whose ballots have been returned to them should either drop their ballot off at the county elections division offices or put their ballot in a separate envelope and send it to the elections division, Downs said. Voters can also vote a provisional ballot in-person at their polling place.

The county has contacted the post office to meet after the election and address any issues that occur, Downs said. Because only two voters have reported the issue, Downs said, the county is not planning on notifying voters of the problem.

The issue of returned ballots reported by a few voters has become known just days before the June 2 primary election, which will mark the first time Pennsylvania has allowed no-excuse mail-in voting.

Due to the pandemic, the county’s election division has been working overtime to prepare for the election and meet the newfound vote-by-mail demand. More than 260,000 voters applied for mail-in ballots. As of Saturday, May 30, the county had received 170,000 completed ballots.

Ballots must be returned to the county elections division by 8 p.m. Tuesday, June 2.

Maryn Formley, executive chair and founder of the Pittsburgh-based nonprofit organization Voter Empowerment Education and Enrichment Movement, was not aware of the issue of some mail-in ballots bouncing back to voters before being contacted by PublicSource. She found it worrisome.

“This is definitely distressing news,” she said. She praised the county’s overall efforts in mobilizing for the election and mail-in voting amid the pandemic, but expressed concerns about the potential that many more ballots may not be handled correctly.

Ron Bandes, president of the nonprofit organization Vote Allegheny, was not aware of the issue before being contacted by PublicSource either and found it baffling.

“That is exceedingly strange,” he said. While he doesn’t believe the problem is widespread, he brought up what he believes is a larger issue: voters not yet receiving their mail-in ballots.

“I’ve heard many, many stories of people not receiving their ballots,” he said. “And honestly, that’s something that’s happened in past years as well. So I’m not even sure that can be blamed on the tenfold increase in mail-in voting this time.”

As for the returned ballots, one mail carrier said he hopes the problem will be resolved for future elections. “I hope that they fix it for November,” he said.

Downing agreed. “It could be that this only affects .0001% of the ballots,” she said, “but any ballot that’s missed is a problem.”

How to drop off your mail-in ballot in Allegheny County

Voters may drop off their ballot at the elections division offices in the county office building at 542 Forbes Ave. on the 6th floor between 8:30 a.m. and 5 p.m. on Monday, June 1, or in the lobby of the County Office Building during the following times:

To vote in person, check your polling location here. Mail-in ballots may not be dropped off at polling places.

Wondering about the status of your ballot? Track it here.