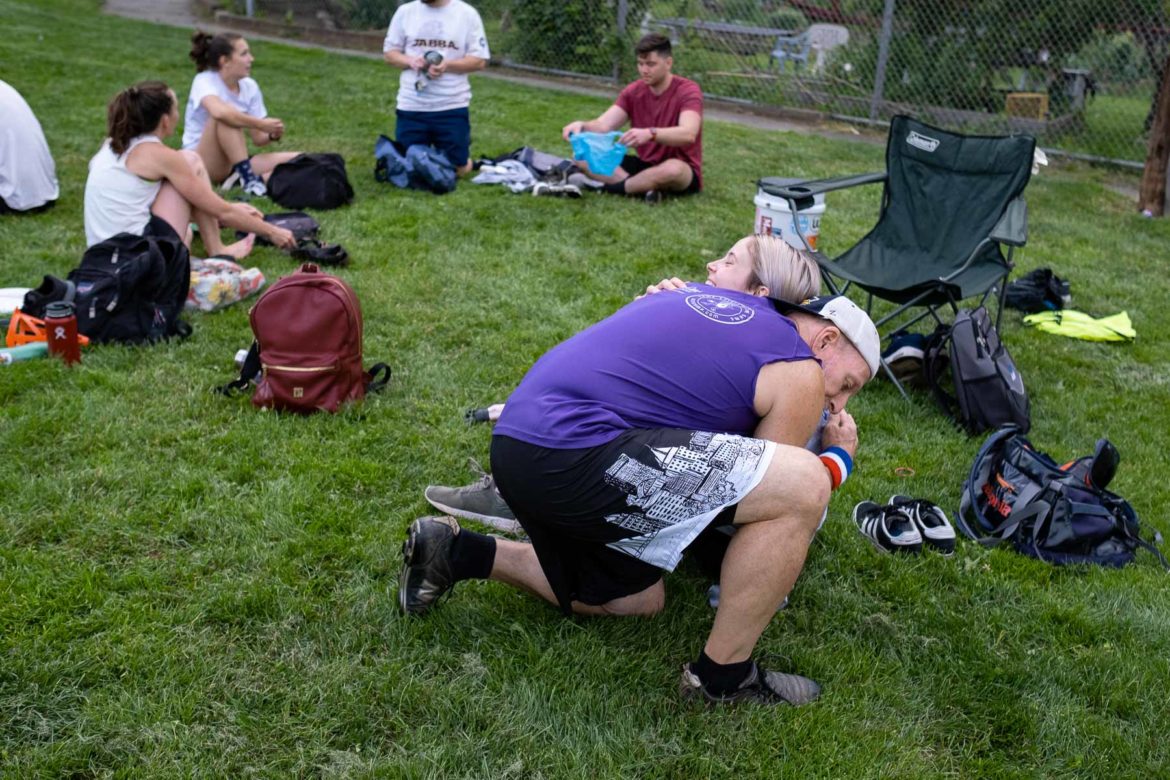 Matt Weiss eagerly approached a soccer field for a pick-up game of ultimate Frisbee after getting vaccinated, his first game since before the pandemic. The Squirrel Hill resident’s excitement was too much for his skin to handle.

“I definitely got some sunburn. I kind of forgot about that...” Weiss said of the May mask-free game in Nine Mile Run. “Because it had been awhile since I was out like that.”

The game started with hugging friends he’d been apart from for more than a year. He likened it to reconnecting with family.

“It’s not just a recreational sport that people play,” said Weiss, 54. “It’s got a kind of distinctive culture to it and a really close community.”

The last “normal thing” Weiss said he remembers before the pandemic was a game at the Schenley Oval Sportsplex. Since that first game, Weiss has returned to league games with the group Pittsburgh Ultimate.

“It was like the end of a drought,” Weiss said of playing again. “You drink until you’re almost sick.”

Fully vaccinated residents, who represent about half of the Allegheny County population, are reevaluating how they navigate the world outside their homes. For many, it means enjoying favorite hobbies like they had before the shutdown, while others are maintaining much of their pandemic-era vigilance out of concern for themselves or vulnerable loved ones.

In mid-May, the Centers for Disease Control and Prevention [CDC] updated its guidance to allow for fully vaccinated individuals to forgo masks in most scenarios. Pennsylvania is planning to lift its mask mandate by June 28. This moves the country close to a return to normal but not close enough that everyone is letting their guard down. 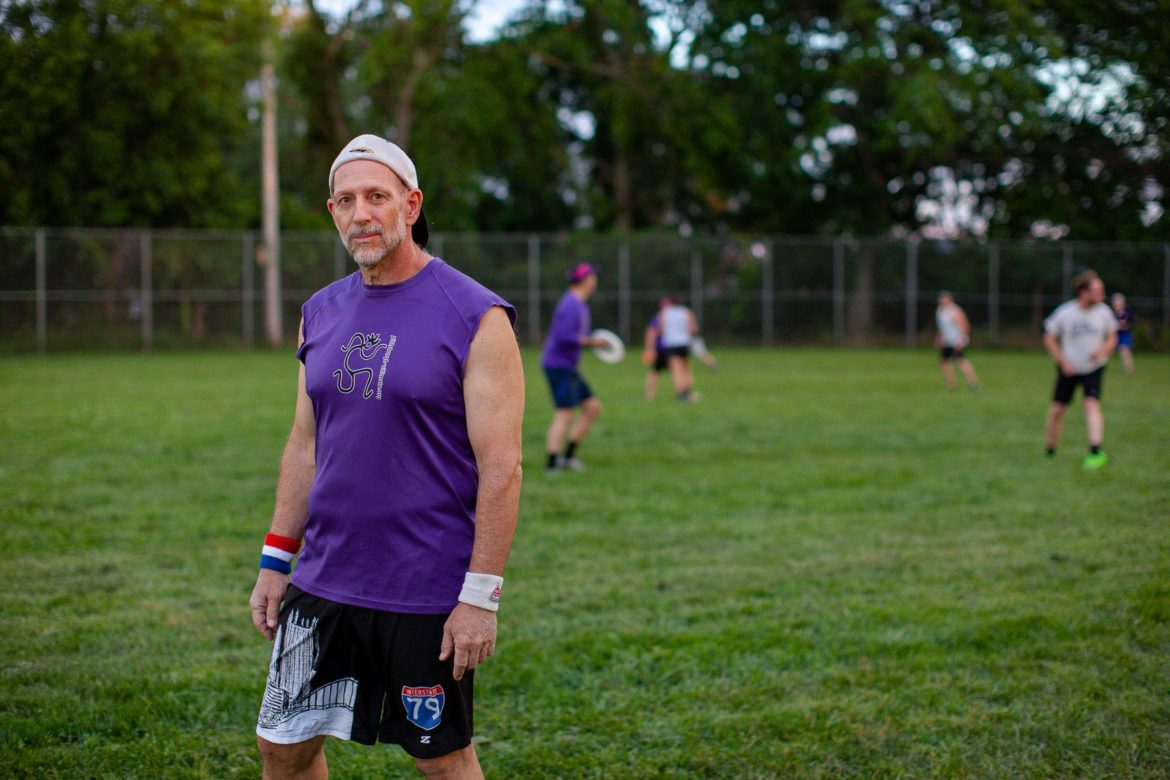 Matt Weiss photographed on the sideline during his first summer league ultimate Frisbee game since receiving his vaccine. (Photo by Quinn Glabicki/PublicSource)

Weiss has taken off his mask when grocery shopping at Giant Eagle, where masks are no longer required for fully vaccinated customers. And he felt safe playing ultimate Frisbee without his mask and trusted that everyone playing told the truth about being fully vaccinated.

“These games are played without referees,” Weiss said. “Players officiate their own games, and you’re expected to be honest. When an ultimate player tells me that he’s vaccinated, then I believe him.”

However, he figures the next time he goes to the movie theater, he may bring a mask along. He typically goes to the movies in the winter, when people are more likely to have colds or the flu.

“You hear all that honking and horking and sneezing and sniffling and coughing, and I think to myself, ‘You know what? This isn’t a bad place to wear a surgical mask,’” Weiss said.

Dr. John Goldman, an infectious disease specialist for UPMC in Harrisburg, emphasizes that the vaccines are effective. He explained that when the CDC issued its most recent mask guidance on May 13, U.S. statistics from a month earlier showed about 6,000 breakthrough cases among 66 million fully vaccinated individuals. Of those, about 300 or 400 had been hospitalized and fewer than had 80 died.

Yet interacting with others unmasked still comes with some level of risk, largely because some people either refuse to get vaccinated or haven’t yet had a shot. Goldman himself, for example, still wears a mask when he goes to the grocery store.

“I think the vaccine allows us to get back to normal life, safely. Again, you have to do a little common sense,” Goldman said. “If you’re younger and healthier, you can do things like go to a concert with less risk. If you’re older and you have medical problems, you should still probably be careful putting yourself in a high-risk situation.”

However, it can be more complex than just a personal decision. Someone young and healthy may live or frequently interact with someone in a high-risk group.

“We kind of like to think this is an on-off switch. Masks, no masks,” Goldman said. “But it’s really a gradation of risk.”

Sean Guzek, a 31-year-old who resides in Uptown, lives with someone who is immunocompromised and has parents in their 90s, so throughout the pandemic, he took strict precautions to make sure he didn’t get them sick with COVID-19.

“We kind of like to think this is an on-off switch. Masks, no masks. But it’s really a gradation of risk.”

“Now that I’m vaccinated, all of those things are so deeply ingrained that I get severely anxious when I don’t do them,” Guzek said.

Guzek has visited other fully vaccinated family members without masks and went out to a restaurant for the first time after getting fully vaccinated. However, he hasn’t been leaving his house much more than he was before and still wears a mask on essential trips, like to the grocery store.

“I’m mildly uncomfortable wearing a mask, and there are so many benefits to it,” Guzek said. “I don’t see the point in not.”

He foresees a day when he won’t wear a mask anymore, but he imagines he’ll stop well after most people. He describes himself as an extrovert and does miss socializing and being out and about as much as he did before the pandemic.

“The pandemic has been really tough because face-to-face interactions [were] the last thing you wanted, especially when we didn’t know anything about what was going on last year,” Guzek said. “My mood has been pretty bad and my just general energy level because that’s kind of how I operate at peak efficiency, is going out and seeing people.”

Now that 31-year-old Forest Hills resident Falencia Jean-Francois is fully vaccinated, she has been seeing her violin instructor in person again. Throughout the pandemic, her instructor Susanna Sonnenberg switched entirely to virtual lessons but now allows fully vaccinated students to again visit her home in Edgewood, unmasked.

Being back with Sonnenberg proved a little awkward at first. Jean-Francois teaches third graders at Braddock Elementary School, so she’s used to being around others, but the only unmasked social interaction she had during the pandemic was with her wife. 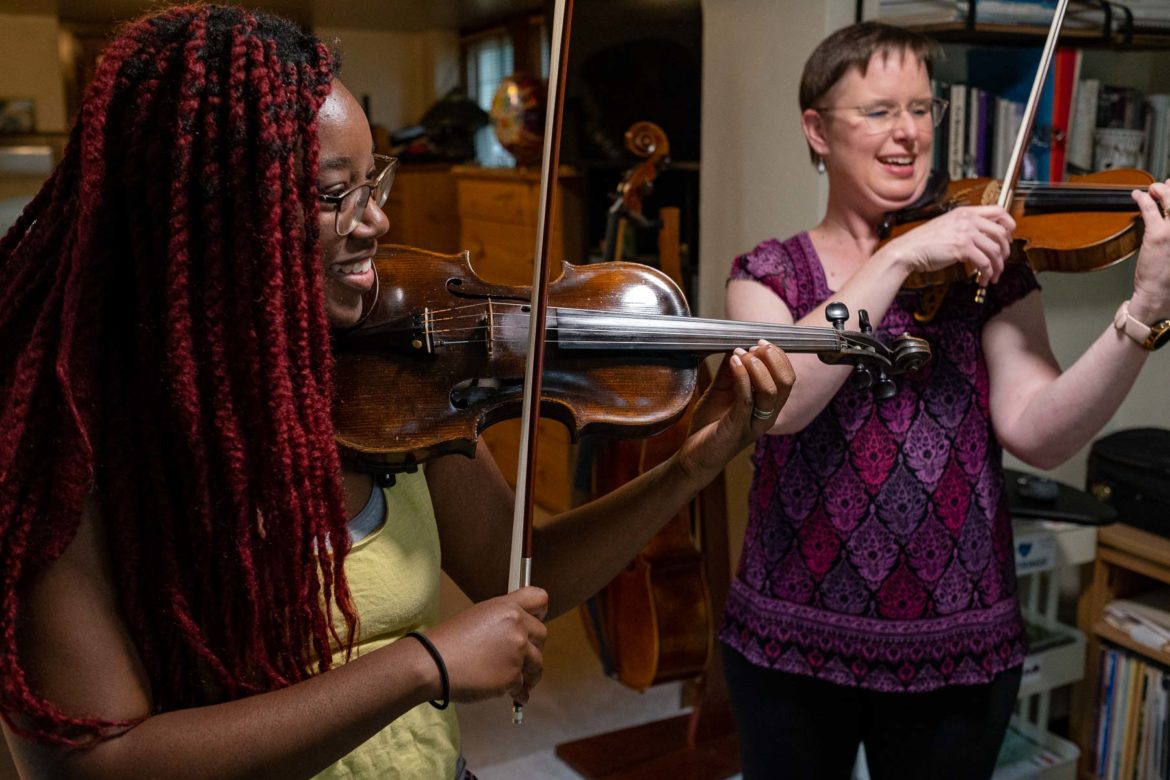 Falencia Jean-Francois practices her violin during a lesson with instructor Susanna Sonnenberg in Edgewood on June 19. (Photo by Quinn Glabicki/PublicSource)

“Being in a social situation, I almost didn’t know what to do at first,” she said. “But it was really easy to kind of slide back into our old routine.”

Some of Sonnenberg’s students have realized that, regardless of any health concerns, it’s just more convenient to attend their music lessons virtually. Jean-Francois considered that but ultimately decided she wanted to get back to in-person lessons.

“Susanna and I play together when we’re in person,” Jean-Francois said. “And so, when I’m playing, I’m also listening to her play, and I can quickly correct my mistakes because I can hear what it’s supposed to sound like. It’s not really possible to do that online because of the lag in sound.”

Jean-Francois understands why mask-wearing and social distancing has been so crucial throughout the pandemic, but taking off her mask and playing with Sonnenberg feels to her like the sort of normalcy Americans have missed for more than a year.

“I teach all day, and so teaching in a mask and talking in a mask, it’s just, it’s kind of suffocating,” she said. “So, being out, I felt like I could actually breathe.”

At the beginning of the pandemic, Squirrel Hill resident Marta Wilkin and her husband were cautious. Wilkin only left her home to go on walks, a makeshift replacement for the exercise she’d do at the Jewish Community Center of Pittsburgh [JCC]. She bought weights for her home and also participated in virtual workouts provided by the JCC.

“We didn’t go anywhere,” Wilkin said. “I’m 70, my husband’s 78, and one of our daughters lives just five or six minutes from us, so she insisted on going to the grocery for us.” 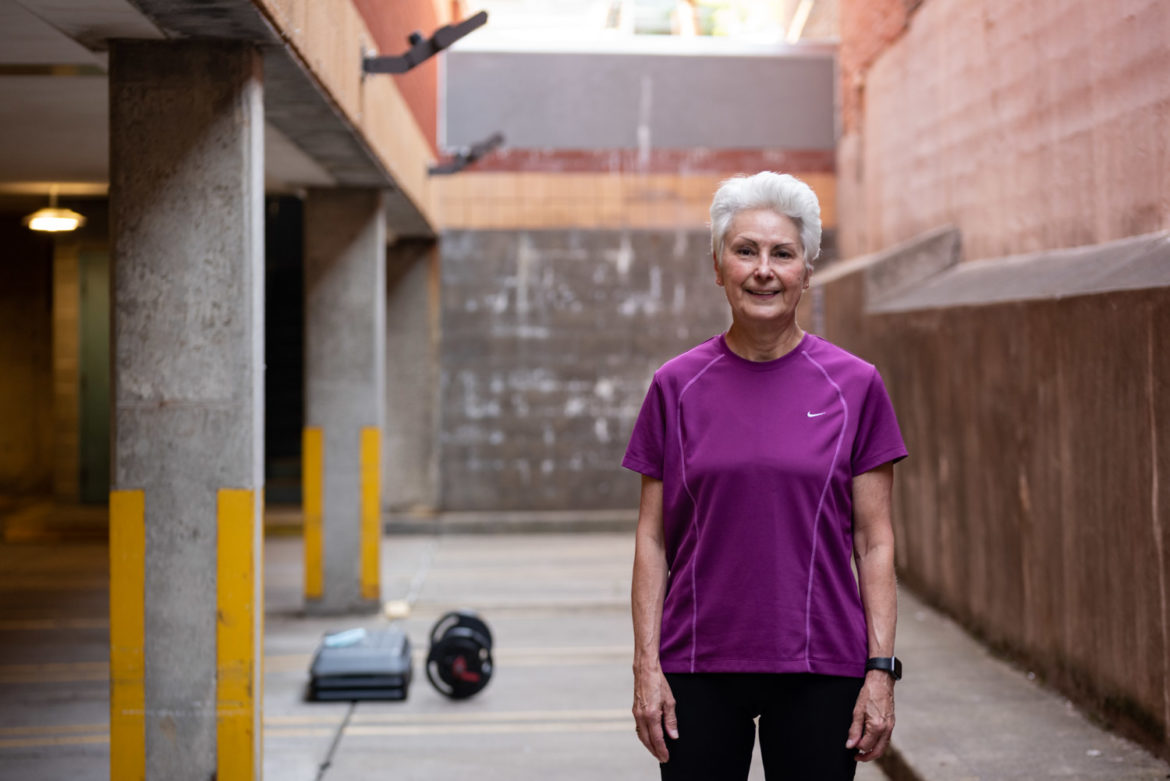 Marta Wilkin poses for a portrait at the Jewish Community Center in Squirrel Hill on June 17. Wilkin is a regular at the JCC, and her recent vaccination has made her more comfortable returning to in-person, close-quarters fitness classes. (Photo by Lindsay Dill/PublicSource)

Eventually, Wilkin started to do her own grocery trips, but she went in and out quickly. She was happy to go back to the JCC last summer for outdoor exercise.

Now fully vaccinated, Wilkin feels more comfortable out and about, regularly going to the JCC and getting back to volunteering for the Pittsburgh Cultural Trust, starting with the Three Rivers Arts  Festival, which ran for ten days in June. She doesn’t wear a mask on her walks anymore, but she still wears a mask at businesses regardless of their policies.

“I just feel more comfortable,” Wilkin said. “I just feel like a lot of people who have not been vaccinated are probably not wearing masks either.”

For Mother’s Day, Wilkin gathered with her family indoors at a restaurant, a first for her since the pandemic. It felt strange at first but also exciting. The outing also marked Wilkin’s 70th birthday, which got her thinking about how much the pandemic has intruded upon her remaining years. While the pandemic may impact children’s development, she imagines most will look back on the pandemic in 50 years as one small, distant memory.

This story was fact-checked by William Sekula.