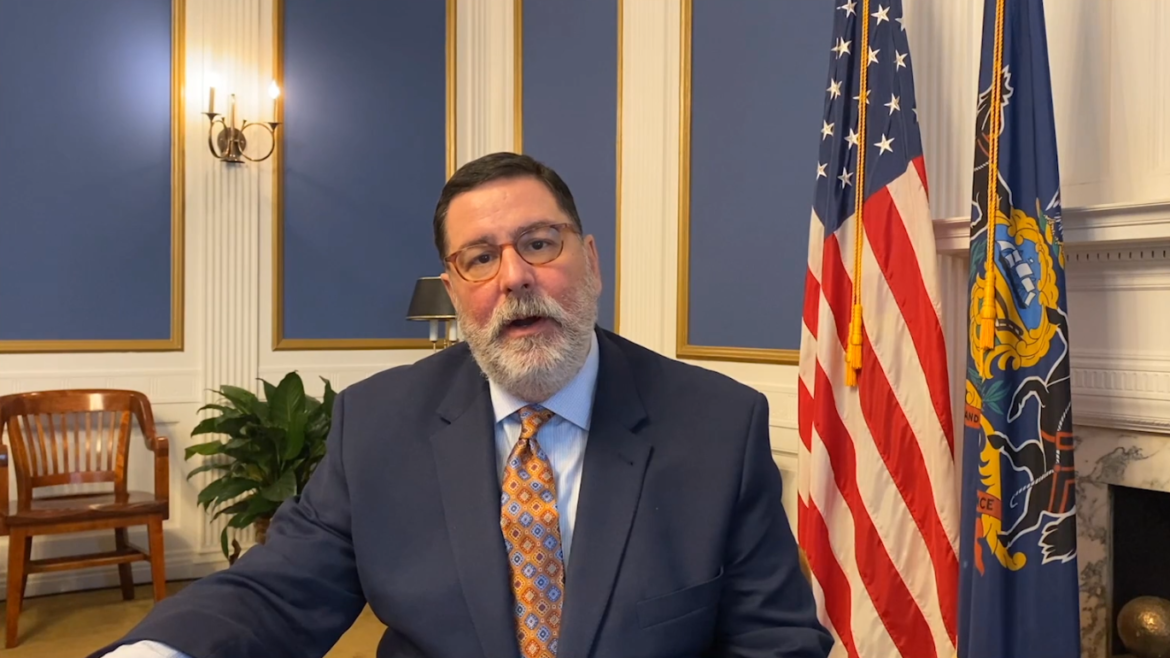 Pittsburgh Mayor Bill Peduto said during remarks on July 30 that the Pittsburgh region must not repeat “mistakes we made in the past” in contributing to the fossil fuel industry. (Screenshot)

The Pittsburgh-area economy has slowly become less reliant on heavy industry since the steel collapse of the 1980s, but environmental advocates said Thursday that Southwestern Pennsylvania is at a “fulcrum point” in deciding what its future economy will look like.

“Addressing which future narrative the region will proceed along is really a planet-level impactful decision, and it’s why we’re going all in in trying to transition to a greener economy,” said Matt Mehalik, the executive director of the Breathe Project*, a local environmental group.

Mehalik and Grant Ervin, the City of Pittsburgh’s chief resilience officer, spoke about building a new green economy at a Thursday afternoon event held by the Institute for Energy Economics & Financial Analysis, a think tank that advocates for accelerating the transition to renewable energy. Steve Carbó, the head of progressive policy consulting firm Carbó Strategic Consulting, moderated the event.

To help the transition into a cleaner economy, Ervin said it is important that communities realize the power of the financial assets they hold. Pittsburgh’s pension board formed a three-person committee in February to study fossil fuel divestment, after Mayor Bill Peduto requested last year that the board “develop and execute” a divestment strategy.

Ervin added that this financial power — exercised through the pension board, but also through routine procurement decisions — can be used to help reinvest in local communities by creating jobs or building new renewable energy plants. The same goes for financial choices made by private companies, he said.

“These are things that we have control over, in terms of how we can use them to invest in Main Street instead of Wall Street,” Ervin said. “From a self-sufficiency standpoint, start with the assets that we control and then start to grow from there.”

Ervin also said cities implementing new policies to make buildings and transportation more efficient, to convert to renewable energy sources and to use shared utility systems can help attract investors and fuel both a green future and related jobs. The city released its latest version of a climate action plan in May 2018, which helps guide decisions around sustainability.

“These are kind of areas that you see really high-growth opportunity, I think, from an investment standpoint, because we’re starting to create the architecture underneath it,” Ervin said.

Mehalik said community reinvestment is critical to help move the region forward, but its reach must truly include all of the region’s different communities.

“We need to communicate that we are an inclusive movement that extends beyond just the urban core in the city of Pittsburgh, but all through the river valleys and the rural parts of the Ohio River Valley,” Mehalik said. “There’s economic opportunity for all of us, working together in an inclusive vision.”

He added that it is also important to reach out to community members to help them understand the regional economy’s true condition. Mehalik noted that the previously lucrative nature of the natural gas industry has now drastically changed, in the span of only a decade.

“Stop misleading people who work in those industries with the nature of the economic model that undergirds it,” Mehalik said. “Get away from the notion that these are sustainable jobs and family-sustaining jobs in the first place.”

Peduto urged during the event’s opening remarks that the region not repeat “mistakes we made in the past” in contributing to the fossil fuel industry.

“Our economic future is based upon renewable energy and creating the efficient models that are necessary in order to be able to run a city and to be able to rebuild a region,” Peduto said. “As a city government, we try to lead by example.”

Peduto spoke out last October against building a petrochemical hub in the region, leading to a rift between the mayor, the business community and Allegheny County Executive Rich Fitzgerald, a close ally. A Shell ethane cracker plant is currently under construction in nearby Beaver County, though Peduto would not talk specifically about the project, saying that it is outside of Pittsburgh’s borders.

“We want to be able to use the laboratory of democracy, our city government, as that opportunity to show our corporate, our institution and our foundation partners that there is a way for Pittsburgh to lead once again,” Peduto said Thursday.

Jon Moss is an intern at PublicSource. He can be reached at jon@publicsource.org.