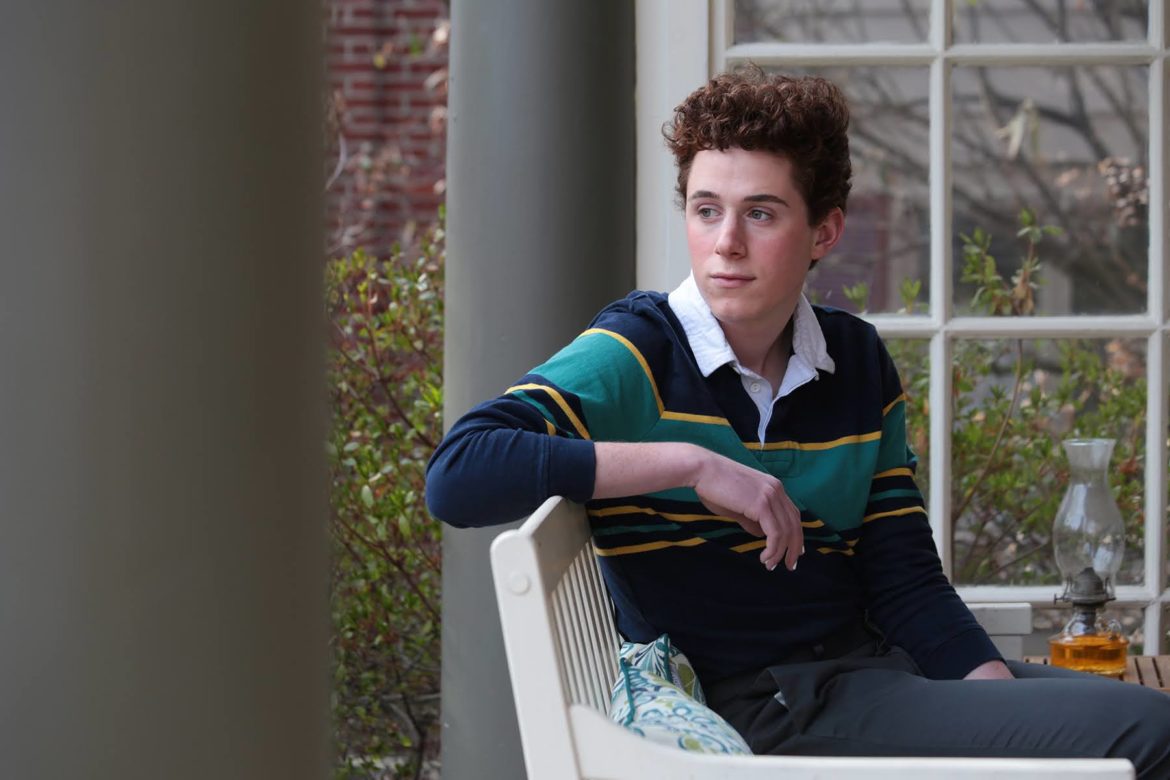 Luke Chinman, 17, photographed outside his home in Squirrel Hill. He is a senior at Taylor Allderdice High School. (Photo by Ryan Loew/PublicSource)

Social isolation changed the way we communicate. When my family and I began to quarantine last March, shifting my junior year at Taylor Allderdice High School online, suddenly every single social interaction I had was intentional.

Every exchange was with someone I knew very well—I wasn’t striking up a conversation with a classmate in the minutes before my physics class would start or running into an old friend inside the Rite Aid down the street from my house. I was only keeping in touch with those closest to me, and, like most people, I wasn’t making an effort to reach out to the people I kind of knew.

But that distinction, at the time, felt like a drop in the bucket of societal changes brought by the worsening spread of a deadly virus. As the days of quarantine dragged into weeks and then months, it manifested itself in different ways: Some people cut their own bangs, tried their hand at home hair dye, shaved slits in their eyebrows. If every social interaction was only with your closest friends, what did it matter if you had made some impulsive decision about your physical appearance?

Many have spoken to the feeling of immobility that they’ve experienced over the past year—days run together, and this month of March seems the same as the last. But I’ve seen it as one of the most transformational years of my life.

Through the absence of interaction, I’ve been given the opportunity to understand my own sense of self without the societal pressures to conform.

I first took to social media to fill the void of human contact, refreshing Instagram only to see the same at-home photoshoot pictures, refreshing Twitter only to see the same slew of frightening articles, then switching to TikTok where the endless feed of videos could pass hours at a time. And with every hour I killed on the app, I could sense the algorithm of TikTok adjusting, picking up on my love for Taylor Swift, my newfound fascination with skincare and, most notably, my sexual identity.

Years after coming out as gay and even finding acceptance within my community, I was discovering a new sense of community online, being able to identify with the thousands of other queer users whose videos came across my screen. 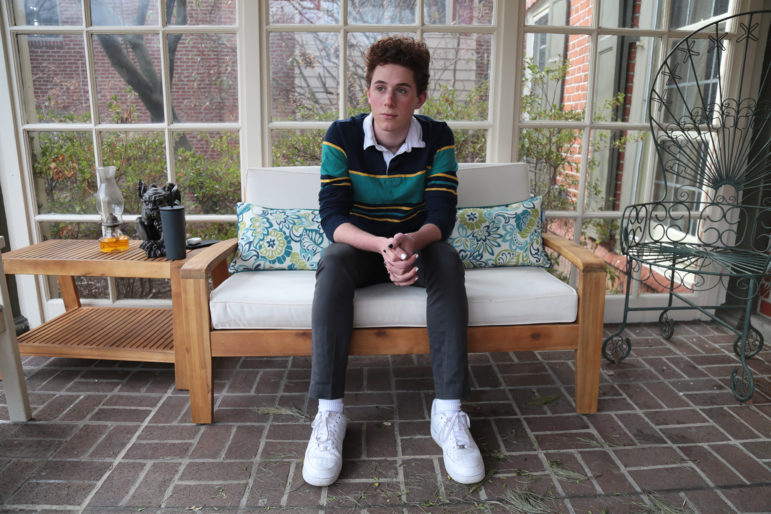 Luke Chinman, 17, found a silver lining in the isolation — an opportunity to explore identity. (Photo by Ryan Loew/PublicSource)

As someone who had often felt alone in my experience, who had tried to understand the meaning of gender and sexuality through Google searches instead of human connection, simply hearing someone say, “I know exactly how you feel” was a comfort amid our virus-ridden reality. I was slowly eased into a community of strangers, where I began to actually consider what it meant to be a queer person in a heteronormative society.

But with this came a new desire to explore expression, specifically relating to my gender. I felt a new freedom as it was the very places I was no longer going—my high school, restaurants, stores—where I felt the most limited by my gender expression, and the one place I was spending all my time—my house—where I was comfortably out of the closet and free to experiment.

In the past, I had toed the line of societal expectation regarding masculine gender expression, but even deciding to buy shorts with an inch shorter inseam felt like a big step.

I’ve been given the opportunity to understand my own sense of self without the societal pressures to conform.

Now I wanted to paint my nails, what I saw as a bold, colorful assertion of my queerness in a way that was hard to hide in public. When our classes started meeting virtually, I quickly learned to hide my nails from my computer camera, orienting my fingers to hide the black pigment I had put on them. I would turn red from embarrassment if I noticed that I flashed my nails to the class. When I did take the occasional trip to the grocery store, I was acutely aware of every person I interacted with, thankful for a mask that could largely shield my identity from anyone who might take issue with the blaring declaration on my hands.

Then, I started wearing makeup. I began with sheer creams, slowly building the confidence to apply a heavier foundation and blush—but I would still use cosmetic products sparingly enough to not be visible over a grainy computer camera in class meetings. It felt like another daring step, one I was only comfortable doing without the pressures of seeing my peers in person. There was a sense of safety through the virtual barrier that the pandemic created.

But at a point—maybe it was as I saw the mass destruction at our nation’s Capitol or the United States surpassing the recorded 500,000 deaths from the coronavirus—it all seemed so silly to me. It was just color, after all. And for all that it represented, I had to come to peace with the fact that I might stand out in a crowd, that in certain instances I may be putting myself at risk, but that it was one thing missing on my road to self-acceptance. I now leave my house wishing I could take off my mask, proudly showing off the color of my nails or the makeup on my face.

But my story isn’t a universal reality. Thousands of queer kids rely on spaces and peers outside of their houses—school clubs, councilors, community organizations—as a support system and are now quarantined with family members who do not support their gender or sexual identity. The Trevor Project, a crisis intervention organization for queer youth, reported nearly twice as many young people reaching out for support over the past year, showing the pandemic’s toll on a group that already faces higher risk for depression, anxiety and suicide attempts. I am extremely lucky to feel safe to express myself in my home and to have had the ability to experiment throughout this prolonged period of isolation. It is not a luxury that every queer person is afforded.

As schools begin to open, as we start to see each other in person, I want to reaffirm what has always been true: Personal expression and gender identity are not the same. Queer people notice every microaggression, every constraining narrative about gender presentation, every furrowed brow in the grocery store. It’s on straight, cisgender people to create an inclusive society, one that doesn’t dictate what cosmetic products a person can use based on their gender. Because it shouldn’t take a global health crisis for a person to feel comfortable in their own skin.

Luke Chinman is a senior at Taylor Allderdice High School. If you want to send a message to Luke, email firstperson@publicsource.org.