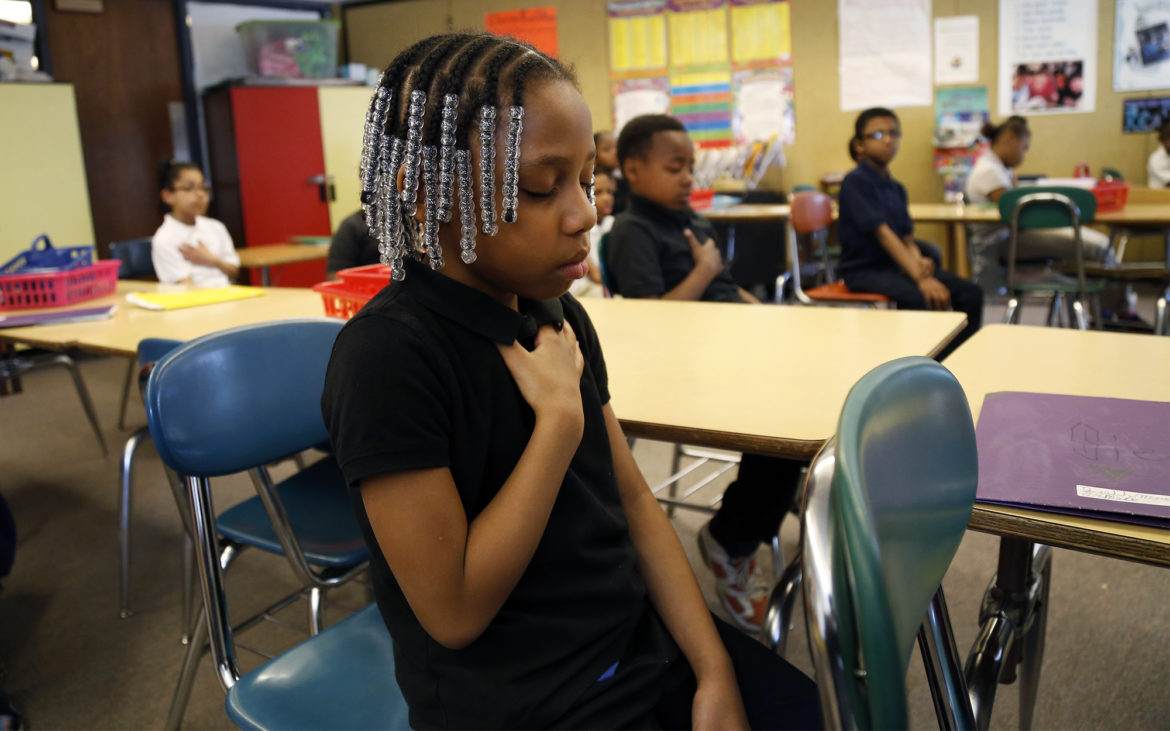 It’s a warm, sunny May afternoon. The kind of afternoon that prompts young minds to think more about escaping school than sitting silent and still at their desks.

And yet, in Elizabeth Fulton-Lasley’s third-grade classroom at Pittsburgh King PreK-8 on the North Side, there are more than a dozen little bodies sitting in chairs, eyes closed, feet on the floor.

The room is without sound other than the voice of teacher Kathy Flynn-Somerville. She’s leading the students through a body scan, starting with their hair and moving down through their foreheads, eyes, cheeks, neck, chest, spine, hips, knees and feet.

“Can you imagine the blood flowing through your legs?” Flynn-Somerville says.

A chime playing from her phone alerts the students to open their eyes and return their focus back to the classroom.

“I didn’t feel my body because it felt like my body went to sleep,” says My’Ona Mollet, 9.

“It’s a really good thing to do if you are stressed or upset because it really calms you down,” 8-year-old Laylah Dukes reflects.

There’s at least one naysayer — a boy sitting with his arms crossed and insisting the exercise is doing nothing for him.

Fulton-Lasley says students, for the most part, like the exercises. “The class receives it open-hearted. They will stop in a lesson and say, ‘Can we do it?’” 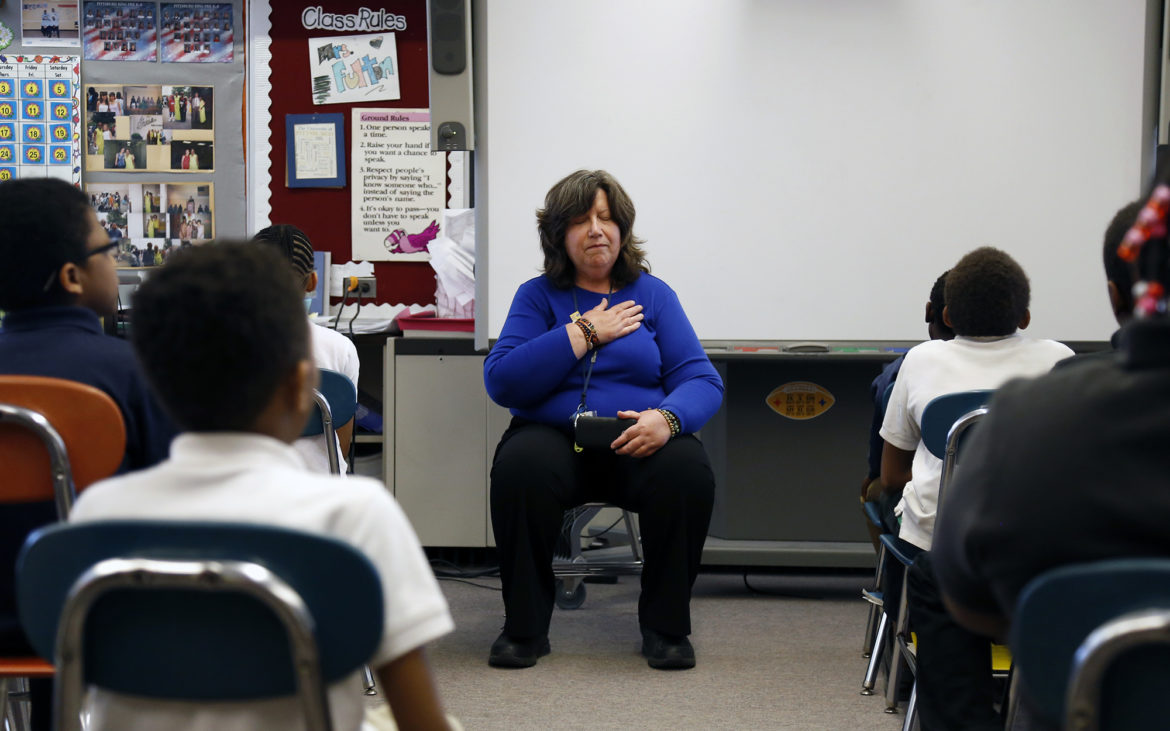 Deadly school attacks — like those in Sante Fe, Texas, this month and Parkland, Fla., in February — are prompting schools to beef up security. Districts all over the nation are considering arming teachers and hiring more resource officers.

But some districts, including Pittsburgh Public Schools, Mt. Lebanon and North Allegheny, are looking at the peacekeeping side of things as well. They’re using mindfulness practices to reduce stress and anger among staff and students, to improve mental health and to create a calm and compassionate atmosphere in their schools.

The mindfulness practices are being used in a range of situations. Second graders use mindfulness to regroup after recess. The practice is helping high schoolers with disciplinary issues to pause and think before acting. Similarly, school administrators and teachers use mindfulness to improve focus and reduce knee-jerk reactions to student behavior or other factors. King second-grade teacher Kristy Rodriguez says practicing mindfulness “helps to relieve my stress and helps me to remain calm.”

Building compassion is also a major goal of mindfulness.

”Compassion fatigue is rampant in schools. We need more compassion and less stress so [teachers] are more available and present for students,” says Stephanie Romero, a former teacher and executive director of Awaken Pittsburgh.

“If we train our brain to respond and pause before we react, it can be transformative.”

Flynn-Somerville is a teacher on special assignment to create a mindfulness curriculum for Pittsburgh Public Schools. Her position was created after she used mindfulness as a classroom teacher with students in grades 3-5 at Pittsburgh Miller PreK-5 in the Hill District during the 2016-17 school year.

This year, she started her work at King and Pittsburgh Minadeo PreK-5. The plan is to implement the program in all of the district’s schools. The effort could take up to five years.

Flynn-Somerville has practiced and trained in mindfulness since she was in high school. She has conducted mindfulness training with Superintendent Anthony Hamlet’s academic cabinet and for principals’ groups.

She also held a session with Hamlet, who likens it to the visualization he practiced as a college football player. Hamlet says mindfulness is an important component to the district’s social and emotional learning initiative.

Flynn-Somerville explains: “If we train our brain to respond and pause before we react, it can be transformative.”

So what is mindfulness?

Mindfulness is “the ability to pay attention in the present moment, right now paying attention. What is happening inside of you and outside of you? What are my emotions, my feelings, my body sensations and what’s going on around me?” Romero says.

It’s a secular version of Buddhist meditation practices. The methods are used by business leaders, performers and athletes to intensify focus and improve performance and productivity.

There is still a lot of disagreement about how effective mindfulness is, despite a number of efforts to study it. But a National Institutes of Health study found that five weeks of mindfulness practice appeared to improve classroom behavior among low-income and minority students in California.

Fulton-Lasley says she notices that when her students practice mindfulness it “makes them more focused on their assignments.” 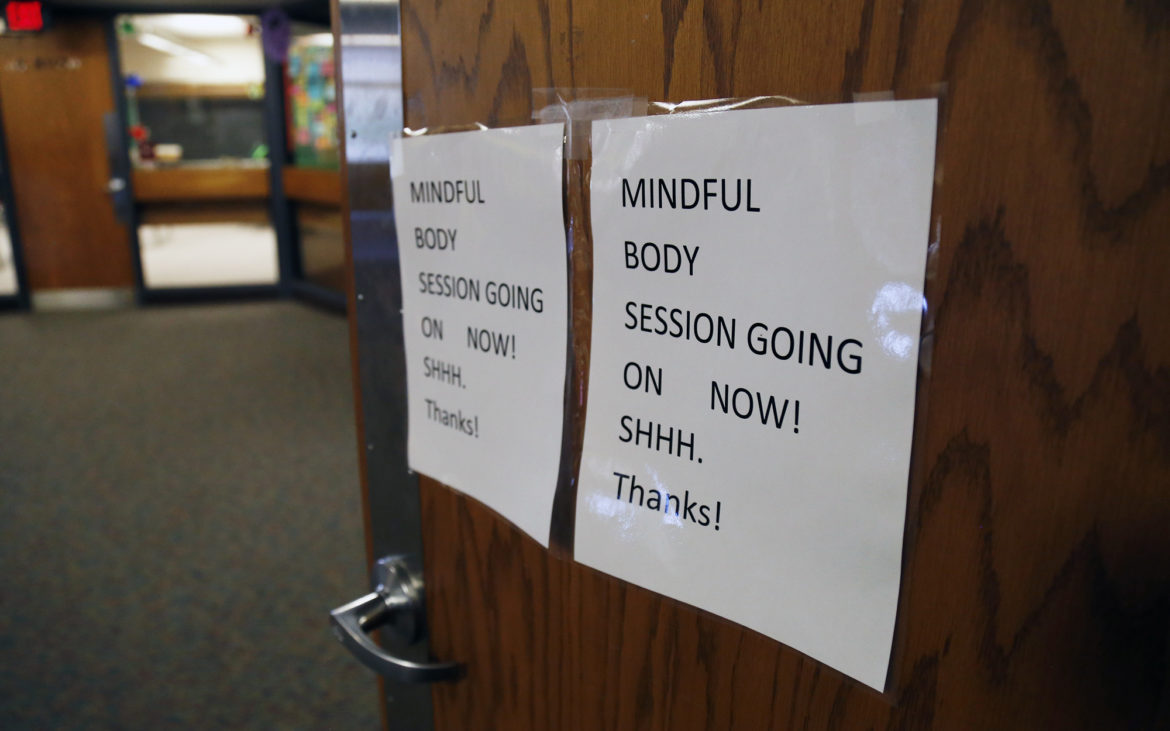 There may be some science behind the effects of mindfulness.

MRI scans on the brains of individuals who are “long-term” meditators — 10,000 hours or more — show the prefrontal cortex portion of their brain is larger, says Barry Kerzin, the personal physician to the Dalai Lama who led a May 9 seminar on mindfulness in Pittsburgh.

The prefrontal cortex, he says, is used for the highest level of thinking like planning, reasoning, imagination, pro-social behavior, compassion and sense of self.

He also adds that mindful meditation “addresses the hidden epidemics of stress, anxiety and depression.”

At this point, it’s hard to say exactly how much of an effect mindfulness is having in local schools. In surveys, results show the students appear to like the practice and use it outside of the classroom.

When Flynn-Somerville surveyed her students at Miller, she found that 80 percent of the 96 students say they enjoy it, 71 percent say it helps them with their own lives and 43 percent say they teach it to others.

At Brashear, the program started with 27 students and ended with 23 students. Some of those students reported that mindfulness helps them to stay calm and deal with anger.

Tokarski-Jones says she hopes to get more grant money next year to expand the program to more students.

“We realized that a number of our students were experiencing tremendous amounts of stress,” Scherrer says. “We wanted to teach them some strategies and techniques that could really help them deal with that stress.”

North Allegheny has more than 8,000 students and 1,000 staff members in 12 buildings. Each building has a mindfulness team.

The district also recently decided to add school resource officers to its high school buildings for next year. 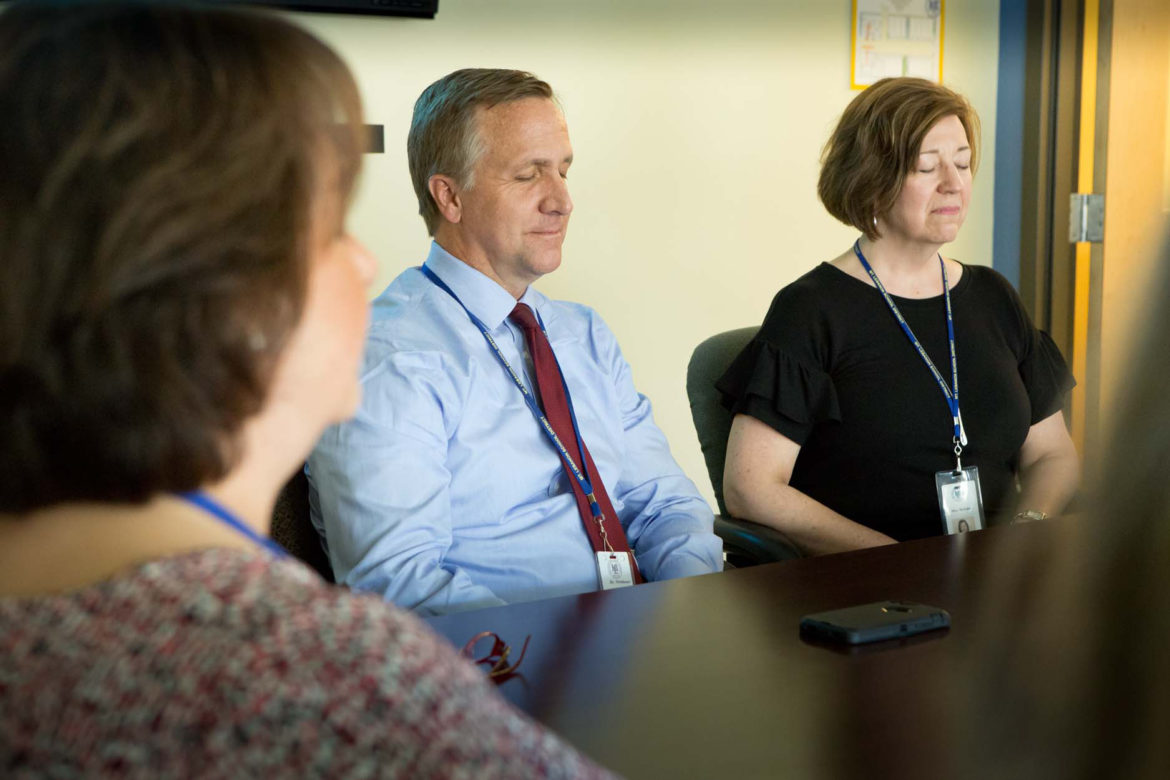 Mt. Lebanon Superintendent Timothy Steinhauer has practiced mindfulness since 2014. After finding it useful in his personal life, Steinhauer ordered mindfulness apps for his entire staff and he holds mindfulness sessions for them about twice a month.

Steinhauer also attended the Kerzin seminar. Afterward, he gathers administrators and support staff in his conference room for a mindfulness session. He starts by using the Headspace app to lead them through thoughts of appreciation, then leads the rest of the session himself.

Steinhauer tells staff that he doesn’t care if they sleep through the 10-minute session. “How nice it is to sit for 10 minutes,” he says.

Practicing mindfulness in the schools

There’s no single way to practice mindfulness in schools. Some educators, like Flynn-Somerville, guide the students personally through meditations. Others use apps, such as Inner Explorer created for use with school children.

At Brashear, mindfulness got started with refugee students in the English as a Second Language [ESL] program, Romero says.

“The refugee population has experienced a lot of trauma and fear, anxiety and depression,” Romero says. “...With the refugee population, we are trying to get them to have some tools to use to deal with anxiety, for working with their emotions, anger [and] getting some space in between your emotions and your actions.”

That same effort is at the heart of the work with the Brashear students who were chosen because of their disciplinary records, says Tokarski-Jones. Though identified by disciplinary history, the students are not forced to participate. “From that, we asked the kids ‘Do you want to be part of this?’ It’s all about being a better person.”

Those who choose to participate sign a contract agreeing to abide by rules. Show respect. Accept responsibility for your actions. Avoid negative conversations and activities. 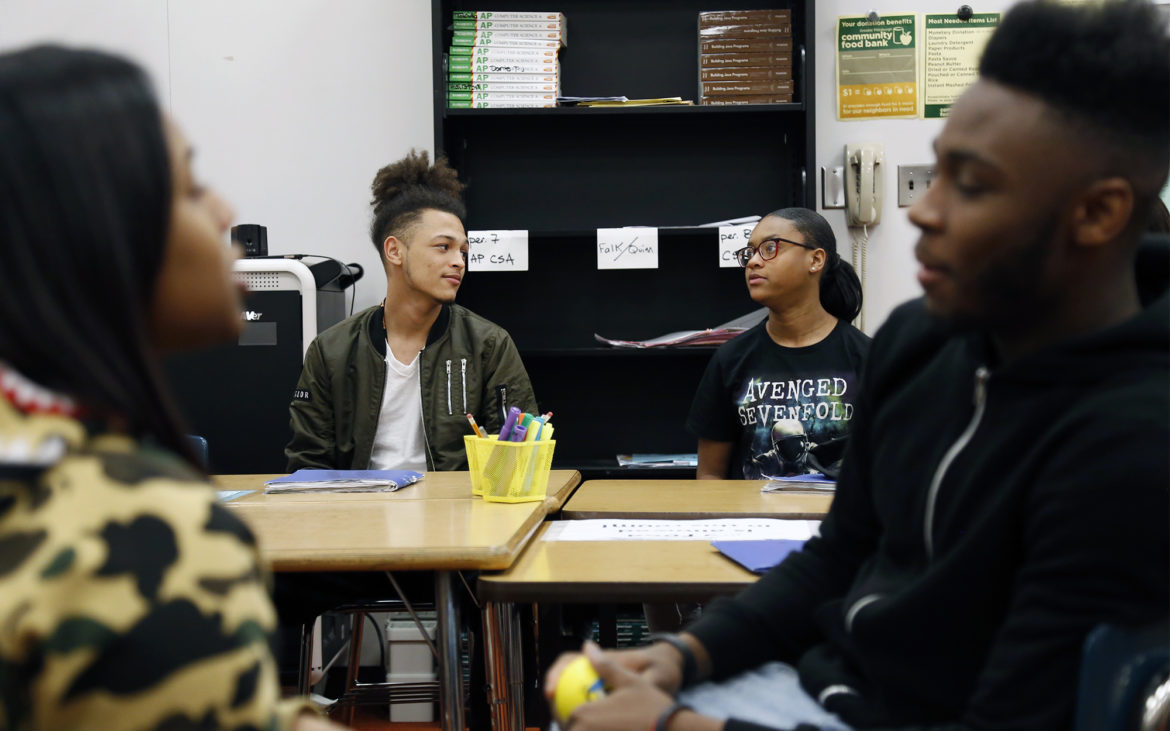 The students learn through mindfulness and its associated exercises how to make better choices and reduce the number of disciplinary referrals they receive.

As with the younger students, the high school students spend part of their sessions with eyes closed and steady breathing. They also participate in exercises and discussions. During a recent session, they learn about listening by breaking off with partners and comparing the experiences of talking over each other versus talking one at a time.

The students express frustration, anger and irritability as they talk over one another. They find it more satisfying to have someone pay attention.

“It gives us a chance to really understand people better,” Stephen Suss, of Awaken Pittsburgh, tells the students.

Jerimyah Newton, 17, remarks that he now thinks before he acts. “Last week, something came up. It escalated but I didn’t get as crazy as I would have,” he says.

Classmate Ivy Le, a 17-year-old who participates in the mindfulness classes as a student leader and teaching assistant, says she believes mindfulness could help most students.

“It changes your perspective. I have a lot more to think about now — how my actions would affect another side.”

The many ways of being mindful

In Dori Oldaker’s second-grade classroom at Washington Elementary in Mt. Lebanon, students return to class on a recent Wednesday from a lively recess break, flushed and thirsty. They take turns at the water fountain and restroom. Then they find their “quiet spot,” either on the floor or in their chairs.

Oldaker uses the Inner Explorer App to guide the children through a short mindful meditation. They start with the “shark fin,” moving their hand sideways, thumb toward the face and lowering it from their head down to their hearts. They close their eyes along the way and remind themselves of the five S’s required for their quiet time — sit up straight, sit still, sit silently, soft breathing, shut eyes.

With their hands on their hearts, they say, “I have the power to make wise choices.” The exercise ends with a song about positive reinforcement. The students are calm and ready to focus on their work.

Oldaker, who is also the varsity girls basketball coach, uses the Lucid app with her athletes.

“It really helps our players to stay present, to stay in the moment,” she says. “It limits their distractions.”

Flynn-Somerville says the best indication she’s had that mindfulness is helping students came from a photo taken in the school office at Minadeo. A boy had been sent to the office for misbehaving. Office staff snapped a photo of him sitting in a chair, waiting to see the principal. He had his eyes shut, palms up and appeared to be meditating.

“What better proof could you ask for?” says Flynn-Somerville.

*PublicSource has received funding from the Staunton Farm Foundation.