Ask any journalist, and they’ll tell you that perhaps the most valuable element of their work is time. Time, how much or how little one has to report, photograph, film, write and record. It determines not just what kind of story you tell but also how you tell it.

Here, at PublicSource, time is something we journalists are given to tell important stories with depth and context. For me, a prime example is the time I spent working on our Failing the Future series. 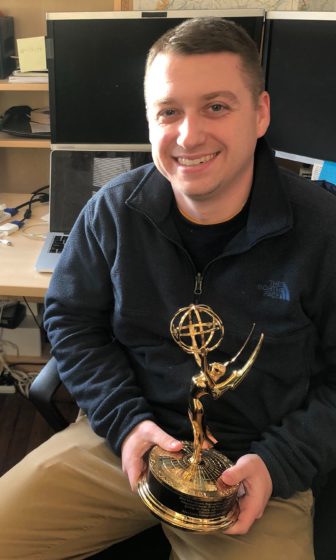 The project, which published over the course of months last year, examined the funding crisis of public education in Pennsylvania and how that’s felt in very real terms in schools across our region. As a visual storyteller here at PublicSource, I spent time at several of these schools, documenting these inequities through photo and video. I filmed students talking about what they wish their school had, and even traveled to Harrisburg with PublicSource education reporter Mary Niederberger to film an interview with the state Secretary of Education Pedro Rivera.

Most of the time, though, I spent at Sto-Rox Junior-Senior High School, located outside Pittsburgh and just 3 miles from the Montour High School, where resources and opportunities reflect a much different world. There students have district-issued Chromebooks and can visit an in-school coffee shop. For days at a time, over the course of a school year, I was filming in Sto-Rox classrooms, the cafeteria, the football field and gym, and, of course, at prom and graduation. I produced a series of video stories focused on three students who told the stories of what it’s like to get an education at Sto-Rox, what it’s like to be a Sto-Rox student and what life is like living in the neighborhood.

That video series went on to win a 2019 Mid-Atlantic Regional Emmy in the Education/Schools — News Story or Series category. We are grateful for the recognition. But we do this work, not for awards, but to take the time necessary to dig into important stories and amplify the voices that are seldom heard, in this case, of students at an underfunded high school like Sto-Rox.

This kind of journalism isn’t easy, and it wouldn’t be financially possible without the support of our donors. Now is a great time to support this work; we have until Dec. 31 to raise an additional $5,000. With your donations, we can better afford more time needed to do important reporting about critical issues in the Pittsburgh region.