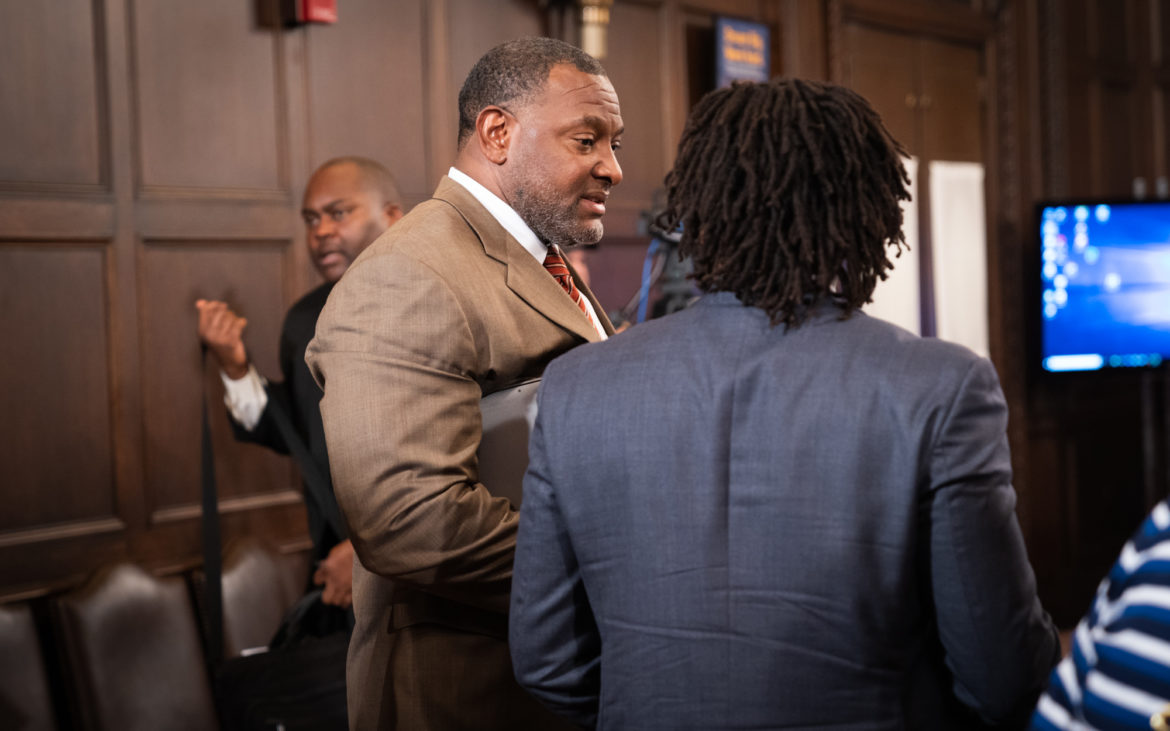 Update: Within an hour of City Controller Michael Lamb's announcement today that he had notified the State Ethics Commission about Pittsburgh Superintendent Anthony Hamlet's missing disclosure forms, Hamlet filed forms for 2017 and 2018. The forms indicate that he received no outside compensation and no gifts, transportation or hospitality.

For the past two years, Pittsburgh Superintendent Anthony Hamlet has not filed forms that disclose gifts, travel or outside income that he may have received. Public officials and employees involved in spending must file the forms annually, a requirement of the State Ethics Commission.

And Hamlet is not the only one at Pittsburgh Public Schools who has neglected filing the statements of financial interest.

Board members Sala Udin and Moira Kaleida did not file forms for 2018, according to records kept by district solicitor Ira Weiss. For 2017, Udin, Kaleida and Lynda Wrenn did not file forms. Hamlet's chief of staff Errika Fearbry Jones has not filed the forms for three years, and Chief of Operations Pam Capretta failed to file for the past two years, according to a review of records.

The forms are receiving scrutiny because of an April trip that Hamlet and four other district administrators took to Cuba on the tab of the Flying Classroom. The company was a district vendor whose $73,000 contract expired in January. Two district investigations and one at the state level are ongoing. The probes are examining whether district officials violated district policy or a state ethics law by accepting a gift from a district vendor.

The annual deadline for filing the statements of financial interest forms for the previous calendar year is May 1. That means forms for 2018 that haven’t been turned in are 30 days overdue.

The Cuba trip would not be required to be listed on disclosure forms until they are due next year.

The forms require public officials and employees to disclose, among other things, all sources of income that exceed $1,300, debts of more than $6,500 and gifts valued at more than $250. Home mortgages do not need to listed nor do personal gifts from family and friends, though a lobbyist cannot be listed as a friend.

Public officials and employees must also report the source and amount of reimbursement for transportation, lodging or hospitality that is received in connection with public office or employment for amounts exceeding $650.

City Controller Michael Lamb raised the issue about Hamlet’s missing disclosures when he received a batch of forms from the district. Lamb, who is also the school district controller, collected forms for the past three years. He sent a letter inquiring about Hamlet’s failure to file on Thursday to district solicitor Ira Weiss.

Weiss said he responded to Lamb, saying he would look into the matter.

On Friday, Lamb's office announced that he filed a complaint with the State Ethics Commission over Hamlet’s failure to file disclosure forms for 2017 and 2018.

The collection of financial interest forms from 2016, 2017 and 2018 for Pittsburgh school district officials — also received and reviewed by PublicSource on Wednesday — confirm that Hamlet filed a form for 2016, but not for 2017 or 2018.

Deputy Superintendent Anthony Anderson completed forms, but he didn’t complete the sections on whether he received gifts, transportation, lodging or hospitality in 2017.

District spokeswoman Ebony Pugh said Hamlet did not receive the financial interest forms for 2017 or 2018 or any reminders from the solicitor’s office in his district mailbox. She said all of his mail is logged, and the logs show no entry for the forms.

Pugh said Hamlet is out of the district today to attend a funeral but that he and Fearbry Jones were working to get the forms filed for 2017 and 2018. Pugh said Capretta believed she filed a form for 2017 but said the form for 2018 is currently sitting on her desk.

Pugh said she expected the process for filing the forms to be included in a review of contracting and ethics policies by the district solicitor. The school board voted May 22 to authorize the review.

Kaleida said she is working on her form for 2018 and plans to file soon. Udin could not be reached for comment.

Robert Caruso, executive director of the State Ethics Commission, said the purpose of the disclosure forms is to ensure that public officials and employees are not receiving inappropriate gifts or compensation from entities doing business with public bodies.

The commission has not conducted a compliance audit of the Pittsburgh schools in “six or seven years,” Caruso said, but that one may be forthcoming.

As part of a compliance audit, commission investigators cross-reference district contract awards with any gifts that public officials report on their forms to make sure vendors haven’t had inappropriate influence while trying to secure contracts.

Caruso said a trip similar to the one Hamlet and administrators took at the expense of the Flying Classroom is required to be reported on the ethics forms. State law requires transportation, lodging and hospitality to be reported even if a trip is included in the vendor’s contract.

District officials have said the Cuba trip was a professional development component of the expired contract. On May 17, Weiss hired former Pittsburgh solicitor Lourdes Sanchez Ridge to investigate the matter. In addition, the school board has authorized Weiss to review the district’s contracting and ethics policies.

Lamb has also questioned the school district’s process for awarding professional services contracts. He said some of the contracts were awarded at Hamlet’s recommendation, without comparative proposals or against the recommendation of lower-level staff.

Deliberate failure to file completed disclosure forms by elected officials who draw a salary can result in their pay being withheld. They can also be removed from office. School board members are elected but don’t receive pay.

Salary cannot be withheld from non-elected public employees, such as the superintendent. They cannot be removed from their positions for failure to file these forms.

Instead, the commission sends notices on non-compliance and provides 20 days for the individuals to file the forms. If they fail to do so, a second notice is sent via certified mail giving 10 days for filing.

If the individual still has not filed, they could face a $250 fine, Caruso said.

The ethics commission has the authority to investigate alleged violations of the state Ethics Act and to levy fines or refer matters to the criminal justice system.

Editor's note, added June 3: The story was updated to identify three board members who did not file disclosure forms in 2017.