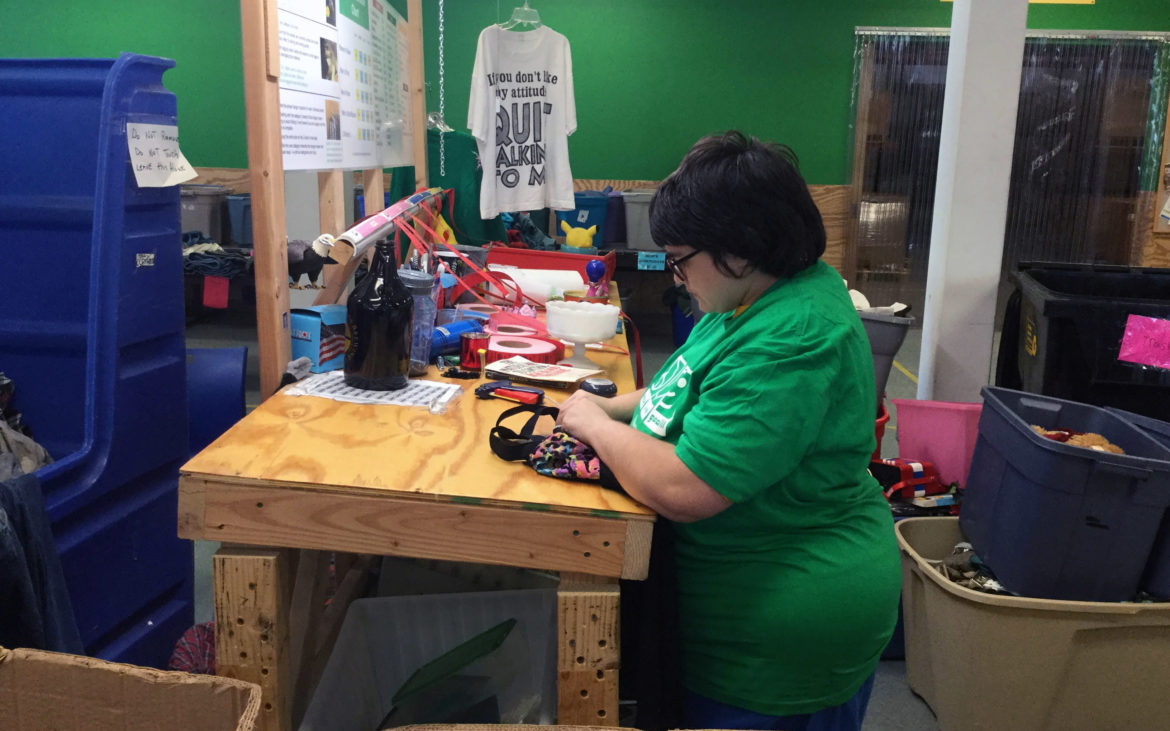 Darci Landa sorts clothing at the Goodwill of Southwestern Pennsylvania Donation Processing Center in Lawrenceville. A former client of its sheltered workshop, she is now an employee earning $7.25 per hour. “I do a little bit of everything here,” Landa said. (Photo by Mary Niederberger/PublicSource)

Jack McCabe has been scanning books, among other duties, at the Goodwill Donation Processing Center in Lawrenceville since 1992. Darci Landa has a decade’s worth of experience at the center, and today she was sorting through piles of donated clothes.

And while they are veterans at their duties, McCabe of Upper St. Clair and Landa of Baldwin just became full-fledged employees this summer — their job titles are production associates.

McCabe, 46, and Landa, 31, were previously regarded as clients of Goodwill’s sheltered workshop program. Sheltered workshops are most often characterized by being workspaces where people with disabilities are trained in often menial or repetitive tasks; only work alongside other people with disabilities, instead of in an integrated environment; and they are usually paid far below the federal minimum wage of $7.25 an hour, sometimes below $2 an hour.

The Goodwill of Southwestern Pennsylvania formally announced on Tuesday that in July the organization shuttered its sheltered workshop programs and transitioned its workshop clients into employees earning minimum wage who will work alongside other Goodwill employees.

In December 2015, the Disability Rights Network of Pennsylvania called for the elimination of subminimum wages paid to workers with disabilities and for a ban on creating new sheltered workshops.

The network cited a 2014 PublicSource investigation that chronicled how some 13,000 Pennsylvanians with disabilities were earning an average of $2.40 per hour through the legal use of subminimum wages. Many workers earned as little as a few cents per hour. Jack McCabe sorts books at the Goodwill of Southwestern Pennsylvania Donation Processing Center in Lawrenceville. Previously, Jack was paid below the federal minimum wage to do the same work as a client of the sheltered workshop. As of this summer, Jack and 11 other workers with disabilities are employees who earn $7.25 for their work. (Photo by Mary Niederberger/PublicSource)

Michael J. Smith, president and CEO of Goodwill of Southwestern Pennsylvania, said work started on the transformation in 2015 in response to calls from the disability rights community and because of the realization that it was the logical evolution of a program that started decades ago to offer employment and socialization opportunities to individuals with cognitive and physical disabilities.

“I know some people feel we should have done this earlier. But we are doing it today,” Smith said at a Tuesday press conference and opening ceremony at the Lawrenceville donation center.

Currently, about 13 workers with disabilities are employed at the Lawrenceville center along with 16 other employees. At the donation processing center, employees’ jobs include material handlers, donation sorters, donation taggers, book sorters and book scanners.

Aside from the 13 clients at the Lawrenceville center who became employees, there were 17 clients who chose not to make that transition. Some decided they didn’t like the work and transferred to other Goodwill training programs; some chose other providers, including those who still operate sheltered workshops; and others turned down higher wages because it would interfere with Social Security benefits, said Goodwill Spokesman David Tobiczyk.

This Goodwill also has a sheltered workshop program in Fayette County with about 50 clients. It is unclear how many will make the transition to employment. When they do, Goodwill says their wages will meet the federal minimum by June 2018.

Smith said it has taken about 18 months to transition its sheltered workshop clients to paid employees, some with more responsibility and opportunities than they had in the past. Smith said new employees, who need the same type of job skills training previously offered through the sheltered workshops, will be paid minimum wage during their training.

Similarly, the Allegheny County nonprofit ACHIEVA stopped paying subminimum wages to its sheltered workshop clients in January and instead offers recreational activities and other programming at its centers, said communications manager Lisa Razza.

For those ACHIEVA clients who want to work, there are some minimum-wage jobs available at its pallet plant in Bridgeville and with the landscaping and janitorial services it operates. ACHIEVA also offers clients job skills programs and counselors to help to seek jobs.

“I know some people feel we should have done this earlier. But we are doing it today.”

Don Clark, deputy director of the Allegheny County Department of Human Services, said sheltered workshops, developed decades ago, “were very, very good at initially providing for training, work experience and socialization. Today we are seeking something a little bit more different. Something that has the sheltered workshop but also has additional opportunities.”

All of the current employees who were previously part of the sheltered workshop program are part-time, but there will be opportunity for full-time work with health insurance, said Suzanne Ratnavale, Goodwill’s director of disability services.

After the press conference, Jack McCabe was back at work, scanning books in the donation processing center. He was happy to explain to a visitor why he likes working at Goodwill.

“I like working here because there are a bunch of people here to help me and I like everybody here,” he said.

Smith said the clients-turned-employees appear to understand the significance of their change of status.

He told of a full staff meeting held a week ago when he asked if there were any new employees attending. One of the former clients of the sheltered workshop stood up and said: “I am a new employee.”

Following his lead, each of the former sheltered workshop clients at the meeting announced their new status to the group.