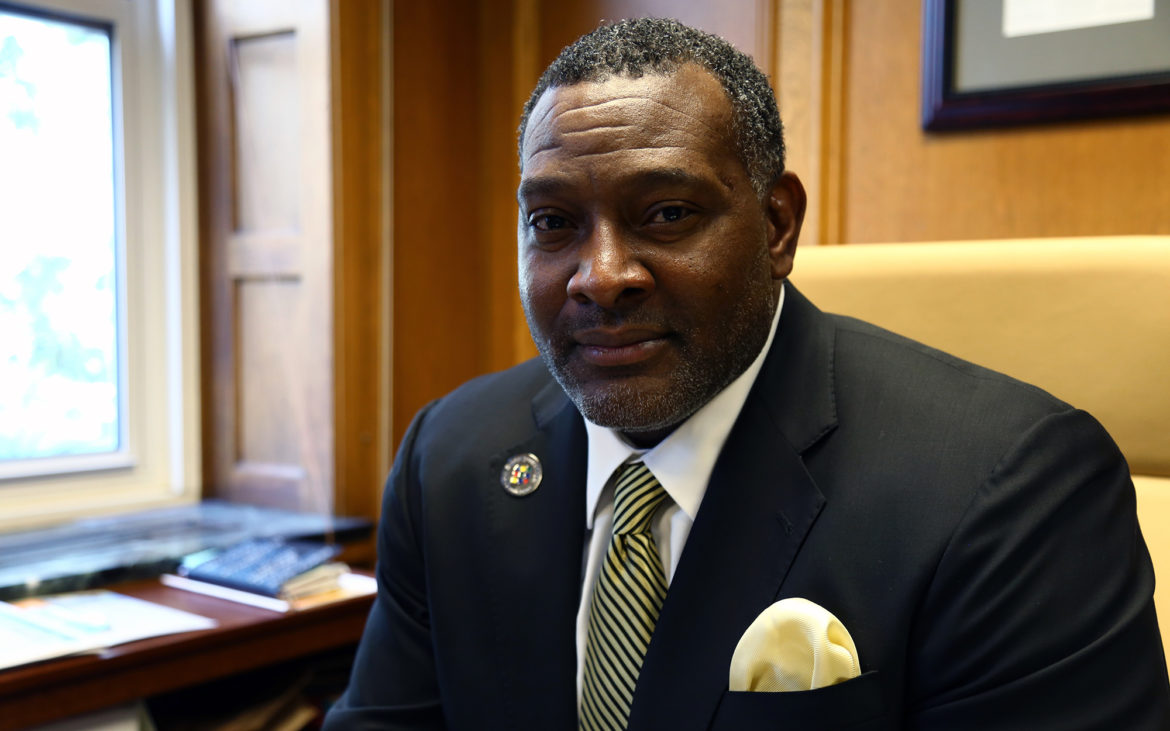 Superintendent of Pittsburgh Public Schools Anthony Hamlet sits at his desk in June on the last day of the 2016-17 school year. (Photo by Natasha Khan/PublicSource)

Those items represent just a partial “to-do” list that Pittsburgh Public Schools Superintendent Anthony Hamlet has created after his first year at the helm of the city schools.

In a wide-ranging Facebook Live interview with PublicSource, Hamlet outlined some of his plans for the district — most of which are included in his recently released five-year strategic plan — and how he will hold himself publicly responsible with an online “dashboard” he expects to be operating by the time school starts next fall.

Hamlet said the district is in the process of developing key performance indicators, though he didn’t offer specifics yet, to be used in the dashboard to assess progress. Those measurements, he said, can be used for the board to monitor the administration, for parents to monitor their childrens’ schools and for teachers to assess and reconfigure their teaching methods, if necessary.

“We will create a public dashboard. We want to be held accountable,” he said.

Hamlet explained that third grade is the grade level in which students take their first state level exams, the Pennsylvania System of School Assessment exams.

But more importantly, it’s the year when a transformation takes place in the students’ academic lives. It’s when students go “from learning to read to reading to learn. That’s when it shifts that when you need to understand how to read to learn,” Hamlet said.

Hamlet believes the work getting students to read on grade level needs to start in the Pre-K programs, where low-income students often enter with language deficits of hundreds of thousands of words.

WIth help from the Legislature, Hamlet would like to find funding to offer Pre-K and preschool programs to all students in the Pittsburgh district so that literacy skills and language gaps can be addressed before students start elementary school. Currently, about 2,000 students are served, but Hamlet said there are 2,300 others who need access.

On improving inclusion of black students in the gifted program

PublicSource in April reported on large disparities in the number of black students in the district’s gifted programs. District statistics showed that while 18 percent of white girls were chosen for the program, only 4 percent of black girls were included. Similar statistics exist for black boys.

Hamlet said district administrators are seeking ways to increase inclusion but that universal screening may not be the answer because the district has not yet found a screening exam that is not biased.

“If you apply universal screening, it can weed out some kids who can get in via an alternative route,” Hamlet said.

The Education Law Center reported in 2015-16 that the Pittsburgh district issued 8,200 suspensions, with black students four times more likely to be suspended and 79 percent of black students being suspended in grades Pre-K through fifth grade.

Hamlet said 90 percent of students referred for behavioral issues are suspended. “That’s something we are looking at systemically to change,” he said.

He predicted that statistics would show fewer suspensions for the current school year of 2016-17.

“I come from a lens of class size reduction,” he said.

But more state funding is necessary for that to take place.

In Florida, where he worked previously, mandated class size reductions were funded by the state.

On decentralizing English as a Second Language education

As is, students who require English as Second Language services must travel to ESL/ELL centers through the city rather than attending their neighborhood feeder schools.

Hamlet, hearing complaints about long bus rides for the students, decided to ride the bus with them.

“I think I arrived at 5:35-5:45 in the morning and was almost late. We are talking about elementary students. We passed three, four schools that they could have attended. It was a 50-minute drive to Arsenal. Also, on the way back, which means they can’t access their before school programs, their after school programs. But also just as important, the parents — refugee and immigrant parents — don’t have access.”

Hamlet said the district will move forward over the next two years to make it look different.”

On his personal life

Hamlet is committed to hiring more teachers who have shared some of the same difficult experiences as current students. In this interview, the superintendent spoke of being an educator who has walked in the shoes of some students.

One of his early obstacles was being run over by a truck at age 5. His parents were told he would be able to walk, but would never play sports again. He proved them wrong by by playing football at the University of Miami and having a brief NFL and Canadian Football League career before becoming an educator.

But perhaps a bigger challenge was watching many of his adult male relatives become incarcerated.

Hamlet said he had mentors in the form of his high school football coach, school resource officer, grandfather and grandmother.

But largely, it was his mother, a social worker and juvenile probation officer, who made it clear she had “high expectations” for him.

Just as Hamlet’s mother had high expectations for him, so does he for Pittsburgh students.

While the GPA required to qualify for the Pittsburgh Promise scholarship is 2.5, Hamlet wants students to strive to achieve a 3.0, which is a better indicator of college success.

He said in setting the higher standard for the students he wants to “introduce as a notion to reach for the stars and catch the moon.”