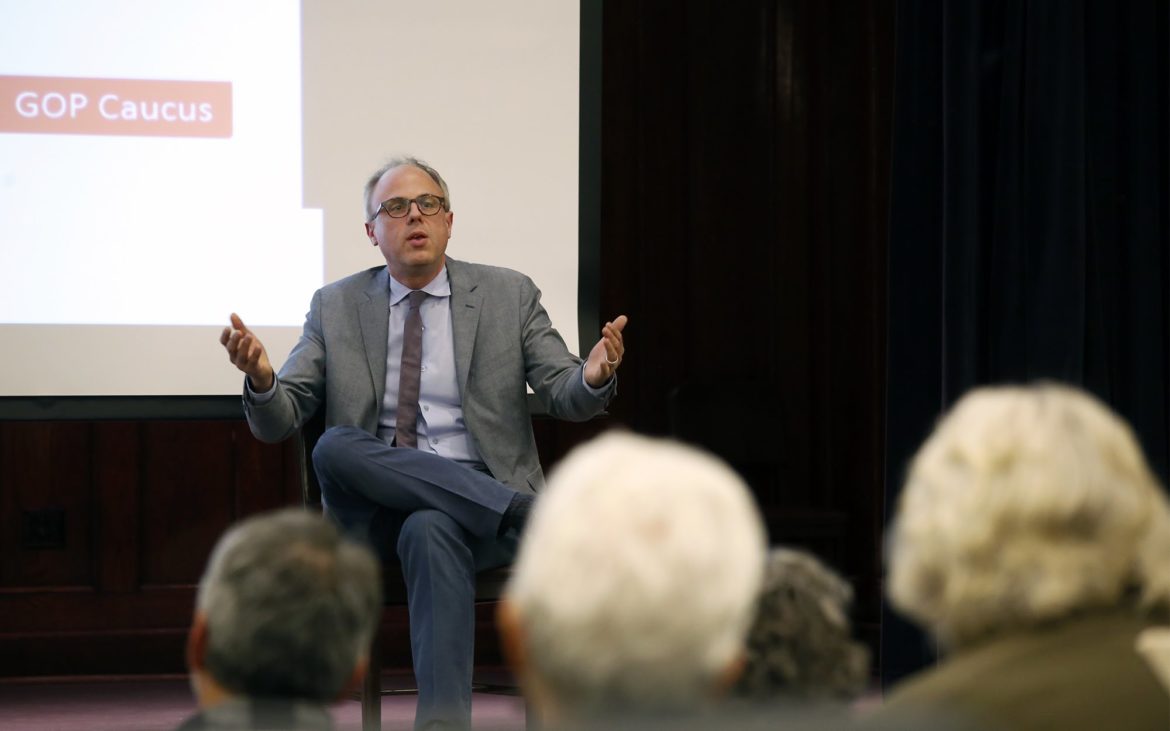 David Daley, author of the book "Ratf**ked: The True Story Behind the Secret Plan to Steal America's Democracy,” speaks at the Carnegie Library of Pittsburgh’s Homewood branch on April 11, 2018. (Photo by Ryan Loew/PublicSource)

We tend to think voters choose politicians. But what if politicians actually pick their voters?

That’s exactly what has been happening in America, thanks to gerrymandering, according to journalist David Daley, author of “Ratf**cked: The True Story Behind the Secret Plan to Steal America's Democracy.”

Election map gerrymandering is a problem across the nation that Daley said has not only changed election outcomes but also who runs for public office and how partisan they behave. And, as Daley spoke in Pittsburgh at a Wednesday event hosted by PublicSource, he had plenty of Pennsylvania-specific material to work with.

Hours before his talk, Republican lawmakers in Harrisburg gutted a bill intended to reduce partisan influence on future redistricting.

“Pennsylvania has been ‘ground zero’ all decade with this nation’s problem with extreme partisan gerrymandering,” he said.

Think Goofy kicking Donald Duck, as Pennsylvania’s bizarrely shaped (and now defunct) 7th congressional district has been described. The district’s odd profile is the product of a 2011 election map drawn under the control of state Republicans, who’ve since seen it thrown out as unconstitutional.

Daley, a senior fellow with FairVote, showed the crowd of about 80 a version of the 7th district from the 1950s. It had a geographically compact shape that didn’t change much in shape over numerous redistricting efforts in the following decades.

But suddenly, after the 2010 U.S. Census, the district was reengineered to span across a jagged swath of the Southeastern portion of the state. It’s no accident, Daley explained, but part of a deliberate national strategy to redraw districts to benefit Republicans.

“The fight for fair maps is not an arc that necessarily bends toward justice, it is a game of whack-a-mole.”

Both parties are guilty of gerrymandering, he said. Whether caused by Republicans or Democrats, Daley explained that gerrymandering creates districts that are less likely to have competitive races, voters who see the power of their votes carved away and legislative bodies full of staunch partisans who are unwilling — or have little incentive — to compromise with members of the opposing party.

Back in 1994, Daley said, the U.S. House of Representatives had 252 members from both parties who overlapped ideologically. That allowed for compromise across the aisle. By 2013, Daley said that ideological middle ground eroded to include only four members.

“Uncompetitive districts drive those bridge builders into extinction,” Daley said. “You don’t have any incentive to compromise ever.”

In his book, Daley examines the Republican strategy to unleash the power of demographic data and lock down congressional seats by controlling redistricting after the 2010 census.

After the election of President Barack Obama in 2008 and demographic shifts nationwide, the long-term outlook for Republicans seemed grim, Daley explained. But election maps are drawn by state legislatures, and by prioritizing local races, Republicans saw an opportunity to control redistricting with innovative demographic mapping.

How stark was the impact? In 2010, Pennsylvania’s statehouse was a near even split between Republicans and Democrats. But Republican victories in elections gave them power over redistricting, which cut the number of competitive districts and led to a 13-5 Republican majority in Pennsylvania’s congressional delegation.

Daley points to similar gerrymandering in Maryland where Rep. Roscoe Bartlett, a 20-year Republican veteran of Congress, saw his career end after Democrats cut supporters from his district. In 2010, Bartlett had won by 28 percentage points. But then the district was starkly redrawn to favor Democrats, and in 2012, he lost by 21 percentage points.

Martin O’Malley, the state’s Democratic governor during redistricting, cited a duty to elect more lawmakers from his party, Daley said. Maryland’s redistricting map is now being challenged before the U.S. Supreme Court.

“Gerrymandering,” a term coined in the early 19th century, is by no means a new practice. But with the dawn of big data and computer analytics, Daley describes it as entering the “steroids era.” 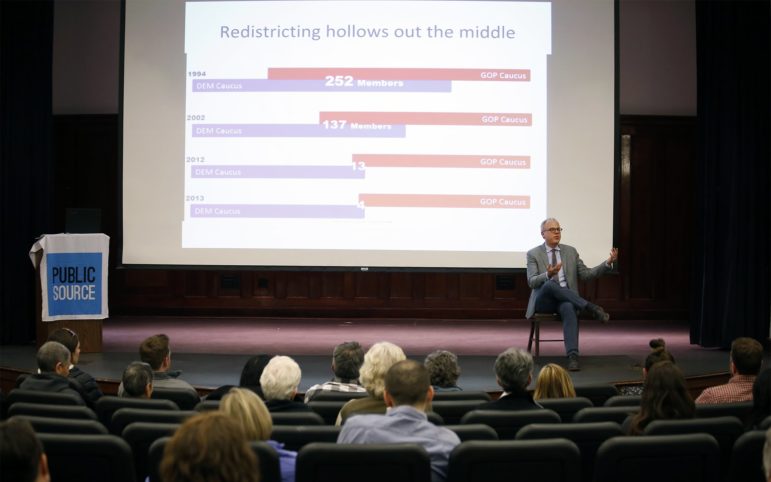 Last year, the League of Women Voters of Pennsylvania led a successful challenge to the state’s map, claiming it violated Pennsylvania’s Constitution. The state Supreme Court ordered the map to be redrawn, drastically altering districts in an effort to make them more competitive.

Republicans have since called for the impeachment of judges on the state Supreme Court. And, on Wednesday, state Rep. Daryl Metcalfe, R-12th District, introduced an amendment to alter a bill designed to reduce the influence of politicians in drawing election maps.

“The best way to make sure we have citizens actually being the ones redrawing, citizens who are held accountable to their fellow citizens who elect them to office...is to totally gut and replace this bill,” Metcalfe said yesterday.

Daley said he was still digesting the events; though not a surprising turn of events to Daley, he described the last-minute change as shutting out citizen voices.

“The fight for fair maps is not an arc that necessarily bends toward justice, it is a game of whack-a-mole,” Daley said, with opponents “eager” to knock down reforms.

Without reforms, districts maintain their odd shapes. Daley describes them as efforts to limit democracy.

“Pennsylvania has been ‘ground zero’ all decade with this nation’s problem with extreme partisan gerrymandering.”

North of Philadelphia near Norristown, Daley describes crossing between what were then the 13th, 6th and 7th congressional districts. In just 1 mile, you can hit all three districts, he said.

The 13th, which elected a Democrat, is poor, with help-wanted signs in Spanish and residents walking home from chain store jobs, Daley said. But then he describes the scene changing to be “leafy and green” with dads walking dogs with “flowing tresses.”

This is the 7th, represented by a Republican. Not far away is the border to the 6th, which also elected a Republican. Daley started to notice streets named for presidents and a gas station named, “Liberty.” Then he realized he’s in Valley Forge, where the Continental Army famously weathered a brutal winter during the Revolutionary War.

“It’s where the army persevered through its most desperate moments in a fight for freedom and liberty,” Daley said.

But on his drive, Daley saw it as an illustration of deliberate efforts to impede those values.

“It’s where we’ve now carved our democracy up beyond all recognition,” he said, “intentionally and by design.”