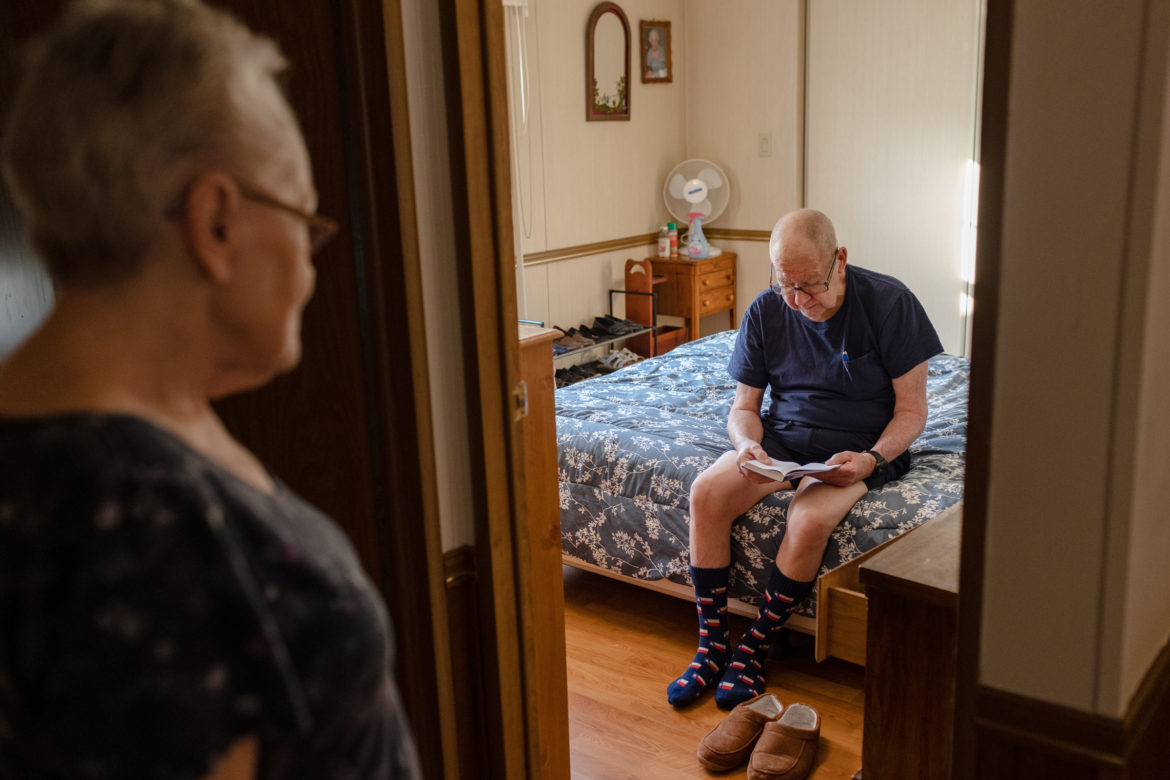 Betty Kinter is one of roughly half a million Pennsylvanians who care for a family member or friend living with Alzheimer’s disease or another form of dementia. (Photo by Quinn Glabicki)

Crisis of Care: The number of people living with Alzheimer’s disease is expected to swell exponentially in Pennsylvania, one of the oldest states in the nation. But efforts to prepare are falling short.

The first time Betty Kinter’s husband disappeared, he left their Murrysville house to grab the garbage bin at the end of their driveway and got lost. Luckily, a neighbor spotted him sitting on a wall at the beginning of their housing development, picked him up and brought him home. “I was pretty hysterical,” Kinter recalled.

The second time he disappeared, he became confused and thought someone was trying to kill him. Fearing for his life, he fled the house. After about 45 minutes of searching, the police found him hiding in the shed in their backyard.

Related: The coming crisis in dementia care and why Pa. is woefully unprepared

In Pennsylvania, half a million people care for a family member or friend living with Alzheimer’s disease or another form of dementia, according to the Alzheimer’s Association, the largest nonprofit funder of Alzheimer’s research in the country. For those caregivers — who are almost always unpaid, often battle their own health issues and have little time for themselves — the stress can be immense.

Like many people with dementia, Kinter’s husband suffers from not just poor memory but symptoms like disorientation, mood swings and “sundowning,” which means experiencing unusual behavior like paranoia or hallucinations in the early evening. He sometimes dumps the meals she prepares in the garbage or asks to be taken to his “other house,” though no such home exists. He has a watch that tracks his movement and a door alarm so Kinter knows when he comes and goes. His temperament can shift from one moment to the next, leaving her perpetually anxious and exhausted, waiting for the next incident. “It threatens your sanity,” she said. “Because you don’t know where or when or how.” 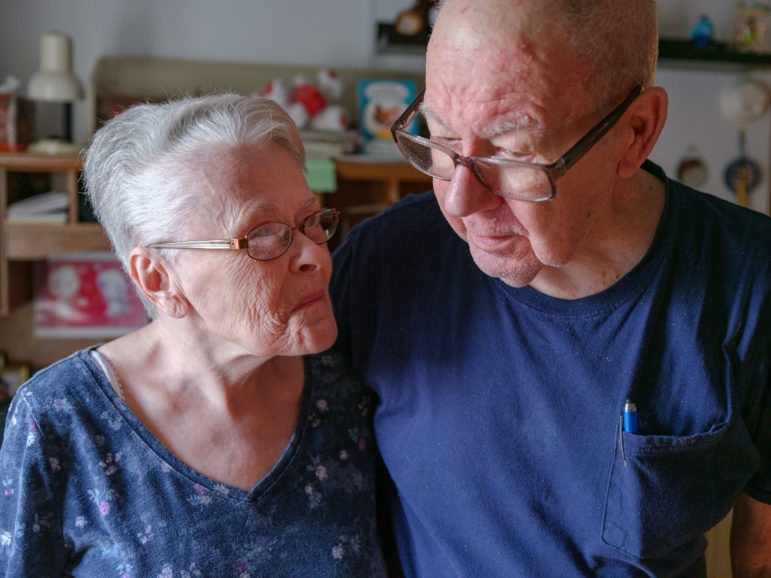 At-home dementia caregivers, like Betty Kinter, are almost always unpaid and often battle their own health issues, with little time for themselves. (Photo by Quinn Glabicki)

Caring for someone with dementia comes at the expense of the caregiver’s own mental and physical wellbeing: Almost a quarter of unpaid Alzheimer’s and dementia caregivers in Pennsylvania reported being depressed, according to the Alzheimer’s Association. Throughout the country, nearly six out of 10 caregivers rated the emotional stress of caregiving as “high or very high.” The pandemic has, predictably, made caregivers’ mental health even worse.

Professional caregiving services are expensive, and many families prefer to keep their loved ones at home, meaning caregiving duties typically fall to family or friends — most often women. A state law passed in June provides those caregivers additional financial support. Yet resources remain thin.

As the proportion of the U.S. population over age 65 continues to grow, the number of Americans living with Alzheimer’s or dementia is expected to skyrocket, meaning more and more people will shoulder these caregiving duties.

“The stress for those kinds of people is just huge,” said Jeff Weinberg, a Pittsburgh-based caregiver consultant. “They’re totally consumed.”

Caring for a loved one with dementia can be a 24/7 job, said Alison Lynn, a social worker at the Penn Memory Center in Philadelphia. As the disease progresses, caregiving becomes more intensive and hands-on. “That can really take a toll on someone after many years,” Lynn said. “So we have a lot of caregivers that get sick themselves.”

The chronic stress on Alzheimer's caregivers may even shorten their lives by four to eight years, a 2007 study from Ohio State University found. Over 60% of non-professional dementia caregivers in Pennsylvania report having a chronic health condition, and 16% report frequent poor physical health, according to the Alzheimer’s Association.

When she was caring for her father with Alzheimer’s, Doylestown resident Maryanne V. Scott had trouble sleeping and eating. She began experiencing heart palpitations and uncontrollable crying. Eventually, she realized she had caregiver burnout: a state of physical, emotional and mental exhaustion that occurs when caregivers don’t get the help they need. “Of course, you want to care for your loved one,” said Scott, who wrote a memoir recounting the experience. “But then you get to the point where you're like, ‘I need to care for me because I can't go on anymore.’”

Before Lee Marcuzzi’s wife, Joanne Bostjanick, was diagnosed with Alzheimer’s, the couple traveled the world. Their last overseas adventure, in 2015, included stops in Bora Bora, Tahiti and Australia. “But after that, it just went downhill,” Marcuzzi said. For the past four years, Bostjanick has been in hospice care, with workers coming to their home daily to bathe her. A lift device helps Marcuzzi transfer Bostjanick, who can no longer walk and only sometimes remembers who Marcuzzi is, from a wheelchair to a recliner each morning. Marcuzzi pays $50 per night to have workers help her put Bostjanick to bed.

The transition from jet-setting to full-time caregiver has been hard for Marcuzzi, who now rarely leaves their Shaler home. But the hardest part, she said, is watching her wife’s condition decline. “And just kind of mourning the loss while it’s happening,” she said. 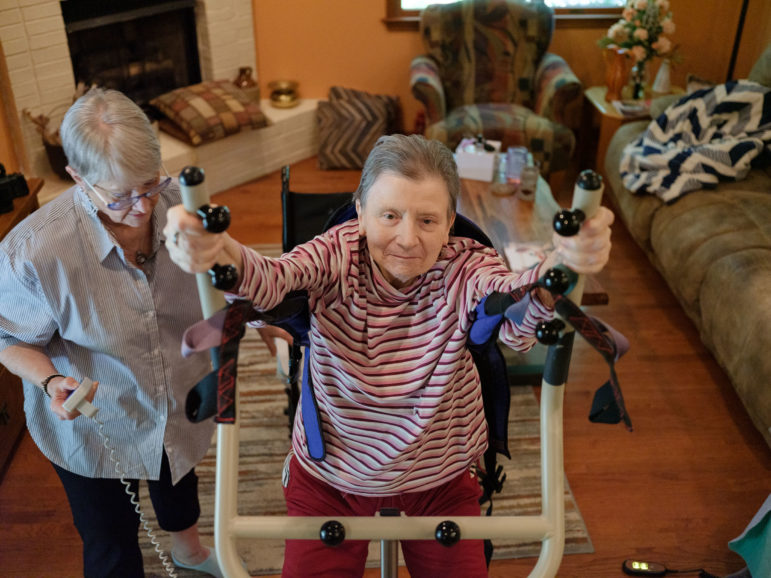 A lift device helps Lee Marcuzzi transfer her wife, Joanne Bostjanick, from a wheelchair to a recliner each morning. Marcuzzi pays $50 per night to have workers help her put Bostjanick to bed. (Photo by Quinn Glabicki)

To combat burnout and isolation, many caregivers turn to support groups. After her husband was diagnosed with Alzheimer’s in February, Cathy M., of Pittsburgh’s North Hills, joined a Facebook support group with over 30,000 members. The group serves as a forum for members to swap advice, vent and, sometimes, share a laugh. Cathy M., who asked that her last name be withheld for privacy reasons, once posted to the group when her husband unwittingly watered their plants with Windex. “You have to laugh,” she later said. “If you don’t laugh, you’re going to cry. And you’re going to cry anyway, so.”

Through it all, caregivers like Marcuzzi and Cathy M. must shoulder more responsibilities as their loved one’s condition worsens. On average, a person with Alzheimer's lives four to eight years after their diagnosis, according to the Alzheimer’s Association. “Not only are they grieving the loss of their spouse, their parents, whoever, as they knew them, they're doing it in this slow, incremental, confusing, very destabilizing and often traumatic way,” said Lynn of the Penn Memory Center.

Lawmakers in Harrisburg are beginning to recognize the urgency in supporting caregivers. Act 20 of 2021, signed into law in June, expanded the state’s Caregiver Support Program by increasing the maximum reimbursement amounts for home modifications and monthly care costs, including hiring interim care. It will help caregivers relieve stress by “encouraging self-care and the use of respite to take a break from their responsibilities and recharge,” Pennsylvania Secretary of Aging Robert Torres said in a written statement to PublicSource and Spotlight PA.

But experts agree that there are still too few caregiver resources, and for middle-class families, out-of-pocket costs can still be prohibitively expensive. 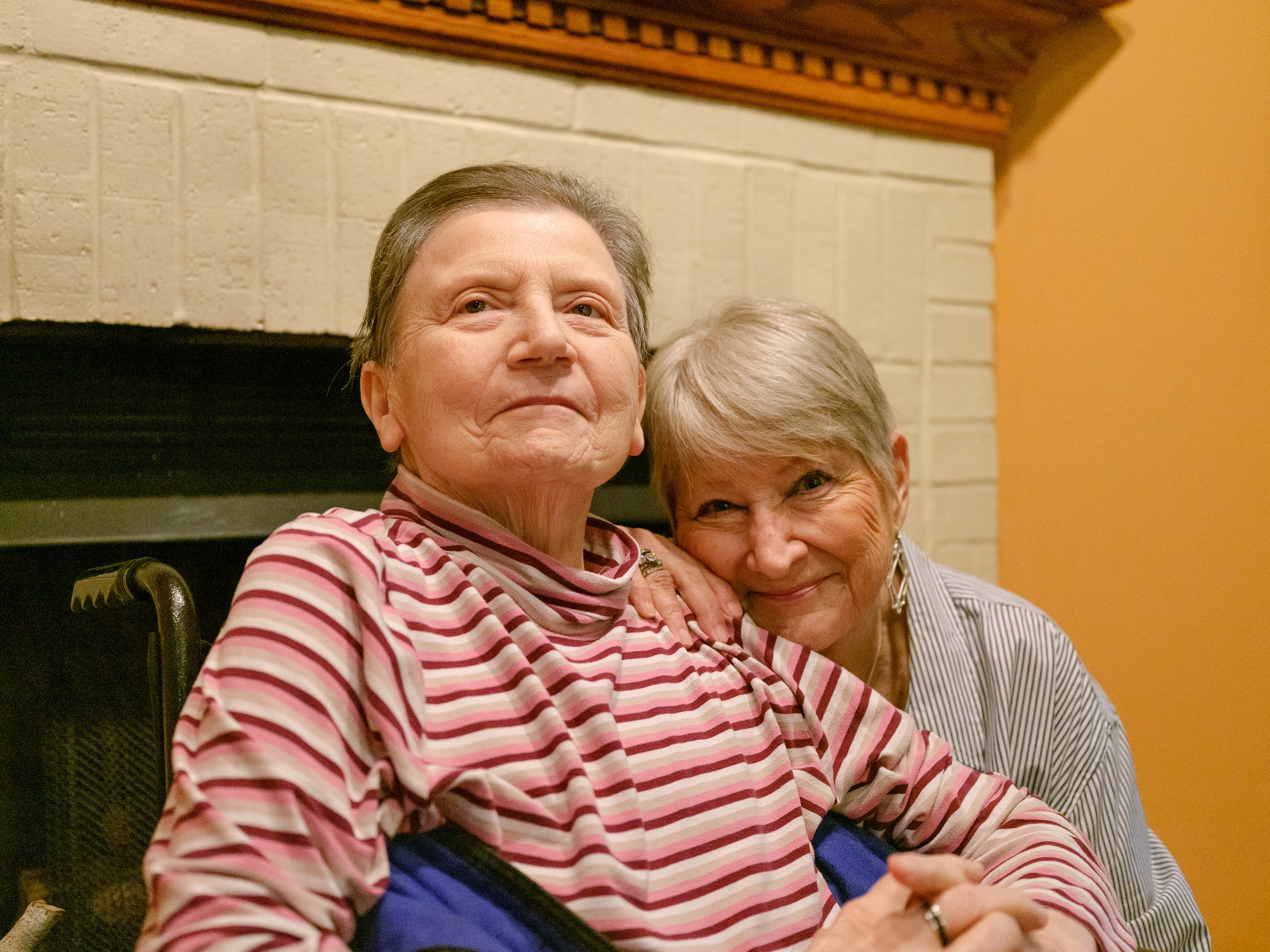 Lee Marcuzzi and Joanne Bostjanick, inside their Shaler home. (Photo by Quinn Glabicki)

When a person with dementia is moved from their home to a care facility, it’s often because the burden on the caregiver has become too overwhelming, not because of how the disease has progressed, said Amy Kowinsky, executive director of Dementia360 in Oakmont. “Caregivers often feel like, ‘I want to be able to do this myself. I don't want to bother my children, they have their own lives. I can do this,’” Kowinsky said. But caregivers need help. “We always say, ‘It takes a village.’ You can’t do this by yourself.”

Dementia360, a private-pay program that is part of Presbyterian SeniorCare Network, works with caregivers to help keep their loved one at home as long as possible. It offers home visits, personalized care plans and virtual group events like yoga. Its care coordinators tip caregivers off to useful products like electronic pets and installable car door handles. And at its dementia-inclusive social outings, called Memory Cafes, wandering between tables or dining sans utensils are welcomed.

Yet Dementia360 isn’t yet covered by insurance, meaning most participants must cover the cost themselves.

The Moon Township-based nonprofit Hope Grows works to support caregivers of all kinds through services like counseling and phone check-ins. Licensed professional counselor Lisa Story founded the organization in 2010 after noticing a lack of support for caregivers. She’s seen many of them struggle with depression, anxiety, post-traumatic stress and loss. “It’s not uncommon for someone to lose their identity in this,” she said.

Last year, the organization supported over 700 families — a 70% increase from 2019. The pandemic both increased the need for support and prompted Hope Grows to offer its services virtually, making them easier to access, Story said. Most participants are from the Pittsburgh region, though some are as far away as North Carolina and Florida.

Kinter, of Murrysville, knows caring for her husband will only grow more challenging. The sundowning may become more frequent, and his memory will likely continue to erode. Still, she said she treasures every day. “Unless God decides to give us a miracle,” she said, “we as caregivers have to plod through.”

Juliette Rihl is a freelance reporter. She can be reached at juliette@publicsource.org.

This story is a collaboration between PublicSource and Spotlight PA, published as part of a Pittsburgh Media Partnership project.