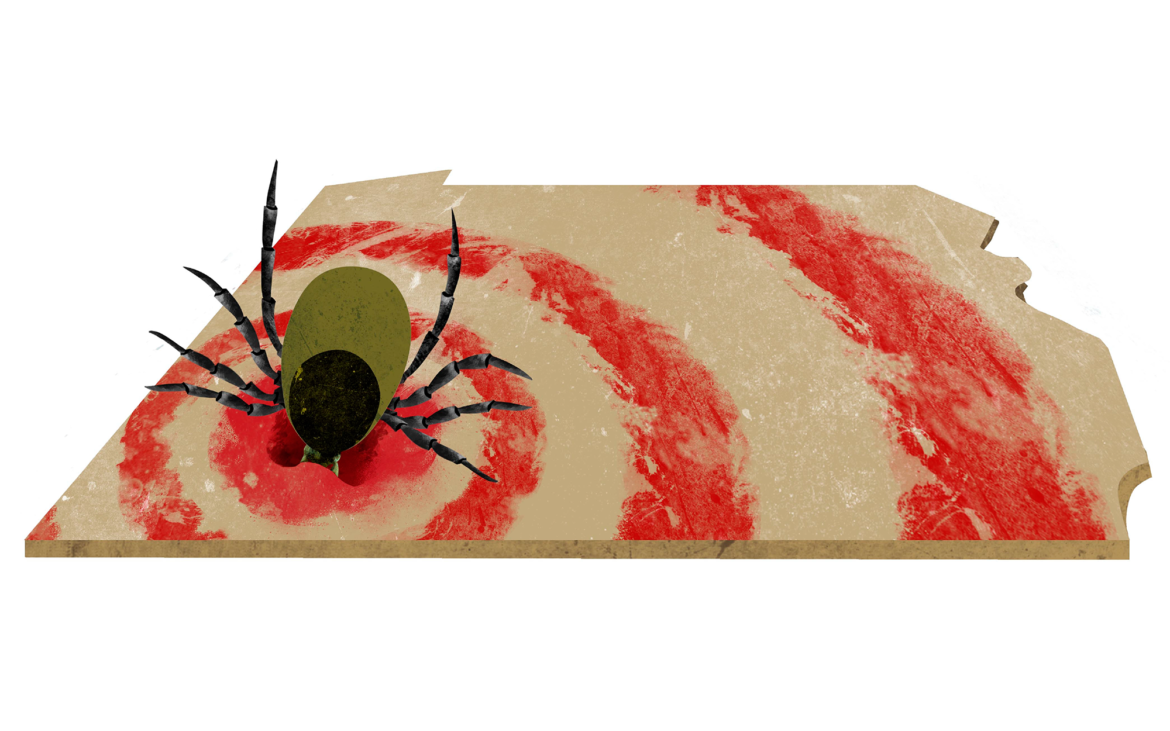 A decade ago, Southwestern Pennsylvania was an area virtually untouched by Lyme disease. But in recent years, the region’s tick population is multiplying rapidly and more and more of them are carrying the bacteria that causes Lyme disease.

By most recent estimates, about 40 percent of deer ticks in the region carry Lyme-causing bacteria. In Allegheny County, there has been a more than a tenfold increase of Lyme disease in the last five years, said Dr. Andrew Nowalk — a Lyme disease specialist and infectious disease researcher at the Children’s Hospital of Pittsburgh.

Climate change and reforestation are expected to intensify the problem as both would create a more ideal habitat for white-footed mice, the primary host of the Lyme-carrying deer tick.

Nowalk is doing his part to raise awareness by sharing literature, producing webcasts and traveling to address doctors in neighboring counties who may be new to Lyme. When caught early, Nowalk said, Lyme disease is easily treatable, but the prognosis can be grim if Lyme is allowed to corkscrew its way into the nervous system, heart and joints.

There are many challenges to identifying Lyme early. Ticks can be tiny, as small as a poppy seed, and their bites can be easily missed. Symptoms of Lyme can masquerade as the flu or other ailments, so it’s easily missed or misdiagnosed. And even if patients do remember a tick bite, they have a less than 5 percent chance of actually contracting Lyme disease, Nowalk said.

Those unlucky few may find themselves in the crossfire of a deep controversy.

At one end of the spectrum, traditional doctors claim Lyme testing is straightforward and a short course of antibiotics wipes out the infection at any stage. At the other end, so-called “Lyme-literate” doctors claim tests are inaccurate and long-term antibiotic treatment is needed. The one point of agreement seems to be that there is no quick and easy fix for chronic Lyme symptoms, which include fatigue, pain, joint swelling and cognitive decline.

When Carnegie Mellon computer science professor Jennifer Mankoff first became sick in 2006, no one in the area suggested she get tested for Lyme disease. Her back ached, and there were times when she couldn't move parts of her body, like her jaw or her arm, without intense pain. She started seeing a massage therapist who nudged her to consider Lyme as the cause. By the time she was diagnosed, Mankoff was noticeably clumsy. Now, a decade later, she feels almost back to normal, but getting to that point was not simple.

“It’s really hard as a patient to navigate all of this,” Mankoff, 43, said. When researching the disease, she said patients have to wade through Lyme support group message boards or rigorous — but also limited — peer-reviewed studies. The advice you find can also be vastly different from doctor to doctor. Jennifer Mankoff, a professor at Carnegie Mellon University's Human-Computer Interaction Institute, became sick in 2006. After being diagnosed with Lyme disease and seeking various treatment options, she says she finally is starting to feel close to normal. (Photo by Ryan Loew/PublicSource)

“We do not have enough knowledge,” Wagner said. “We have a problem that’s expanding and getting more complex, but [if we] use the tools we have today for patients, we can improve their situation, and we need to be investing in future research.”

Wagner said that, prior to contracting Lyme disease, she started a consulting firm for CEOs of Fortune 100 companies. At the height of her illness, she couldn’t even string a sentence together. She stopped working for two years. During this time, Wagner says her children also contracted Lyme, which left her 15-year-old son in need of using a wheelchair.

Today, Wagner is thriving again, which she credits to nutritional adjustments and finding doctors who were willing to perform contentious long-term antibiotic treatment.

Lyme-literate doctors often face litigation, which could result in losing their medical license. She is currently working with PALRN to advocate for the passage of state Senate Bill 100 / House Bill 174 that would expand health insurance coverage for long-term antibiotic treatment and protect prescribing physicians. The bill overwhelmingly passed in the House in May and is now being considered by committees in the Senate.

The progression of Lyme

In the first weeks following a tick bite, most patients exhibit a rash, which may or may not resemble a bullseye, Nowalk said. At this point, the disease is easily treatable with a short course of antibiotics, but cases often go undetected because tick bites can occur in hairy or hidden places on the body, and some people don’t experience overt symptoms, Nowalk said.

For the approximate third of cases that remain untreated past the three-month mark, Nowalk said, patients can develop arthritis, fatigue and dementia, which can be permanent.

Once diagnosed, the standard prescription for advanced Lyme is a month of oral antibiotics. But, even after the pills are gone, 37 percent of patients report lingering symptoms. This condition is known as post-treatment Lyme disease syndrome [PTLDS], and Nowalk says it results from lasting damage done by the infection. Dr. Andrew Nowalk, a Lyme disease specialist at Children's Hospital of Pittsburgh, said he is visiting neighboring counties to raise awareness about Lyme disease. Here, Nowalk poses for a portrait in a hospital lab. (Photo by John Hamilton/PublicSource)

Tulane professor of microbiology and immunology Monica Embers said it’s not so clear. She hypothesized that persistent symptoms after Lyme treatment could reflect not only damage but also surviving bacteria.

“Probably the biggest issue with Lyme disease treatment compared to other infections is that there’s no way to reliably determine that a patient has cleared the infection,” Embers said. “... Because once you treat with antibiotics, [Borrelia] don’t grow in culture.”

In 2012, Embers found that in monkeys with advanced Lyme, some of the bacteria did evade the standard course of antibiotics.

After a six-week intravenous course of antibiotics at UPMC, Mankoff felt no better. She then saw a Lyme-literate doctor in New York who gave her a prescription for 18 months of various oral antibiotics. Combined with healthy lifestyle changes, she started feeling better.

Although one paper combining data from four clinical trials concluded there was a potential benefit of long-term antibiotic treatment over placebo, the paper’s methodology has been criticized.

“I think what we really need is better treatment protocols, not longer ones, but better ones,” Embers said. For her, that means novel drugs and combination therapies.

An ounce of prevention

The best thing, Embers said, would be to eradicate Lyme entirely, such as through a vaccine.

Unfortunately, vaccination represents yet another tainted story in the history of Lyme disease, she said.

Although the Food and Drug Administration approved a Lyme vaccine in 1998, the manufacturer pulled it off the market in 2002 amid a class-action lawsuit and declining sales. People claimed the vaccine was causing symptoms of Lyme disease. Several companies have tried to create a vaccine since, Embers said, but because of the prior Lyme vaccine’s bad reputation they abandoned the cause after determining the market wasn’t there.

A new Lyme vaccine, similar to the one approved in 1998, is in phase I clinical trials.

Although humans have had to wait, a Lyme vaccine for dogs has been on the market for eight years.

Besides vaccination and treatment, diagnosing Lyme is a contentious topic. According to Embers, current blood tests for Lyme — which involve detecting antibodies to Lyme bacteria — yield a 30 to 40 percent false negative rate.

In practice, an early Lyme diagnosis can be made solely on the basis of the rash, Nowalk said, and practitioners are taught to treat patients rather than test them. Testing is much more accurate later in the disease, when antibodies have had the time to develop.

To test positive for Lyme, patients have to undergo a Western Blot, which consists of 10 independent detectors that show up as dark bands at specific molecular weights when positive.

Each band corresponds to an individual piece of the Lyme bacterium, Nowalk said. Taken together, the results are highly specific, but individually, they could mean a variety of things. For instance, one band corresponds to common whiplike flagella and would show up for a urinary tract infection.

Part of the trouble in diagnosing Lyme with Western Blot comes from interpreting this very unusual test, Nowalk said. Doctors don’t encounter it often, and they may not feel confident in their assessment.

In Allegheny County, there has been a more than a tenfold increase of Lyme disease in the last five years.

While Mankoff was fortunate that her Western Blot came back clearly positive for Lyme, her 5-year-old son’s results were ambiguous. He didn’t meet the official diagnostic threshold of five bands, but he did have some.

Jeff Covelli, a 46-year-old pharmacist who helps run a Lyme support group in Moon, said his wife and son both failed to meet the threshold, but were eventually diagnosed with Lyme after much frustration.

For Covelli’s wife, he says it took five months, 13 doctors and more than $35,000 out of pocket to diagnose Lyme as the underlying cause of her neuropathy, fatigue and cardiac disturbances in 2012. The diagnosis led to six months of treatment with a rotating cadre of antibiotics as well as years of diet change and vitamins.

Then, in 2015, just as his wife was getting back on her feet, Covelli’s straight-A college student son suddenly found himself unable to retain information. He developed fatigue, dizziness, head and joint pain, and visual disturbances. Having had experience with Lyme at this point, the diagnosis came faster. Despite a year of multiple antibiotics and dietary adjustments, Covelli’s son is still not well enough to return to school.

Nowalk said he believes it’s time for a paradigm shift in how physicians approach PTLDS.

In the meantime, he sends his patients with persistent symptoms to the UPMC Center for Integrative Medicine. Nowalk said a decade ago he would never have dreamed of referring patients for things like homeopathy or acupuncture — which he views as having no basis in science — but if those methods help people to feel better without causing any harm he’s on board.

“I do think that when it comes to these complex chronic conditions a lot of what contributes to curing has to do with how you structure your life,” Mankoff said. “Lifestyle changes are really, really important.”

Nowalk said he thinks in the future immune modulators — like those currently used to treat arthritis — may prove useful in helping patients with PTLDS get their immune systems back in order.

“Everybody wants that one pill to feel better. There’s not that one pill when you have persistent Lyme symptoms,” Nowalk said. “There’s a lot of things you need to try and there’s no easy answer.”

Erin Hare is a Pittsburgh-based freelance writer with a Ph.D. in neuroscience. She can be reached at erin@erinhare.com or you can follow her @ErinHarePhD.