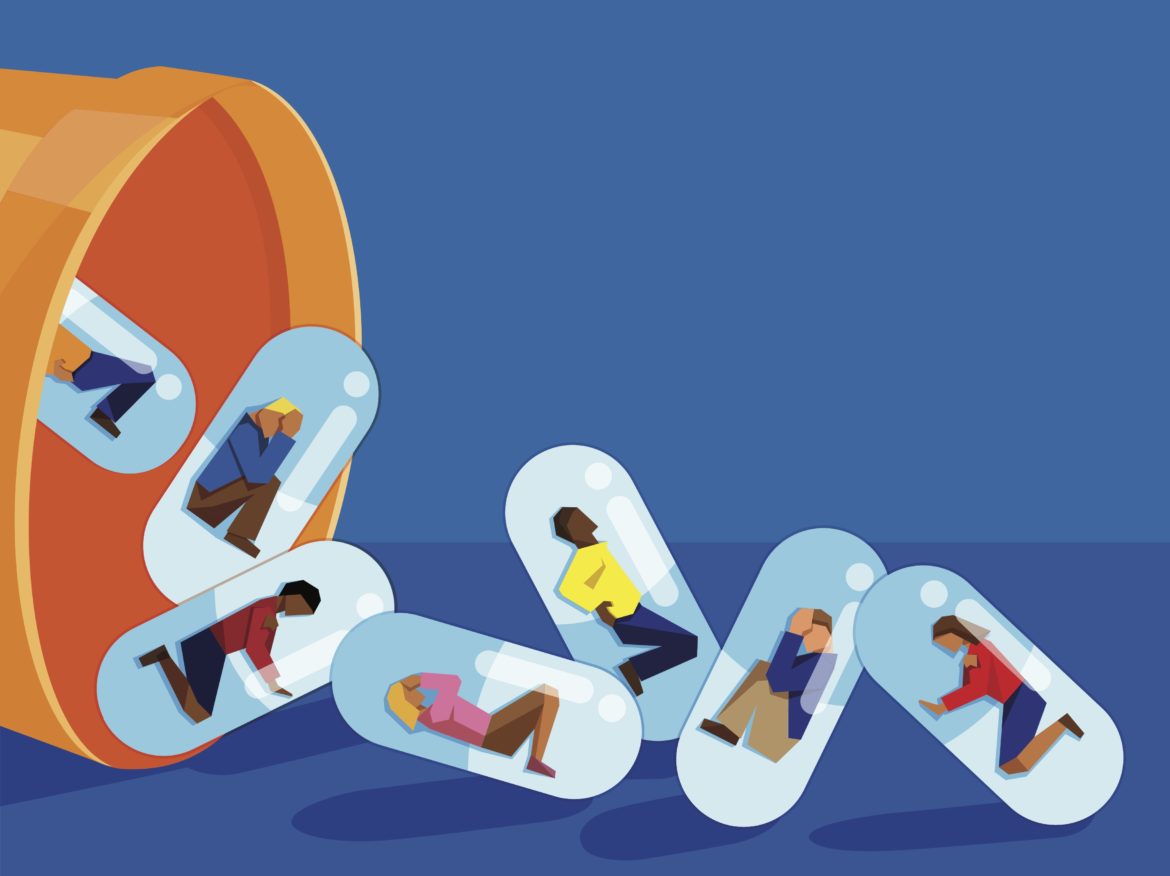 The number of Allegheny County residents dying of opioid overdoses is rising again, after a drop of 40% in 2018 had many health experts hoping the tide of the epidemic had turned.

And the epidemic may only be getting worse in 2020, according to overdose data provided by the city of Pittsburgh, the county health department and the nonprofit Prevention Point Pittsburgh.

Although there isn’t complete data on how many have died so far in 2020, when all these sources of data are moving in the same direction, it typically means the number of deaths will increase as well, said Stuart Fisk, the director for inclusion health at the Allegheny Health Network.

"What we see in hospitals and emergency rooms, and what Prevention Point sees in the streets and what EMS sees with their calls,” he said. "generally trend with final data.”

In June 2019, County Executive Rich Fitzgerald touted the county’s success at reversing what was considered at the time the county’s largest health crisis. "While we have a lot more work to do, the 41% reduction in deaths reflects that we are moving in the right direction,” Fitzgerald said in a press statement.

Health experts in the Pittsburgh region say the county will have to find new tactics to get the epidemic under control, at the same time that it’s struggling to tackle new waves of COVID-19 infections. Alice Bell, a project coordinator at Prevention Point Pittsburgh, worries that COVID-19 could make the opioid epidemic even more deadly this year, since many people have been isolating themselves.

“If you are by yourself, there’s no one there to do rescue breathing, call 911 or give you naloxone,” she said.

Is COVID-19 making it worse?

It’s not clear yet if COVID-19 is contributing to the number of overdoses in recent months or if it’s just a continuation of the rise in overdoses that was already underway.

Restrictions were lifted during the pandemic on prescribing drugs like methadone that can help people cope with their addictions but not everyone took advantage of it. ”There were methadone programs that continued to require people come in and prescribers who didn’t make use of telemedicine and said they still had to come in,” Bell said.

She doesn’t think the presence of fentanyl can totally explain it anymore either. Prevention Point started giving out strips that could test whether fentanyl is present in their drugs, she said.  “Initially people were really interested but now people are saying everything has it,” she said. "And the test strips don’t tell you how much.”

Laura Drogowski, the critical communities manager at the City of Pittsburgh, said there wasn’t evidence that COVID-19 or any government response is causing the recent increase. The city’s recent spike in new overdoses started in February, before the pandemic, she said.

"We want to understand why this increase is occurring and what those factors are so we can address them,” she said. "Strictly attributing it to COVID prevents us from understanding what’s causing this increase.”

Fisk said that at first during the pandemic few people were going to the hospital for overdoses but now overdose patients are showing up again.

"I don’t think there was a big drop in opioid use or heroin use. I think people were just staying away,” he said. "So the question is: what was happening to people who were overdosing?”

Two diseases at once

The Allegheny County Health Department received a grant from the Centers for Disease Control and Prevention last September for $15 million over three years to help tackle the opioid epidemic.

(Four days after the initial publication of this story and the first business day afterward, the Health Department announced it was opening up applications for up to 10 grants between $40,000 to $150,000 to be funded by the money it received from the CDC. The grants will be awarded in September for projects that use data to help prevent overdoses and connect people with treatment.)

The grant money is supposed to help the county manage its opioid data but, thus far, the datasets that the City of Pittsburgh and the county health department provided PublicSource didn’t match. The city recorded more overdoses than the county during certain months, which is impossible since the city is located within the county. As of Tuesday evening, it wasn’t clear what the discrepancy between their collection methods is.

The county’s resources are currently tied up in fighting COVID-19. Ryan Scarpino, a spokesperson for the health department, said there wasn’t yet a timetable for when the county would release a new dashboard it has been building to better track the opioid health epidemic.

The number of COVID-19 cases has also been spiking in the last two weeks and Amie Downs, a spokesperson for the county, forwarded questions to the health department for this story. "I have forwarded on,” she wrote. "As you might imagine, the focus right now is on COVID-related items."

Although the opioid epidemic and the coronavirus virus pandemic are not comparable given the coronavirus is an infectious disease, COVID-19 has proven nearly as deadly as the opioid crisis at its peak. In 2017, during the height of overdoses locally, the county averaged 180 overdose deaths every three months. As of Wednesday, July 1, at least 187 Allegheny County residents have died of COVID-19 since March.

Not all of Southwestern Pennsylvania is seeing the same increases in overdose deaths. In 2019, only half of the region’s 10 counties showed an increase in overdose deaths, including Beaver, Butler, Greene and Indiana, according to data from Overdose Free PA. But five others—Washington, Fayette, Westmoreland, Armstrong, and Lawrence—saw their overdose deaths drop.

While Allegheny County saw a 15% increase last year, overdose deaths increased by around 3% for the United States as a whole, according to provisional data from the Center for Disease Control and Prevention. But the number of overdose deaths reported nationwide so far in 2020 has been increasing. A recent White House drug policy analysis showed that fatal overdoses increased 11% during the first four months of the year compared to 2019, according to a report in Politico, including a 25% estimated increase in overdose deaths in Kentucky and 50% increase in EMS overdose calls in West Virginia.

County health experts who hoped that their previous efforts were containing the epidemic may have to go back to the drawing board. For example, the health department’s previous director, Karen Hacker, attributed part of the drop in deaths in 2018 to the widespread availability of naloxone, a drug that counteracts overdoses. But it’s not clear if the supply of naloxone has increased, fallen or stayed the same, Bell said.

The problem with illegal opioids, Bell said, is people don’t know exactly what they are taking. She said public health officials in the country should follow the lead of Canada, which has stopped restricting the supply of legal opioids.

"It’s ridiculous at this point, with record overdose deaths, that we're trying to reduce prescription opioids,” she said. "There was a problem with opioids being prescribed but we’ve corrected course on that.”

Instead, she said, our efforts should be focused on addressing “[t]he real reasons, the underlying reasons—poverty, racism, inequality, oppression—all those things that cause people to feel they need to kill pain on a daily basis."

If the county had more accurate, real-time data, Fisk said, his staff could intervene more effectively. Reaching people right after an overdose is really important, to prevent them from overdosing again and to take advantage of the opportunity to get them into treatment, he said.

“So people who walk away from EMS, maybe now we know what their name is and how to reach out to them—maybe not through police but outreach channels and trusted people in the community to find out what help they want and what help we can provide them."

Fisk said, even if they don’t die,any patients face severe health problems for the rest of their lives. "That’s the untold story,” he said.

Some patients suffer brain damage from a lack of oxygen after an overdose, he said, while others will get deep tissue infections and heart infections.

"We see 23 and 24-year-olds, who have had three heart valve replacements,” he said. “So we’re seeing very young people with heart failure and significant disability that will be that way the rest of their lives even if they quit using.”