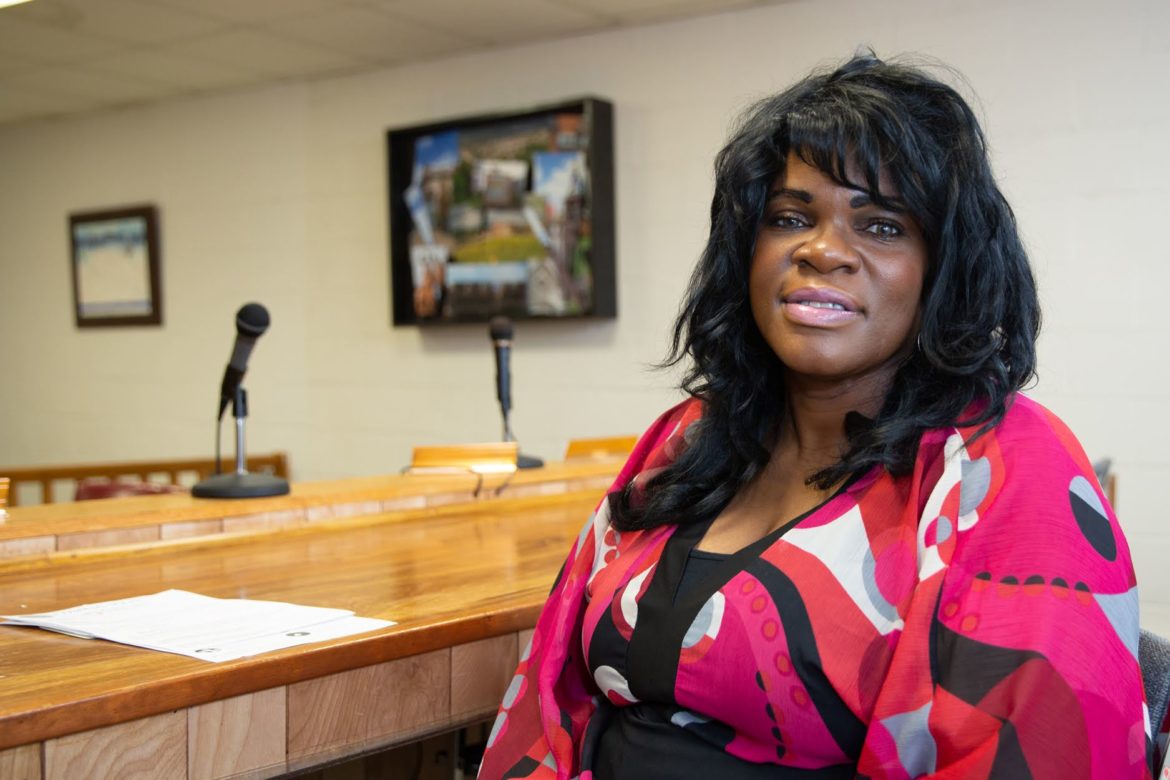 It's been more than 30 years since the state implemented Act 47 to help financially distressed communities, and it's still a big player in the lives of people in towns across Pennsylvania.

It seems that the legacy left by the decline of the steel industry and state-mandated spending restrictions that were put in place to aid them through tough financial times are, in part, behind the struggles to boost the wages of police officers in some Southwestern Pennsylvania municipalities.

By the mid-1980s, about 100,000 manufacturing workers in the Pittsburgh region lost their jobs. The towns that were home to the shuttered factories faced diminished property and sales tax revenue. In response, then-state Rep. David Sweet introduced the Municipalities Financial Recovery Act, known as Act 47.

Act 47 designees are assigned a coordinator and adopt a restrictive spending plan in exchange for the capability to raise earned income taxes and favored status on state grant applications. Oversight restrictions vary, but one consequence of Act 47 is that some cannot afford the salary and benefit expenses of a full-time police force because of the act’s spending restrictions.

Since the state established Act 47 oversight in 1987, 31 municipalities have come under Act 47; 17 remain under Act 47 today, including three municipalities on the outskirts of Pittsburgh that have had the designation for nearly three decades: Braddock, Duquesne and Rankin.

See a list of active and resolved Act 47 municipalities

Sweet said it was never his or other legislators’ intention for municipalities to stay under Act 47 for decades. “We were hopeful that these tools ... and a restructured economic environment would allow communities to recover,” he said.

“I suppose we were naïve. I believe we were thinking more in terms of four or five years, not a longer period of time. History has shown us that the challenges are probably greater than we understood.”

In 2014, the law was amended to impose a five-year time limit for a municipality to remain under Act 47 with an option for a coordinator to ask for a one-time three-year extension.

“The concern of the cost of maintaining a full-time police goes beyond wage cost alone,” said George Dougherty, Braddock’s Act 47 state-appointed coordinator. “With full-time police officers you must maintain full-time benefits, like health care, but you also must consider legacy costs such as retirement benefits as well. ...While we prefer to pay full-time benefits and it is better for the officers, it ramps up the cost for the citizens quite a bit.“

Braddock has been under Act 47 for 30 years. Its department only has part-time officers. They start at $11.80 an hour. The acting chief makes about $18 an hour.

Residents voted last year to form a committee to consider adopting a home rule charter; its current governance structure aligns with Allegheny County Borough Code. This move could be a step to ending Act 47 financial oversight. Adopting a charter allows municipalities to set their own policies, provided they comply with state law. Though home rule does not necessarily replace Act 47 oversight, it gives a community emerging from distressed status the flexibility to establish a tax structure that meets its revenue needs despite no longer being able to levy the higher earned income tax allowed by Act 47.

If Braddock does adopt home rule, council president Tina Doose is considering an increase in the property tax rate to better take advantage of what she sees as the borough’s greatest resource — its real estate. “So in working on tearing down abandoned blighted properties, it makes way for development,” Doose said. “There is not a week that goes by that I don’t get a contact from a business or individual looking to be in Braddock.” 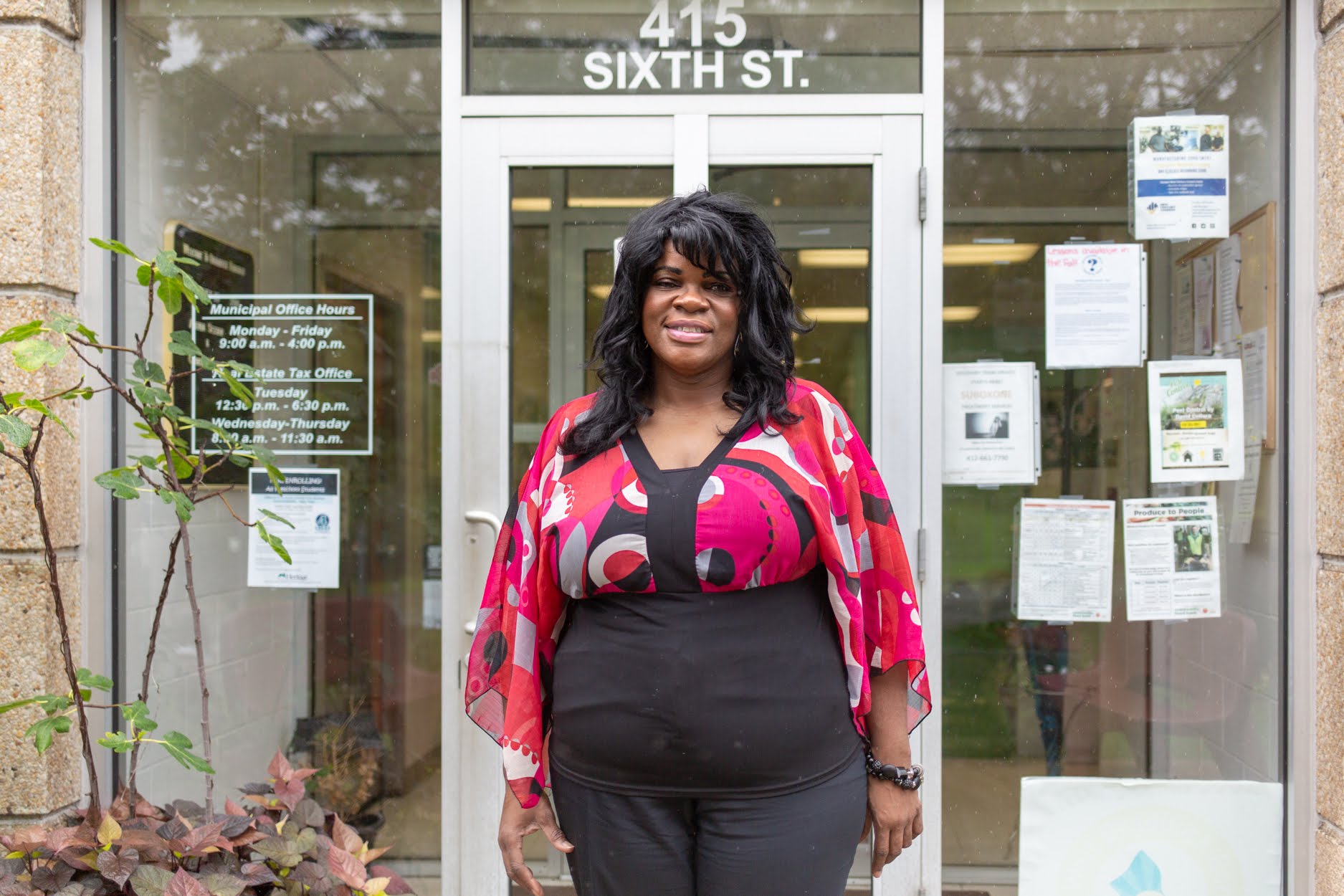 Braddock Borough Council president Tina Doose stands in front of the Braddock Borough municipal building. She recalls joining the board 13 years ago and wanting to get Braddock out of Act 47. "You think something that says distressed and financial distress is good, and it wasn’t to me," Doose said. (Photo by John Altdorfer/PublicSource)

Doose joined Braddock’s council 13 years ago and, at her first meeting, joined the finance committee. At the meeting, she recalls saying she wanted to put measures in place to move the borough out of Act 47. Doose did not realize at the time that the finance committee had no intention of helping the borough leave Act 47. Doose was the only member of council younger than 70 and she said her colleagues thought of Act 47 as “the best thing since sliced bread.”

"You think something that says distressed and financial distress is good, and it wasn’t to me," Doose said.

Even if Braddock emerges from Act 47 in the future, she said it still would not be able to afford a full-time police force. The borough has a budget of under $1.8 million. The 12-officer police department already costs about $418,000.

Doose said Braddock’s council has never considered dissolving its police department. She said she would consider merging with neighboring departments if that would benefit residents, but she doesn’t see it happening in the near future.

“Basically, I beg for pennies,” said Carl Bailey, secretary-treasurer and principal officer of Teamsters Local 205, a union that represents police departments of Act 47 municipalities including Braddock, Rankin and Duquesne.

“If I were to go to arbitration and the arbitrator gives me anything that exceeds the recovery plan [limits], then they just go to court and get my arbitration thrown out. I have believed for years that several communities hide behind that arbitration fact.” 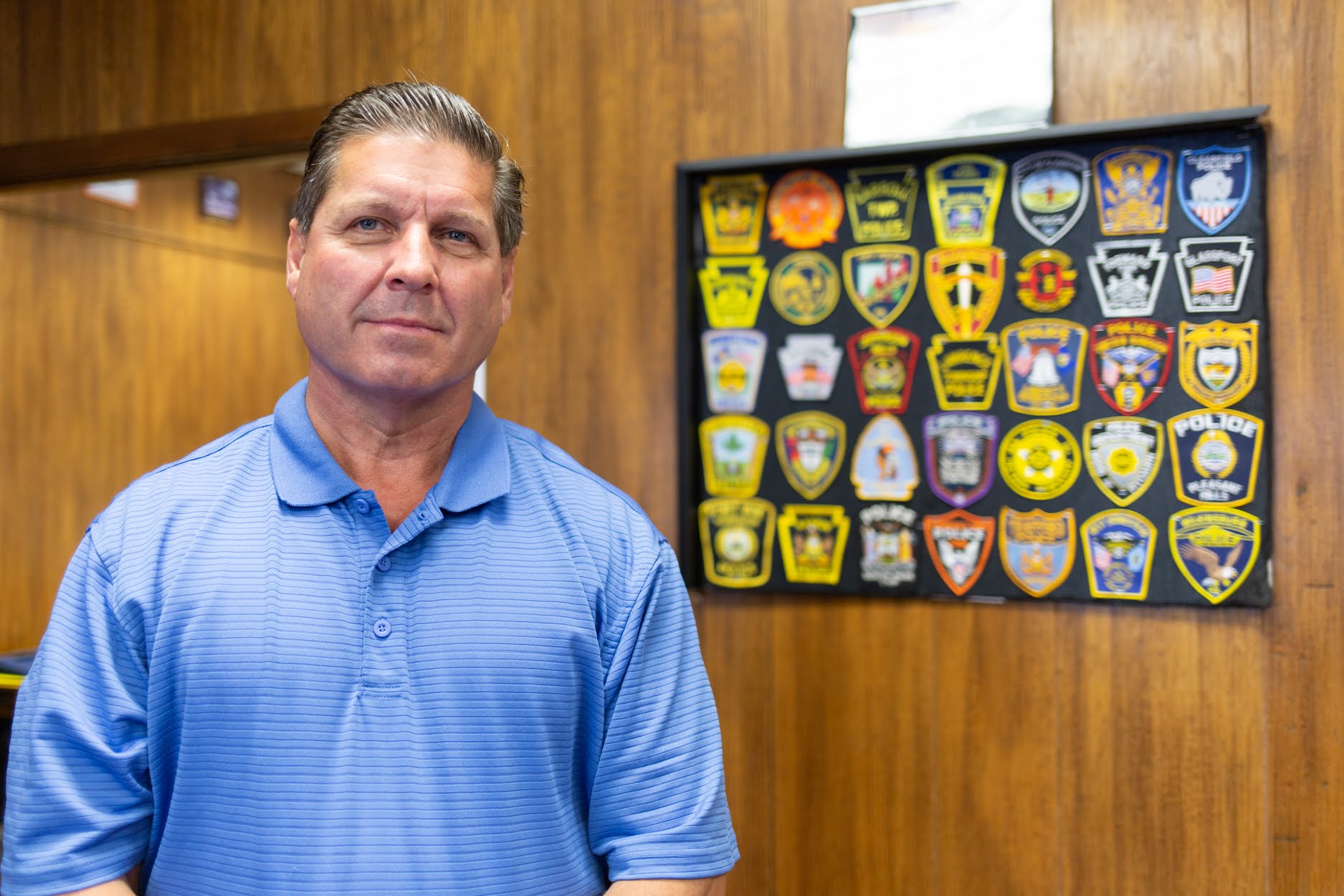 Carl Bailey, secretary-treasurer and principal officer of Teamsters Local 205, stands in his White Oak office in front of a collection of emblems representing some of the local police forces represented by the union. (Photo by John Altdorfer/PublicSource)

Dougherty said that in the last round of negotiations between the borough and the union, the borough boosted wages for beginning officers in an effort to prevent turnover. “Our goal,” he said, "is that at the end of the three years we will at least be at the average [wage] so that our young officers will be making the average [of] other part-time departments."

Farther south, Clairton was one of the first municipalities in the state under Act 47. Clairton had previously dissolved its police force in 1985. The city was unable to meet its payroll or pension obligations and relied on state police to cover the city for seven years.

Clairton Mayor Richard Lattanzi said state police “did the best they could but their barracks, their home base, was probably a half-hour or 20 minutes away. [They] would come here and work an eight-hour shift, then 15 to 20 minutes before a shift would end they would leave and then another state trooper would have to drive back here again.

“We had to do some juggling around the schedules to make sure we weren’t caught [without police on site]. It wasn’t the same as having the officers here at your city building.”

Since returning to a municipal force in 1992, Lattanzi said crime in Clairton has gone down. “Over the last 10 to 15 years, there has been a vast improvement involving crime,” Lattanzi said. “We still have basically a poor community with small thefts...some small drug activity but the violent crime went down significantly.”

But a municipality can be declared financially solvent by the state and still financially struggle. East Pittsburgh, which emerged from Act 47 in 1999, has only six part-time officers; their starting pay is $13 an hour. Only its chief is working full time.

Thinking back to when the Legislature implemented Act 47, Sweet said he did not foresee the difficulties that municipalities in Act 47 or emerging from it would have in operating police departments. He imagined that more communities would adopt regional forces as some Pennsylvania municipalities have done. But, he said, cornering municipalities into part-time policing “was not what the goal was by any stretch of the imagination.”

Nichole Faina is a freelance journalist in Pittsburgh. She can be reached at n.faina.writer@gmail.com.

This story was fact-checked by Ross Holub.