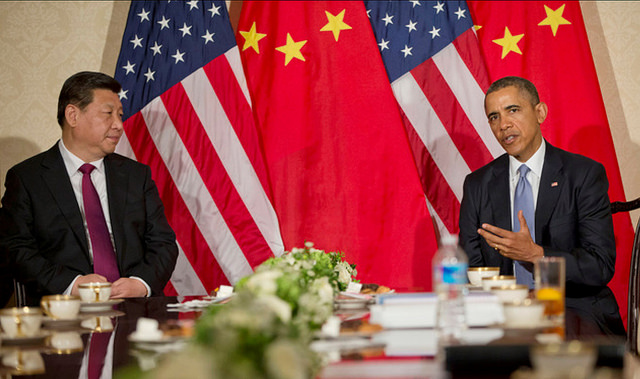 This is a big freaking deal when it comes to the global fight against climate change.

In a surprise announcement Wednesday, the planet’s two top carbon polluters pledged to unite on fighting climate change by agreeing to partner closely on several initiatives—including a pledge from President Barack Obama that the United States will move much more quickly to lower carbon pollution levels.

Combined, the U.S. and China are responsible for more than one-third of the world’s greenhouse gas emissions.

The announcement was made after Obama and Chinese President Xi Jinping met at a summit in Beijing and “includes headline-grabbing commitments from both countries that are sure to breathe new life into negotiations to reach a new climate treaty in Paris next year,” according to Climate Desk.

"This is a major milestone in the U.S.-China relationship," Obama said in Beijing, according to an Associated Press article. "It shows what's possible when we work together on an urgent global challenge."

The U.S. pledged to reduce carbon emissions 26 to 28 percent below 2005 levels by 2025. That’s a major increase from a goal Obama set earlier in his presidency, when he said the U.S. would cut emissions 17 percent by 2020. (Obama’s climate goals are expected to meet harsh opposition from ascending Republicans in Congress.)

For the first time, China has set a date when it thinks its emissions will peak, around 2030, and then decrease.

The White House said in a statement that China could reach the target even sooner than 2030. It "expects that China will succeed in peaking its emissions before 2030 based on its broad economic reform program, plans to address air pollution, and implementation of President Xi's call for an energy revolution."

To achieve its goal, China said it will increase the share of energy it gets from non-fossil fuel sources to around 20 percent by 2030.

From a White House press release on the new plan:

It will require China to deploy an additional 800-1,000 gigawatts of nuclear, wind, solar and other zero emission generation capacity by 2030 – more than all the coal-fired power plants that exist in China today and close to total current electricity generation capacity in the United States.

The plan does not entail using the U.S. Environmental Protection Agency's authority to regulate greenhouse gases, as the bulk of Obama's existing climate strategy does. Instead, it involves a series of initiatives to be undertaken in partnership between the two countries, including:

"This is, in my view, the most important bilateral climate announcement ever," said David Sandalow, formerly a top environmental official at the White House and the Energy Department. "It sends the signal the two largest emitters in the world are working together to address this problem."

Read more about the plan on The White House website.