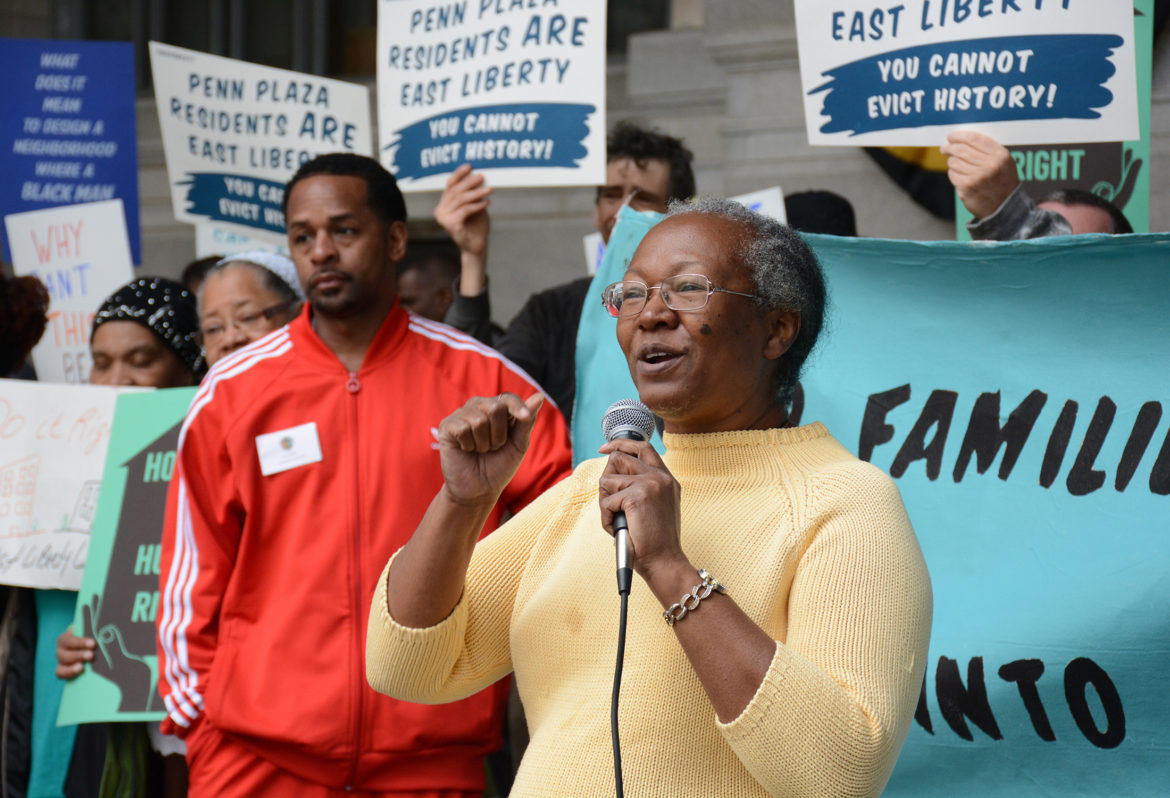 Alethea Sims, 61, speaks outside the City-County Building on Tuesday during a protest against the owners of Penn Plaza, LG Realty. Sims was displaced from her home in East Liberty by development in the early 2000s and has been fighting for affordable housing and against gentrification ever since. (Photo by Stephen Caruso/PublicSource)

Randall Taylor thinks Pittsburgh has a problem — a development problem.

Seeing tax burdens growing for seniors and people losing their homes in Lawrenceville, South Side and East Liberty — which are often deemed hot, up-and-coming neighborhoods — Taylor notices a pattern in Pittsburgh's growth.

“They’re leaving behind those who built those very neighborhoods,” said Taylor, a 50-year-old who was forced out of his Penn Plaza apartment in East Liberty a year ago.

Taylor was one of the organizers of a protest attended by about 80 people on the steps of the City-County Building downtown Tuesday afternoon to protest the continued development of the Penn Plaza apartments site and the gentrification it represents.

However, LG affiliate Pennley Park South is now suing the commission to overturn the result, and has allegedly continued construction in spite of the commission's decision. LG argues that it did not receive advanced warning of the commission’s decision, and, therefore, it does not apply. The city denies that allegation, stating that it provided the rejection within the legal time period. Ten activists groups were represented at the event, including the Hill District Consensus Group and Pittsburghers for Public Transit. (Photo by Stephen Caruso/PublicSource)

Recently, the remaining residents of Penn Plaza have complained of no heat, revolting smells and noise through the evenings as construction continues.

LG spokesperson Jonathan Kamin could not be reached for comment.

The rally was held immediately after a meeting between five Penn Plaza residents with the city solicitor’s office, requesting a cease-and-desist order on LG’s construction. According to Helen Gerhardt, a member of the activist group Homes for All and a speaker at the protest, at least 16 residents still live in Penn Plaza.

One of those residents is 79-year-old Mabel Duffy. She has lived in East Liberty for 57 years, nine of which were spent living in Penn Plaza.

“We’re living in conditions that aren’t suitable for human beings to be involved in,” Duffy said.

Alethea Sims has been a member of the Coalition of Organized Residents of East Liberty since its founding in the early 2000s. The organization was meant to protect residents rights after, similarly to the situation at Penn Plaza, Sims and fellow residents were evicted from their homes in the East Liberty Towers to make way for development.

Sims is one of the lucky few from the towers who, following a lawsuit against the city’s Urban Redevelopment Authority, managed to stay in the neighborhood. But most of her old neighbors weren’t as lucky.

“They’re leaving behind those who built those very neighborhoods.”

“What happen to us...shouldn’t happen,” Sims said at the protest. Instead, she and her fellow organizers want developers to relocate residents before construction starts. If they refuse, the organizers say developers shouldn’t receive public money.

While he did not speak at the event, Democratic mayoral candidate Rev. John Welch showed up at the event to express his support. Welch attacked Mayor Bill Peduto’s recent executive orders on affordable housing for passing policy without a means for funding.

As a nonprofit, UPMC, Pittsburgh’s largest employer, doesn't have to pay $42 million in property taxes to Allegheny County, according to a 2012 Pittsburgh Post-Gazette article.

Peduto dropped a lawsuit against UPMC in 2014 that sought to strip the hospital system’s tax-exempt status and apply payroll taxes.

As the protest disbanded, looking over the crowd, Taylor sounded confident in the future of their affordable housing fight:

“To our dear mayor and city council, we got a lot of people out here. And this is only the beginning.”