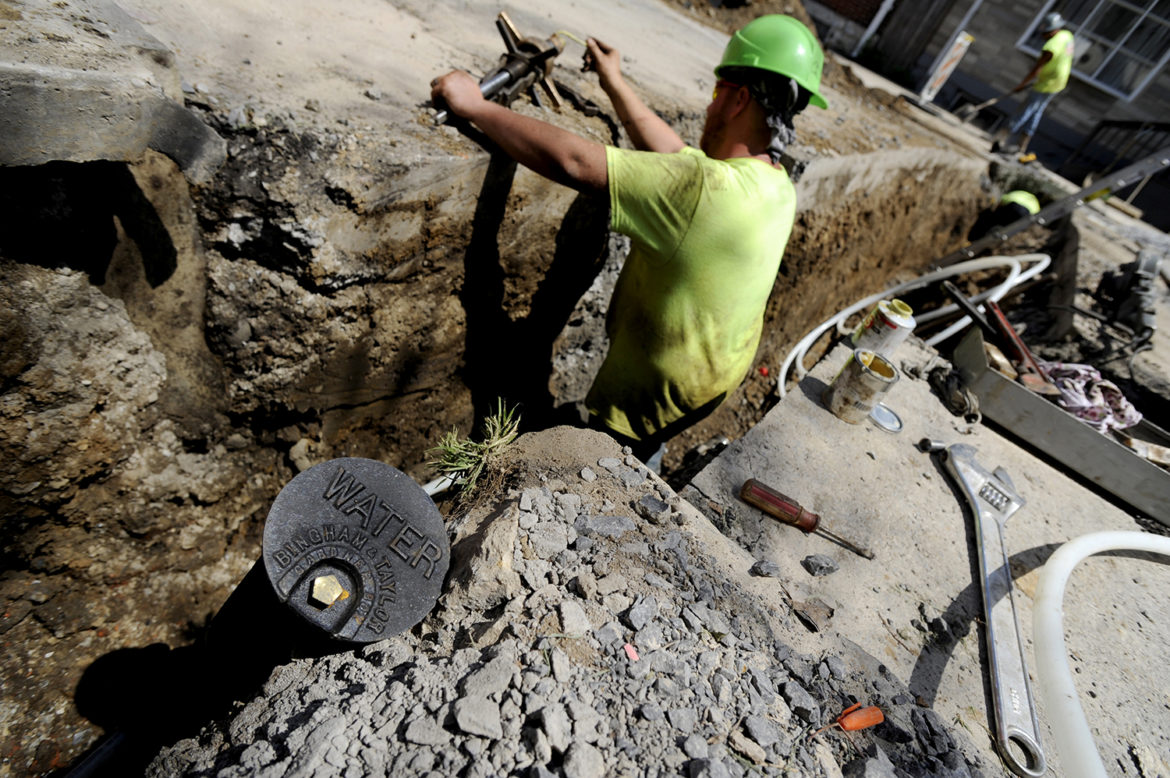 When Squirrel Hill resident Michael Coblenz tested the water flowing from the faucets in his home for lead, one result exceeded a federal limit by more than four times.

With his 3-year-old daughter in mind, the Carnegie Mellon Ph.D. student spent $4,500 to replace the lead lines that deliver water to his 1935 home. Filters can mitigate lead levels in water, but he opted to play it safe because children are especially vulnerable to the neurotoxin.

The Pittsburgh Water and Sewer Authority [PWSA] now must devise a plan of its own to replace lead service lines connecting to some city homes with plastic pipes. First, they need to figure out which of its underground lines are made of lead.

A recent round of routine state-mandated testing revealed the water in 17 of the 100 Pittsburgh homes tested had a lead level exceeding the Environmental Protection Agency’s action level of 15 parts per billion. When 10 percent of homes test above that level, it triggers regulatory action.

Under orders from the state Department of Environmental Protection [DEP], which enforces the regulations, the PWSA must begin replacing 7 percent of the lead lines per year. At this point, it’s unclear how much the work will cost or from where that money will come. Raising rates for PWSA customers to pay for the work has not been ruled out, and it’s how the agency says it has paid for capital improvements in the past.

DEP’s mandate to PWSA is an unfunded one.

“I hope that our bringing attention to this, not only before the exceedance occurred but now that it has occurred, will interest both public and private funders in this issue,” said PWSA Interim Executive Director David Donahoe.

Homeowners whose water lines will be targeted in the replacement program won’t be required to replace the rest of the lines that run to their homes. But if they want to, they’ll have to pay — and they may really want to after learning this:

A job only partially completed could actually exacerbate the problem, at least at first, because the construction can disrupt lead particles in the remaining parts of the pipes.

“Without the commitment of the community to replace the homeowner portion of that, the lead risk and the lead exposure can be worse than if the city did nothing at all,” said Joe Grande, water quality manager for the water utility in Madison, Wisconsin — a city that replaced all of its lead water service lines and passed an ordinance compelling its residents to do the same.

Although PWSA and the city of Pittsburgh will encourage residents to do so, the city has not required individual property owners to replace the lead pipes they own, nor has it shared a plan to help them pay for the work, like some other cities have done.

PWSA tested 100 homes known to have service lines or internal pipes made of lead or with lead solder earlier this year. The results were reported July 12.

In Pittsburgh, more than 10 percent of the tested homes had a lead level above 22 ppb.

Lead levels in the samples have been steadily climbing since 2007. In 2013, the test results returned at 14.8 ppb, just shy of the limit. The Pittsburgh Water and Sewer Authority started replacing some lead water lines in Lawrenceville before high lead levels were detected through routine state-mandated testing. Those results triggered regulatory action that mandated the replacement of 7 percent of the city's lead pipes per year. (Photo by Connor Mulvaney/PublicSource)

PWSA had already launched a pilot project in Lawrenceville partly in response to voluntary lead tests — like the one Coblenz and hundreds of others did — that further suggested Pittsburgh has a lead problem.

In addition to replacing some city-owned lines there, its employees also began educating homeowners (which is now required under DEP orders) and is giving them the option to have lines replaced when the authority has already dug trenches and will rebury them.

“This is the least expensive time for the customer to do service lines replacement,” Donahoe said.

Meanwhile, to figure out where the lead lines are, the authority is “sloughing through” paper records it inherited from the city, which used to run the water system. They’re supposed to meet the first 7 percent replacement mark by July 1, 2017, said Lisa Daniels, director of the DEP’s Bureau of Safe Drinking Water.

In a voluntary effort to replace lead lines, Madison spent more than $15 million between 2000 and 2011 as it switched out about 6,200 lead service lines with copper ones. In Madison, as in Pittsburgh, the city water authority owns the lead lines that run from the service main under the street to the curb, and property owners are responsible for the portion that stretches from the curb to their homes.

It was a conundrum that Madison solved by passing an ordinance requiring property owners to replace the pipes they owned, with the city reimbursing them for half of the cost up to $1,000.

The typical reimbursement was $670, Grande said, and the cost was covered by rent paid by cell phone carriers for space to place antennas on its water towers. It also offered a need-based plan for property owners to pay their expenses off over about five years at a 2 to 3 percent interest rate.

Are you concerned about lead in your drinking water? Click here.

Since 2004, the Lansing Board of Water & Light in Lansing, Michigan, has been voluntarily and systematically replacing its lead water lines with copper ones. So far, the city has removed about 13,500 of its original 14,000 lead lines at a cost of about $42 million, communications coordinator Amy Adamy said.

The major difference between Pittsburgh and Lansing is that Lansing owns all of the lead service lines, even the portions underneath customers’ yards. The Lansing agency services about 55,000 customers; PWSA has about 83,000 customers.

Adamy said it costs the utility about $2,000 to replace a line, down from about $3,100 in the beginning, because it has devised a method of replacing the lines without digging up a yard.

In Pittsburgh, Donahoe said the cost for a customer can vary dramatically depending on the size of the yard and the length of the line. In Lawrenceville, projects at homes that have little or no front yards may cost several hundred dollars. Prices can catapult into the thousands as yard sizes grow.

In Madison, some homeowners resisted the mandate to replace their lead lines, many insisting they’d lived in a home for decades and never had a problem.

“Lead is not a contaminant that you can taste, smell or see,” Grande said. “So the perception was and has been that as long as the water looks good, tastes good and smells good, it can’t possibly be harmful to you.”

But because lead does have a litany of associated health risks, Madison prioritized three areas: schools and daycare facilities, multi-family homes and areas with known high concentrations of lead pipes.

Dr. Karen Hacker of the Allegheny County Health Department stressed that most of the lead issues in Pittsburgh originate from paint chips or dust in Pittsburgh’s older housing stock. But the learning difficulties it can cause in children and memory loss and high blood pressure in adults — among many other symptoms — are identical no matter the source.

Major contributors to lead exposure and who’s most at risk

The DEP detected lead levels of less than 1 ppb when it tested water leaving the PWSA plant on its way to the distribution system in April. This supports the working conclusion that the lead is leaching into water from buried pipes.

Also in April, the DEP cited PWSA for switching which corrosion control chemical it was using without alerting the agency.

There’s no evidence that this change from soda ash to caustic soda and back again exacerbated the lead problem in the city, but because the DEP didn’t have the opportunity to do baseline testing, neither entity can be certain of that, Daniels said. PWSA is working on a report about corrosion control to determine the effects, if any, she said.

Pittsburgh has to test its water every six months now because of the chemical switch snafu as well as the lead level exceedance, instead of every three years as it had before. Six months is the accepted testing timeframe to ensure corrosion control chemicals are working.

If PWSA reduces its levels to below the EPA action level for two consecutive six-month periods, it will be permitted to cease the replacement project, Daniels said.

Donahoe said PWSA likely won’t abandon replacement projects entirely if that’s the case — before it was required to, it already took them on voluntarily.

He emphasized the fact that just 17 of the 100 homes tested this year exceeded the action level. “So that tells you that this isn’t systemwide,” he said.