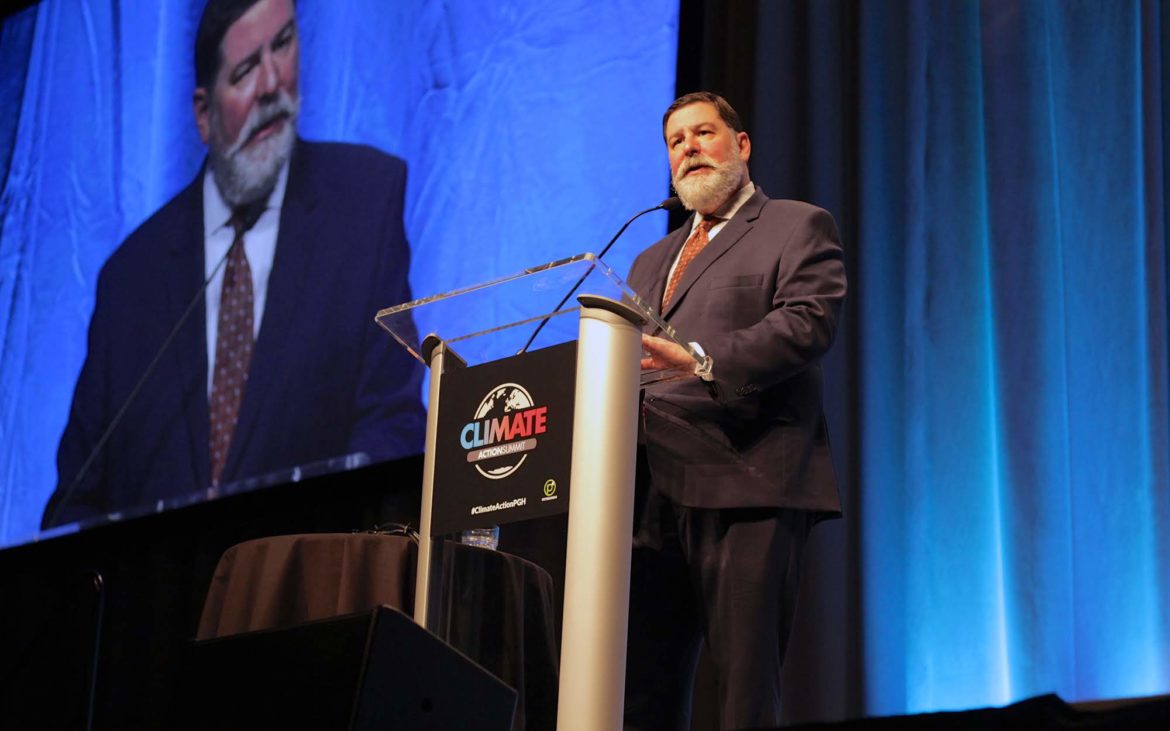 At the Climate Action Summit on Oct. 30, 2019, Pittsburgh Mayor Bill Peduto doubled down on his support of investing in green energy jobs and environmental cleanup, rather than fracking and plastics. (Photo by Jay Manning/PublicSource)

“Let me be the first politician to say publicly, I oppose any additional petrochemical companies coming to Western Pennsylvania,” he said to applause.

Local environmental groups have lobbied Peduto to speak out publicly against the petrochemical buildout in the region, including the Shell ethane cracker plant under construction in Beaver County, but he said in the past that the Shell cracker decision is not under his jurisdiction and he cannot speak for the elected officials and residents of Beaver County. Recently, the Pittsburgh Business Times reported that ExxonMobil is looking for land to potentially build a cracker plant in Beaver County.

Notably, other politicians, including Reps. Sara Innamorato, D-Lawrenceville, and Summer Lee, D-Swissvale, have been speaking out against the petrochemical industry.

On Wednesday, Peduto doubled down on his support of investing in green energy jobs and environmental cleanup, rather than fracking and plastics. When Peduto talks to business leaders across the country and region, he said, they tell him one thing: “Clean your air and clean your water.”

“They are not asking for free parking or tax breaks,” Peduto said. “They are asking for the basics.”

Peduto said it was time to push back against a common attitude in the region that tackling climate change was bad for business.

“There is this belief that anybody who wants to work to address climate change is bad for business,” he said. “And that culture is very real in Western Pennsylvania. That belief that those who are trying to save the planet are anti-business, resonates far beyond the fossil fuel industry. I can’t find a corporate partner to stand with me. None. Zero.”

Allegheny Conference CEO Stefani Pashman said in a statement Thursday that she was "disturbed" by the mayor's comments.

"Mayor Peduto’s statement was misguided and unnecessarily creates a false choice," Pashman's statement said. "A strong economy is essential to provide prosperity for everyone who lives here while we work together to improve our environment and quality of life. Leveraging the region’s natural and human resources in a responsible way is part of our diverse economic development strategy."

Grant Ervin, Pittsburgh’s chief resilience officer, said he knew Peduto had been considering making the statement but that he didn’t know he was planning to say it on Wednesday. “I think he took advantage of the situation,” Ervin said. Ervin said the mayor is planning to write a letter to Gov. Tom Wolf making it clear that “the expansion of this industry is an impediment to the region’s growth.”

The media relations teams at ExxonMobil and Shell Oil Company did not return a request for comment at the time of this article’s publication.

Peduto’s speech followed David Wallace-Wells, a journalist who wrote the book “The Uninhabitable Earth” about the dangers of climate change. Wallace-Wells emphasized in his talk that the only way to avoid a catastrophic future caused by climate change was to change the politics in the country.

“What we need more than new technology, more than new tools, is a new politics,” Wallace-Wells said before Peduto took the stage. “A new way of overcoming all those human obstacles.”

Peduto said that investment in fossil fuels was coming at the expense of what he described as trillions of dollars that would be invested in sustainable technologies in the future. “There is a direct opportunity cost when we continue to invest in 19th century industry that costs us the opportunity to bring 21st century industry to this region,” Peduto said.

Matt Mehalik, the executive director of the Breathe Project, one of the leading environmental groups in the region, praised Peduto after the speech for coming out against additional petrochemical industry. Peduto’s statement was “remarkable” and “shocking,” he said.

“It is a welcome message. That takes leadership for him to speak out given the enormous political pressures on him to not do so. It really shows how much of a courageous act that was,” Mehalik said.

Mehalik wasn’t bothered that the mayor didn’t also speak out against the Shell plant and urged others to support the mayor for taking this position on additional petrochemical buildout. “He came right out and said that’s not really where we need to be putting resources,” Mehalik said. “That’s not the path for our future success. That framing of it is, I think, so needed and so welcomed and it’s up to us to back him up.”

Peduto also cautioned the summit’s attendees to not repeat the mistakes of the  2016 election and the way some politicians approached workers who were being left behind. “When we went into towns that have not been part of the economic change that is occurring and we’re going to make you coders, it was tone deaf or insulting, I’m not sure,” Peduto said.

“You want to turn a coal miner into an environmentalist, put a paycheck in his hand," he said.

Peduto emphasized that partnerships involving industry, government and the community are the way the region has solved past problems and that are necessary to help the region move beyond the Shale boom. “I ask you, how can we get our community to work together as one, to be able to end the nonsense of debating whether or not climate change is real and whether man is responsible, to end the nonsense of being able to say that our economy of the future is based on fracking and petrochemicals?”

Ervin said “it’s a big move for us” because it emphasizes goals in the city’s climate action plan. But there are big challenges left to reducing emissions in the region. “The biggest threats on the horizon are the role of the steel industry in Clairton, the Beaver Valley nuclear plant and the petrochemical plant,” he said. “Those things will be contributing huge amounts of emissions and point us in the wrong direction.”

Update (10/31/2019): This story was updated to include comment from the Allegheny Conference and context on local politicians opposed to the petrochemical industry.

The Climate Action Summit is sponsored by The Heinz Endowments, which is also a supporter of PublicSource.