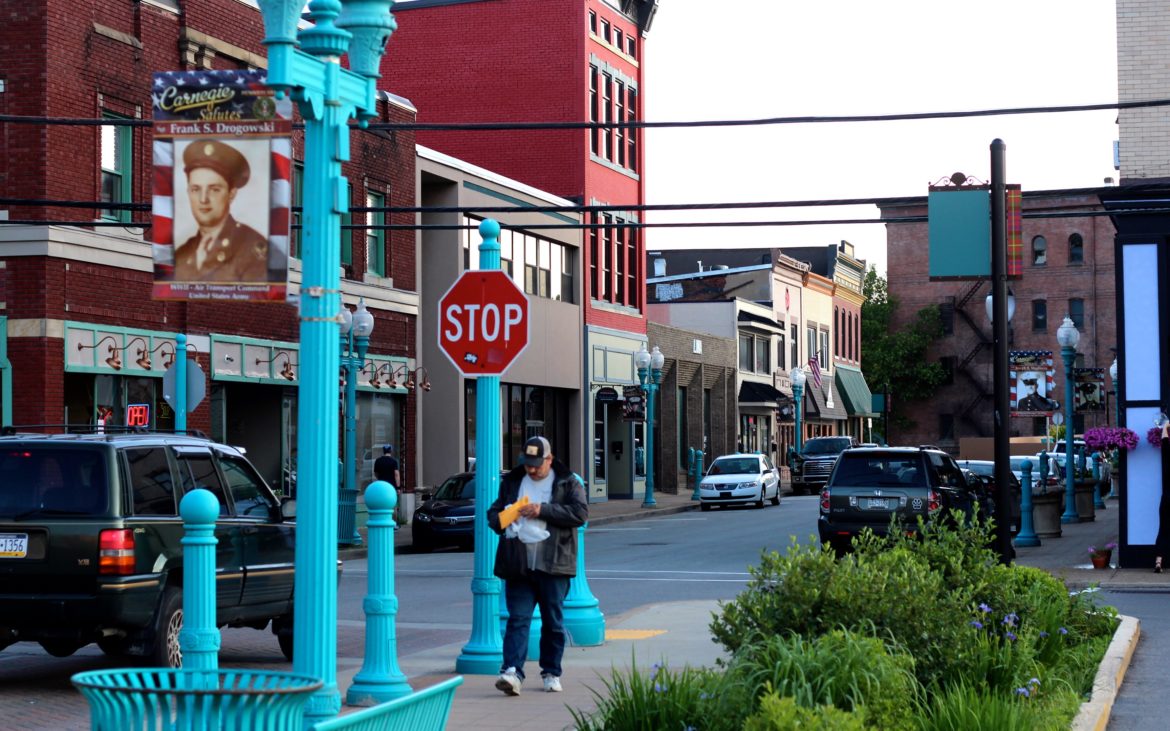 In Carnegie, the loss of white residents living near its Main Street strip reflects changes in metropolitan regions throughout the country, including Pittsburgh. (Photo by Jay Manning/ PublicSource)

In Whitehall, the area near South Hills Country Club is far more diverse than two decades ago. Recent immigrants from Nepal and Bhutan are buying homes in what was once a mostly white community.

“A lot of them are buying up homes left and right,” borough manager Jim Leventry said. “Our property values are going crazy because of them.”

But the stretch of the township surrounding PA 51 saw a population drop of about 1,300 white residents from 2000 to 2016, according to census data. The area has seen an increase in black, Hispanic and, most prominently, Asian populations, including recent immigrants from Bhutan and Nepal. Meanwhile, census data shows that the area is less affluent than in 2000.

Why demographics have shifted in this census tract of about 6,200 residents is hard to say. But the ongoing separation of white, middle-income residents from lower-income, non-white residents is a prevailing trend in metropolitan areas across the country, including in Pittsburgh.

A recent study of census data from the University of Minnesota Law School highlights the concentration of poverty caused at least in part by the departure of middle-income white residents — particularly from suburban neighborhoods — as a more prominent trend than urban gentrification.

In suburban Pittsburgh, areas like Carnegie, McKees Rocks and Wilmerding have seen white residents leaving — whether by relocating or by death — and concentrations of poverty increasing.

The study examined the 50 most populous metropolitan areas in the country, and like the Pittsburgh region, many of them see a prevailing trend of concentrated poverty that study author Will Stancil links to wealthier, white residents leaving diversifying neighborhoods.

“It’s what you would think of midcentury white flight, but often in the suburbs,” Stancil said.

The study examines demographic changes in the seven counties that comprise the Pittsburgh metro area. The overall population of census tracts considered by the study to be in economic decline dropped by 11% in those counties. But the percentage of low-income residents in those tracts increased by 16%. That indicates a new set of areas where the share of people in or near poverty has grown.

In Carnegie, for instance, three census tracts that capture the borough’s Main Street showed a loss of about 1,200 middle- and high-income residents there, while the number of low-income residents increased by about 800.

The opposite was true in two adjacent tracts to the north and south of central Carnegie. Those tracts together lost about 400 low-income residents, and gained about 360 more middle- and high-income residents.

The southern tract, which includes parts of Glendale and Scott Township, also saw in increase of 145 black residents, bucking the study’s overall race and income patterns. The northern tract includes much of Rosslyn Farms and Thornburg, and saw minimal changes in population based on race.

Like much of the region, Carnegie felt the loss of major employers in the steel and railroad industries. But Carol Dlugos, director of the Historical Society of Carnegie, said the borough’s seen new economic activity from a tourism scene based around restaurants and specialty shops.

“All of the sudden in the last 10 years or so, we’re becoming a destination,” Dlugos said.

Notably, the Pittsburgh region saw smaller changes in race and economic population on the neighborhood level than other regions, including Cleveland and Detroit.

In parts of the Detroit suburbs in economic decline, the number of white residents decreased by 261,000 between 2000 and 2016. The number of black residents in those areas grew by 115,000, according to the study. 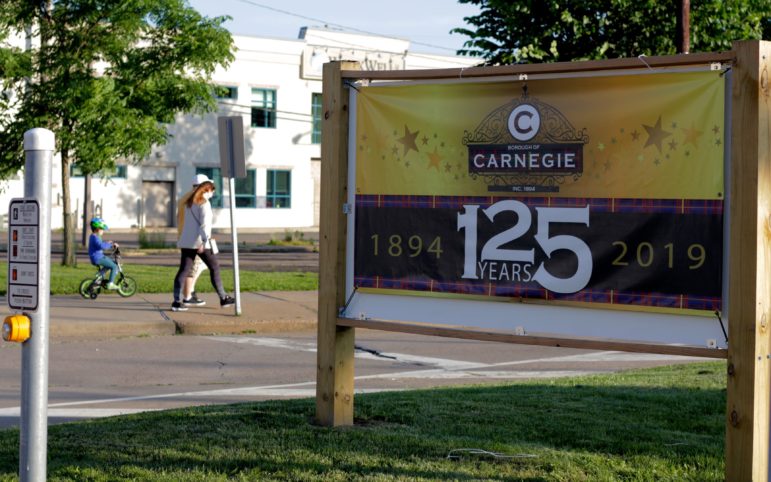 Carnegie is among the Pittsburgh suburban communities to show notable decreases in the white population of some census tracts. (Photo by Jay Manning/ PublicSource)

Stancil said Pittsburgh’s trend likely looks different because the region is among the whitest of the nation’s top 50 metropolitan areas. According to census figures from 2017, 87 percent of residents in the seven-county Pittsburgh region are white.

“Pittsburgh, because it’s such a white city, it’s going to stand out when you compare it to other cities in the country,” said Junia Howell, a professor of sociology at the University of Pittsburgh.

The other factor that could mute the appearance of white flight is Pittsburgh’s hilly geography, Stancil said. Other regions have more communities for commuters an hour outside the central city, though Pittsburgh's geography might limit the span of suburban development.

But further from Pittsburgh, cities and towns have also seen residents moving out, according to Cindy Gormley, community development director at Lawrence County Community Action Partnership. Residents move toward new construction, or toward services like schools that they perceive as better. That has left poorer residents in declining central municipalities, she said.

Gormley, who works in Lawrence County but lives closer to Pittsburgh, notes that one reason older residents move is because they’re looking to downsize.

“Older people don't want those big houses anymore. They want the smaller apartment,” Gormley said. “If they’re retired, they want the ability to travel or maybe live with their child in Colorado for two weeks, or Florida for two weeks — they want that flexibility.”

Lawrence County is outside the seven-county Pittsburgh metro area defined by the U.S. Census Bureau. Its county seat, New Castle, is about 50 miles north of Pittsburgh.

And even as poverty has intensified in some suburban areas, Pittsburgh’s suburbs are also seeing displacement. According to the study, 9,000 lower-income residents left areas in “economically expanding” areas. Those same areas saw an overall increase in population by 22,000.

Howell said gentrification captures the community’s attention, in part because white residents are more exposed to it.

“Pittsburgh, because it’s such a white city, it’s going to stand out when you compare it to other cities in the country”

“It’s where the broader population, the white population, is being introduced to the problem” of inequality, she said.

Howell is also researching population changes based on income and race. She said that academic research on poverty concentration often fails to consider how data on poverty in a specific area compares to the broader region as a whole.

“How many people in the entire Pittsburgh area region live in poverty?” she said. “Looking at those people, how many are concentrated in the Hill District, in Homewood? It’s a relationship instead of a different count.”

Richard Morris, director of housing at the Urban League of Greater Pittsburgh, said there is a lack of attention paid to poverty in Pittsburgh’s suburban communities. In particular, efforts to address affordable housing aren’t considered regionally.