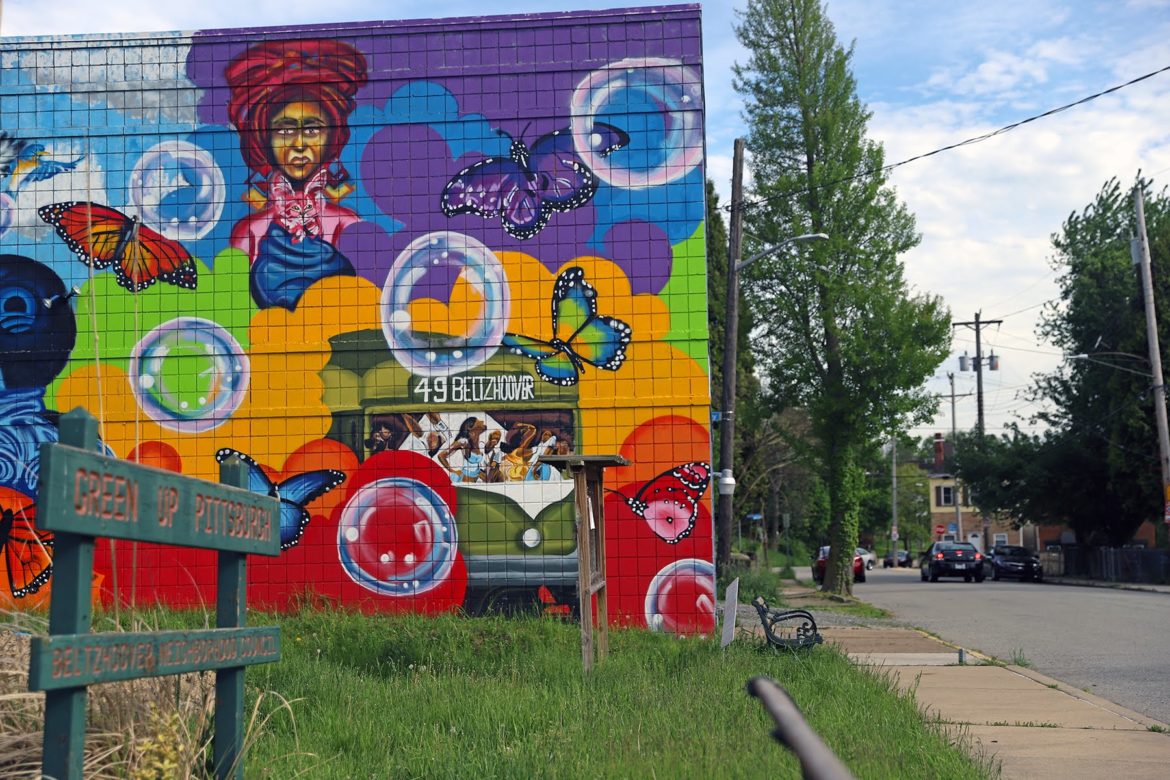 From 1950 to 2010, Beltzhoover steadily lost three-quarters of its population, driven in part by white flight. Since then, the neighborhood's population loss has been driven by the loss of Black residents. (Photo by Jay Manning/PublicSource)

Jennifer Cash Wade’s family really stood out when they moved to Beltzhoover in the mid-1950s.

“There were very few Black families. Beltzhoover was basically a white community,” she said.

But as in many neighborhoods affected by white flight, the racial makeup shifted dramatically. From 1950 to 2010, the neighborhood steadily lost three-quarters of its population, dwindling to 1,925 residents and becoming more than 80% Black.

Over the last decade, population loss continued but was no longer dominated by white flight. It was driven largely by the departure of Black residents. Black flight appears to be the dominant demographic shift not just in Beltzhoover, but through much of Pittsburgh over the past decade.

While the city lost negligible white population from 2009 through 2018, it saw a drop of about 7,000 Black residents — or 9% of its Black population — according to an analysis of U.S. Census Bureau survey results by researchers from the University of Pittsburgh. That was offset only partly by increases in Asian and multiracial residents.

Some of the city’s losses are the suburbs’ gains. Allegheny County outside of the city increased Black population during the last decade.

"I think there are people who want to live in the city but can't find housing at their income level, so they're being forced out to Clairton and McKeesport and surrounding communities,” said Pittsburgh Councilman Rev. Ricky Burgess. Others, he said, find that the city lacks the “amenities and outcomes and access to resources” that they seek.

The pandemic could alter flight patterns "in the very short term" by reducing moves out of the city because people "may want to stay closer to the homefront for a while," said Sabina Deitrick, an associate professor at Pitt’s Graduate School of Public and International Affairs, and co-director of the Urban and Regional Analysis Program at UCSUR. Quality apartments in some city neighborhoods may become more affordable if the number of college student renters declines, she said.

Longer term? "The pandemic has exasperated the inequities that were already existing in our city," Burgess said. "African Americans and those who are in low- and moderate-income communities have disproportionately received the virus and are disproportionately in need of the social services” to heal its effects.

Beltzhoover, with a population now estimated at about 1,200, lost more than a third of its Black and multiracial population between 2009 and 2018, according to a University Center for Social and Urban Research analysis of Census Bureau American Community Survey data. The largely residential neighborhood, which occupies the hillside between Route 51 and the city’s Hilltop communities, lost just a tenth of its smaller white population.

Her youngest son, his wife and their daughters, though, are part of the exodus. “My son wanted to get his family out of Beltzhoover,” she said. She identified some homes. “And they ended up buying and choosing one in Munhall.”

It’s a scenario she’s seen in other families, too, driven in part by the perception that “the opportunities [in Pittsburgh] were not as plentiful for Blacks as they were for whites,” she said.

Burgess agrees that the degree of difficulty of Black life in Pittsburgh is likely a factor in the exodus.

"Part of it, overall, certainly, is the effects of institutional racism, that shows itself in the lack of affordable housing, the lack of living-wage jobs,” he said, adding, “We have whole communities that don't have gas stations, don't have grocery stores, don't have drug stores."

That rings true in Beltzhoover, where a modest commercial strip has dwindled to one store with part-time hours, according to Cash Wade and other consensus group members.

These days, people “want to be in walkable communities. They want to be able to walk to a grocery store or walk to a restaurant,” said Jessica Ruffin, another consensus group member. Beltzhoover doesn’t fit the bill. The grocery store is two bus rides away. “You can’t even do it with one bus.”

The consensus group has purchased the former Beltzhoover Elementary School, and is working with the Hilltop Alliance neighborhood organization and with Councilman Bruce Kraus on a revitalization plan. “We’re working very, very diligently,” said Cash Wade, “to bring our community back.”

Stanton Heights: 'A desert for kids'

When Gail and Leroy Payne found a house they liked in Stanton Heights, the former hesitated before signing on. “Are we going to be discriminated against?” she remembered thinking. They were, after all, Black, and Stanton Heights was very white.

But in 1993 when they moved in, a neighbor girl came over and asked their daughter: “Do you want to play?” And from then on, everything went fine. It became “such a diverse neighborhood and we all mingle and it’s a big, happy family,” said Gail Payne, 68, a retired city police officer. 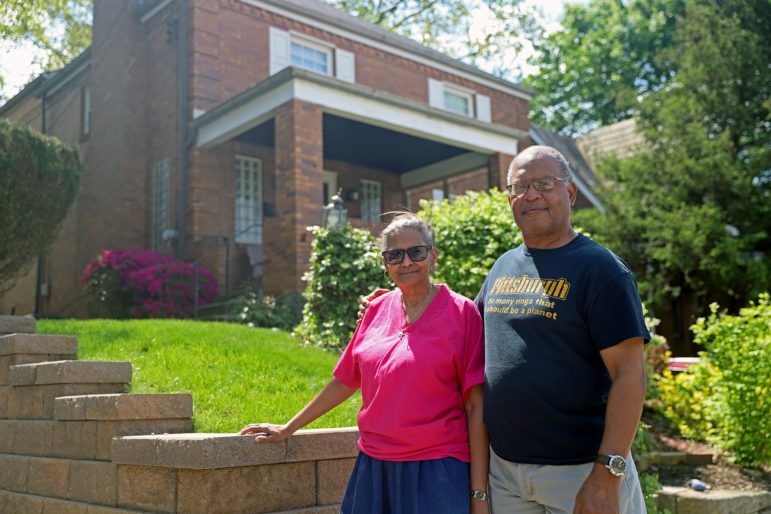 Gail and Leroy Payne stand in front of their Stanton Heights home. One of their two daughters, and one granddaughter, live with them. But their other daughter moved out of the neighborhood, as have many Black and young residents in the last decade. (Photo by Jay Manning/PublicSource)

Stanton Heights, though, appears to be both losing population and diversity, going from nearly racially balanced to decidedly majority white. The bedroom neighborhood’s population dropped last decade by about 15%, with the Black population dropping about twice as steeply as the majority-white population. The loss of residents younger than 25 is especially pronounced.

The Paynes have seen one daughter leave for Maryland before she reached 25, while another daughter, and a granddaughter, still live with them. While they love the neighborhood, they understand why young families leave — for a bigger yard or for more activities.

“I think right now this place is just a desert for kids,” said Leroy Payne, 70, a retired engineer. “There’s nothing for them to do.” Stanton Heights residents are mostly middle class, and homes there are fetching good prices, giving residents the means to move, the Paynes added.

“You're seeing the Black professionals moving farther and farther away from the city,” said Burgess, whose district includes part of Stanton Heights.

That has economic implications, he said. Development is "about attracting the brightest and the best to come to our city. The best and brightest is not homogenous, right? … The city will not grow economically at the pace it could if it doesn't have a diverse palette.”

This shift is not just a Pittsburgh phenomenon, Deitrick said. “It’s happening in other cities,” she said, and it’s driven in part by gentrification, but also by “preferences of people who have options and are looking for different types of communities to live and work in.”

Deitrick, a member of the City Planning Commission, noted that the city is subsidizing the construction of new low-income housing, and last year launched an inclusionary zoning pilot in Lawrenceville. There, developers building or rehabilitating at least 20 new housing units must reserve 10% for households that are below certain income thresholds. “At the end of the day,” she added, “one could argue this was too little, too late.”

Dalena Wallace, 48, lives in a rowhouse in California-Kirkbride that she said is subsidized. Her adopted neighborhood — she grew up in nearby Manchester — saw its Black population drop by about a third over the last decade. That’s a rate of decline twice as fast as that of its small white population.

She’s worried that ongoing renovations of subsidized housing in the neighborhood are a prelude to a reduction in units and to the displacement of the current residents. She said she’s “trying to get some of these young people to pay attention to the fact that gentrification is here, it’s real, it occurred over in the Mexican War Streets, Central Northside area, and if we’re not careful and abreast of what’s going on in our community, and what’s taking place, we may be the next victims, like those in East Liberty.” 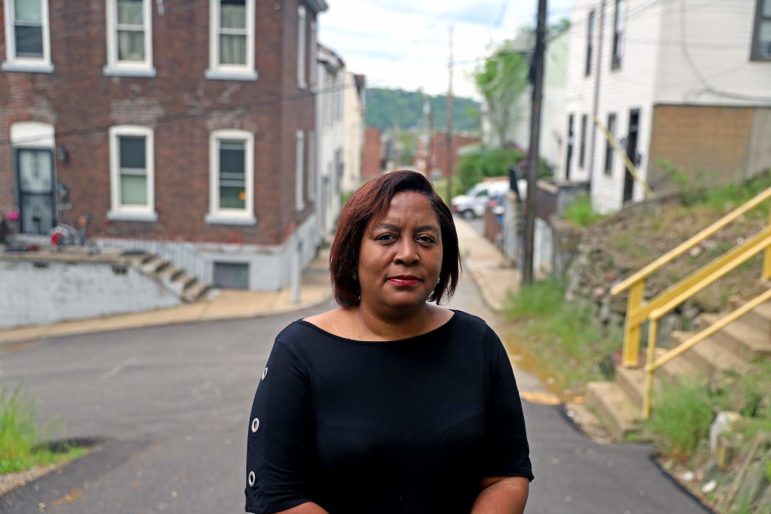 Dalena Wallace lives in a rowhouse in California-Kirkbride. The neighborhood saw its Black population drop by about a third over the last decade, a rate of decline that's twice as fast as its small white population. (Photo by Jay Manning/PublicSource)

She hopes that most of her neighbors can stay. But her son, 27, who lives elsewhere in the North Side, is mulling a move to another state. “Because at the end of everything,” Wallace said, “Pittsburgh is not a very comfortable, welcoming place for African Americans.”

He said he’s now urging allocation of resources to address racism and its effects, looking for something comparable in scope to the response to the COVID-19 virus.

“We have this pandemic going on, so we're sending all of these resources to help curb this pandemic,” he said. “If the results of institutional racism [are] a crisis, then it's time for us to put resources into this crisis.”