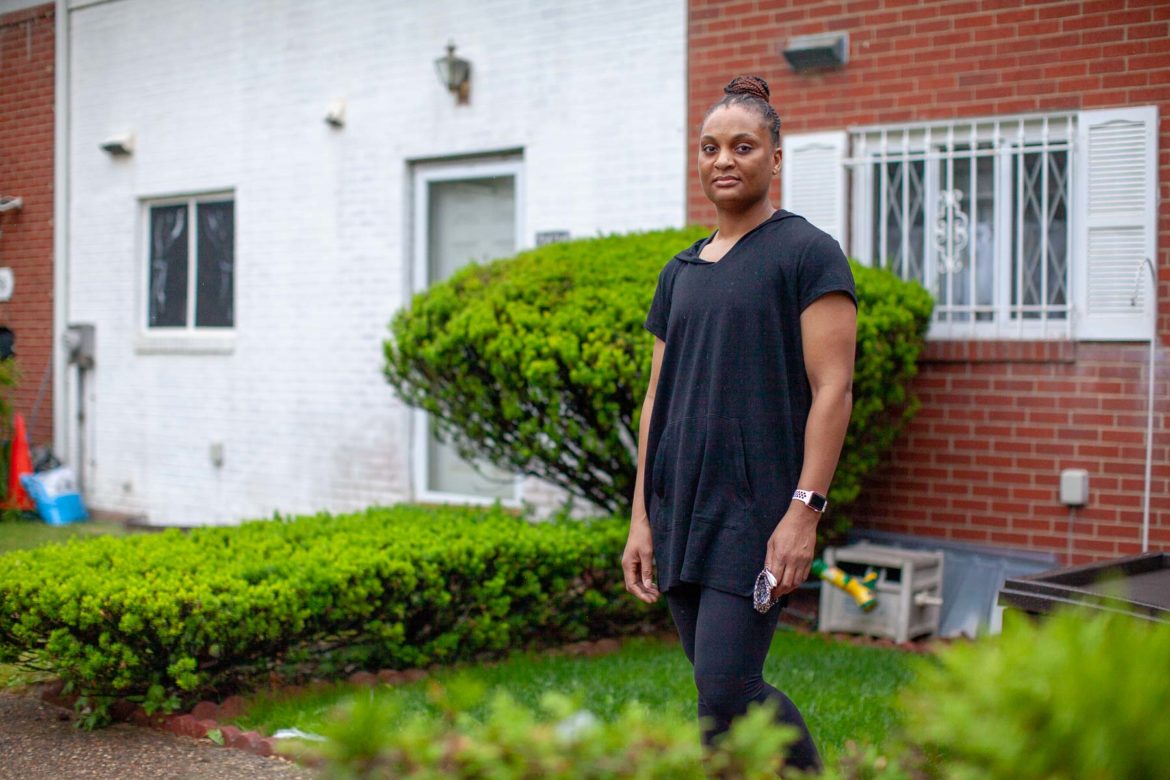 LynnDee Howell, a Park Hill Drive resident and IT professional, photographed outside of the home she shares with her parents on May 28, 2021. The property next door was abandoned, causing damage to her adjacent townhouse until the roof was replaced. (Photo by Quinn Glabicki/PublicSource)

When the roof next door caved in, it created more than an eyesore for LynnDee Howell’s family.

Living in a townhouse community on Park Hill Drive in East Hills, the Howells loved the sense of shared responsibility that pervaded when they arrived in the 1980s. But things changed.

The place next door went vacant five years ago, kids broke the windows, the roof failed, and rainwater started to seep into the Howells’ walls.

“It was definitely frustrating, because we try to take care of our property and make sure that we aren’t doing anything that is impacting anybody else,” said Howell, an IT professional, on a rainy late-May day. What to do? Their former neighbor was no longer caring for the property, and insurance would cover just a fraction of the cost of repairing the Howells’ walls, even as the seeping continued.

Such frustrations are common in Park Hill, a 167-townhouse complex on the Pittsburgh side of the city’s border with Penn Hills. Around one in five of the townhouses are vacant, and no one — not the absentee owners, nor the city, nor a cash-strapped homeowners association — has addressed more than a handful of the collapsing roofs, let alone the broken windows, abandoned cars and missing front doors.

“Gentrification is not the risk here,” said Kendall Pelling, executive director of Rising Tide Partners, a year-old nonprofit dedicated to stopping displacement. “I would say the risk here is ‘rotrification,’” a term he coined to describe how unchecked decay spurs abandonment. 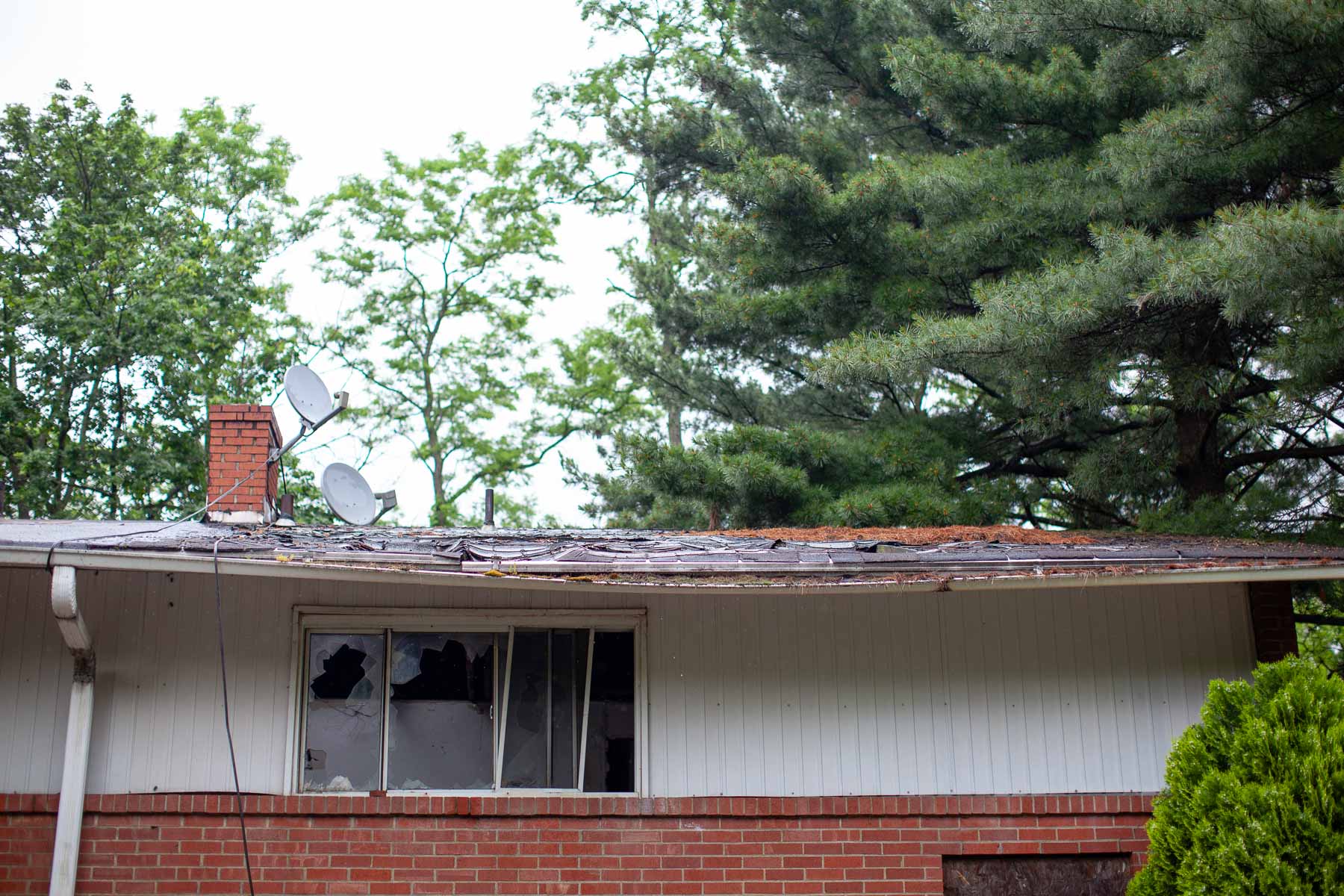 Deteriorating roofs and broken windows, like those seen on this vacant house, are common along Park Hill Drive. (Photo by Quinn Glabicki/PublicSource)

“Displacement doesn’t just happen because there’s a hot market, and the evil developers come in and buy things up and raise the rents,” said Pelling. He estimated that more Pittsburgh neighborhoods are “rotting away” from neglect than facing large-scale gentrification.

Built to be a homeowner paradise, with maintenance staff to tend the shared spaces in which Howell played as a child, Park Hill may yet succumb to rot. 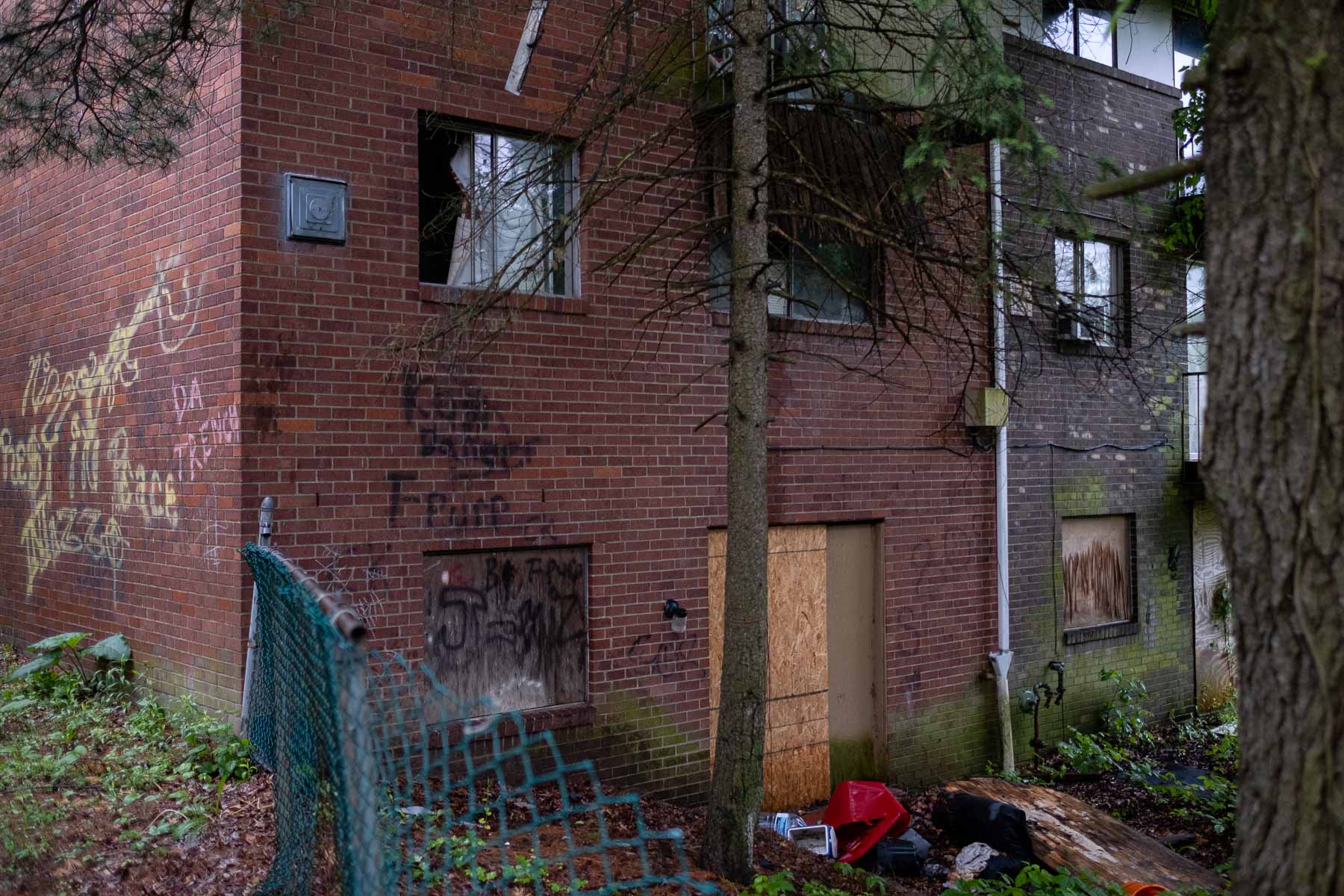 Trash, debris and abandoned furniture litter the ground behind a neglected property on Park Hill Drive. (Photo by Quinn Glabicki/PublicSource)

But the remaining homeowners, the East Hills Consensus Group and Rising Tide Partners have hatched a plan to save it. Among the early results is the new roof and windows the team installed on the townhouse next to Howell’s. While it still needs to be gutted and restored before anyone can move in, the seepage, at least, has stopped.

A concrete turtle and scattered toys hint at the laughter that may yet echo across a common area surrounded by Park Hill townhouses. The missing door and trash-strewn entryway of one of those townhouses, and the nearby puddle that appears to reflect a backed-up sewer line, cloud that vision.

“I would like to see the houses fixed up and a good place for children to play,” said Diane Daniels, founder and president of the East Hills Consensus Group, a coalition of organizations dedicated to the neighborhood of around 2,800 residents. Park Hill, which is just a fraction of East Hills, “was a very nice area for affordable homeownership,” and could be again, she said. 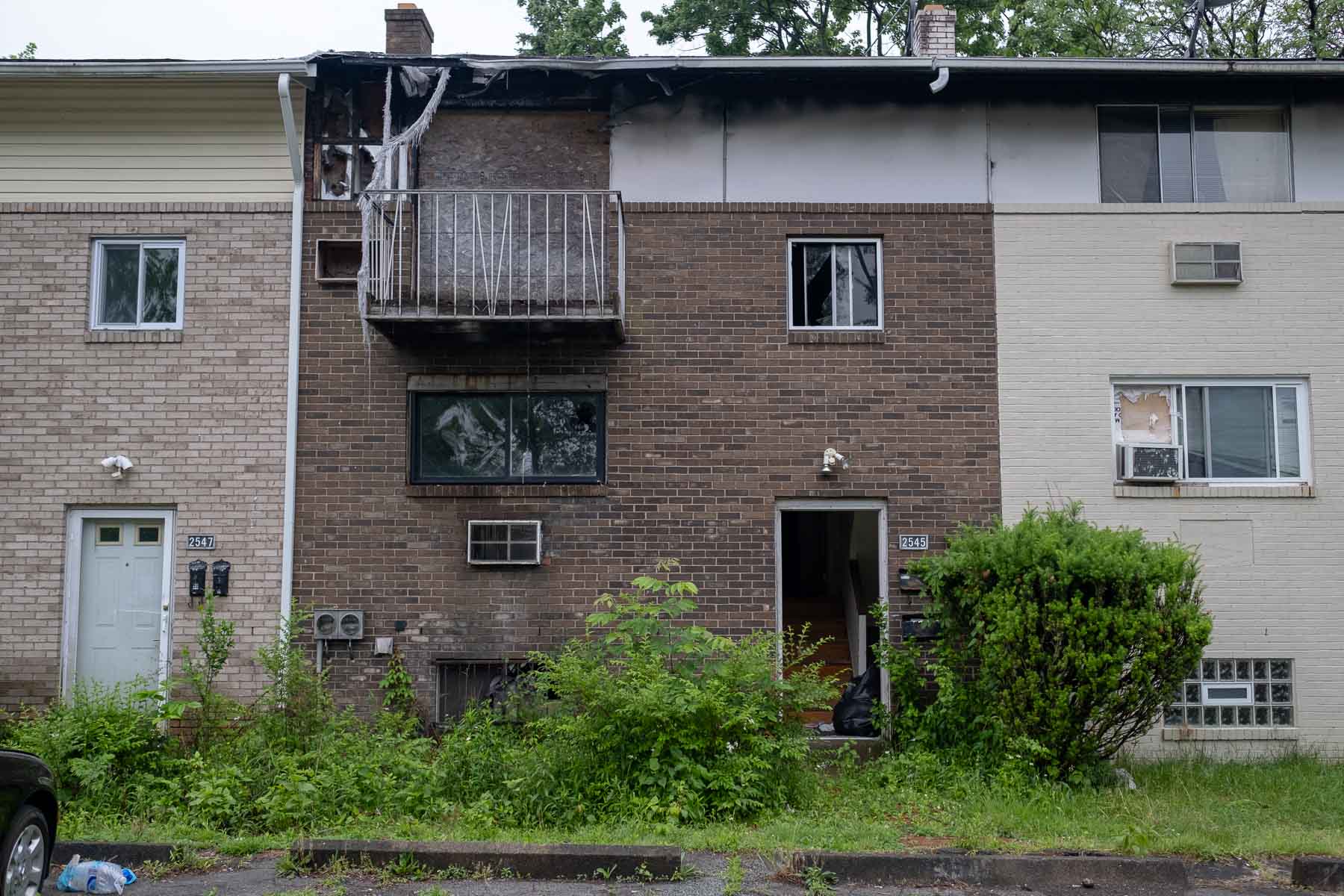 An empty townhouse on Park Hill Drive lacks a front door. It is flanked by two apparently occupied townhouses. Behind it is a common area replete with children’s toys. (Photo by Quinn Glabicki/PublicSource)

Park Hill was intended to mimic Chatham Village, a Depression-era planned community on Mount Washington. "This was supposed to be an affordable housing community, mixed income, of homeowners, “ said contractor Steve Catranel, whose father helped to develop and build Park Hill in the 1960s. The son still owns a handful of the townhouses.

Over time, many of the early homeowners dwindled, said Catranel. “Some of them fled. Some of them sold to slumlords.” Perceptions of crime, perhaps driven by nearby apartment complexes, sped the transformation. “It was just a spiral down.” 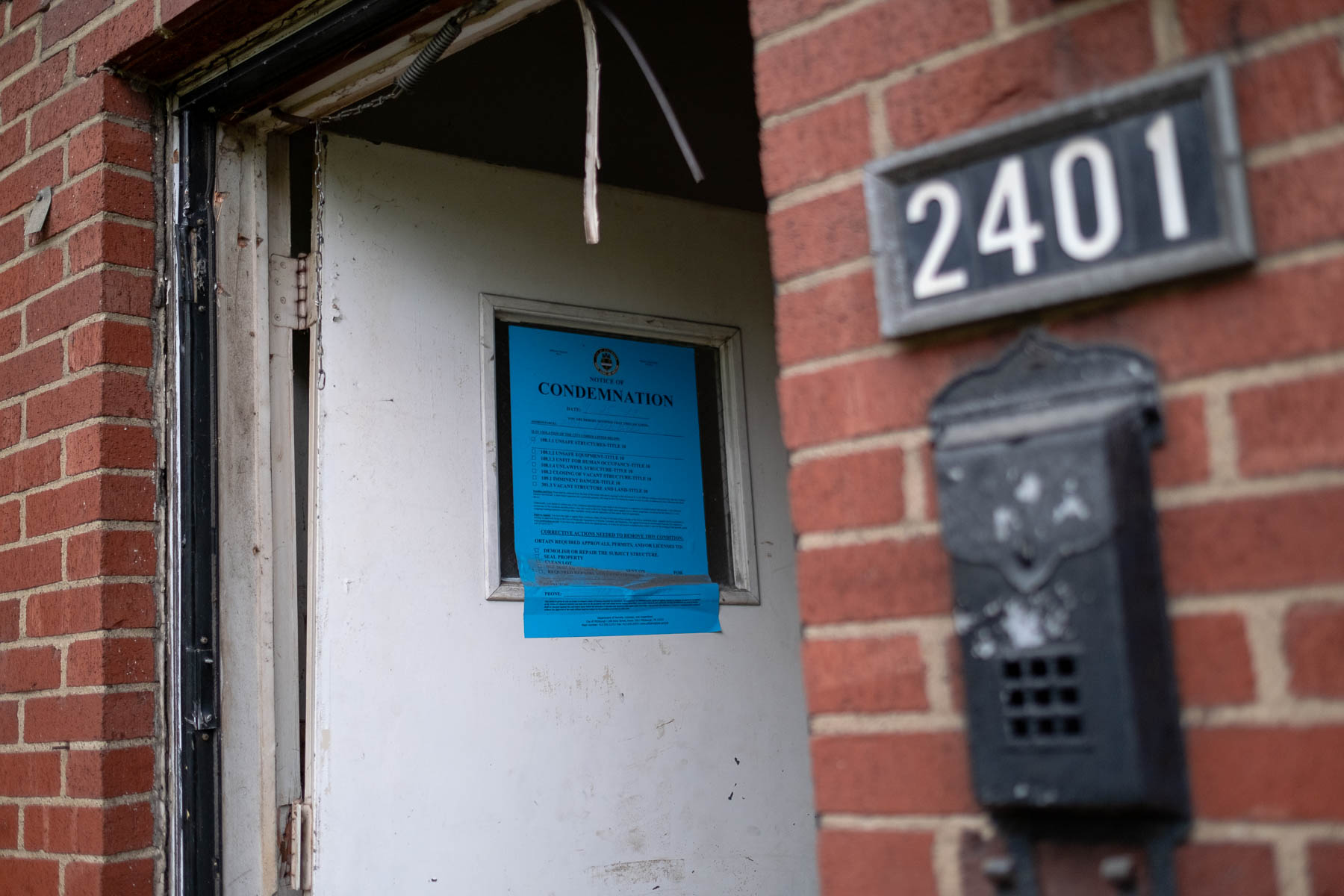 A notice of condemnation posted on the front door of an abandoned property in Park Hill. (Photo by Quinn Glabicki/PublicSource)

Pelling called it “a really good example of how blight is systemic injustice."

City leaders in the 1990s, he said, focused redevelopment resources where market forces were deemed favorable. They put little money into areas perceived as having low market values — often including Black neighborhoods. Many abandoned houses were left to rot.

City Councilman Ricky Burgess, whose district includes East Hills, said he believes Park Hill's decline, and the city's lack of investment, were related to the early 1990s crack epidemic. It drove some homeowners to sell to landlords and deterred spending. "It was difficult to do development when people were shooting at each other," he said.

Pelling calls public sector neglect of troubled neighborhoods "blightlining." He characterized it as "just as destructive as redlining," which is the historic practice of denying loans and investment to minority neighborhoods.

Now the price of addressing the decay is many times the cost the city could have paid if it had decided, decades ago, to repair roofs and slap boards on doors and windows, Pelling said.

The East Hills Homeowners Association, created to collect dues from Park Hill property owners and contract for shared maintenance, has the legal right to intervene and fix properties. But as fewer and fewer owners paid the $40-per-month association fee, its budget dwindled to the point at which it could afford little more than lawn mowing service.

Al Stewart, president of the association, said those who don't pay dues tell him, “'Well, you don’t do enough.' But you can’t do much if you don’t have any money.” 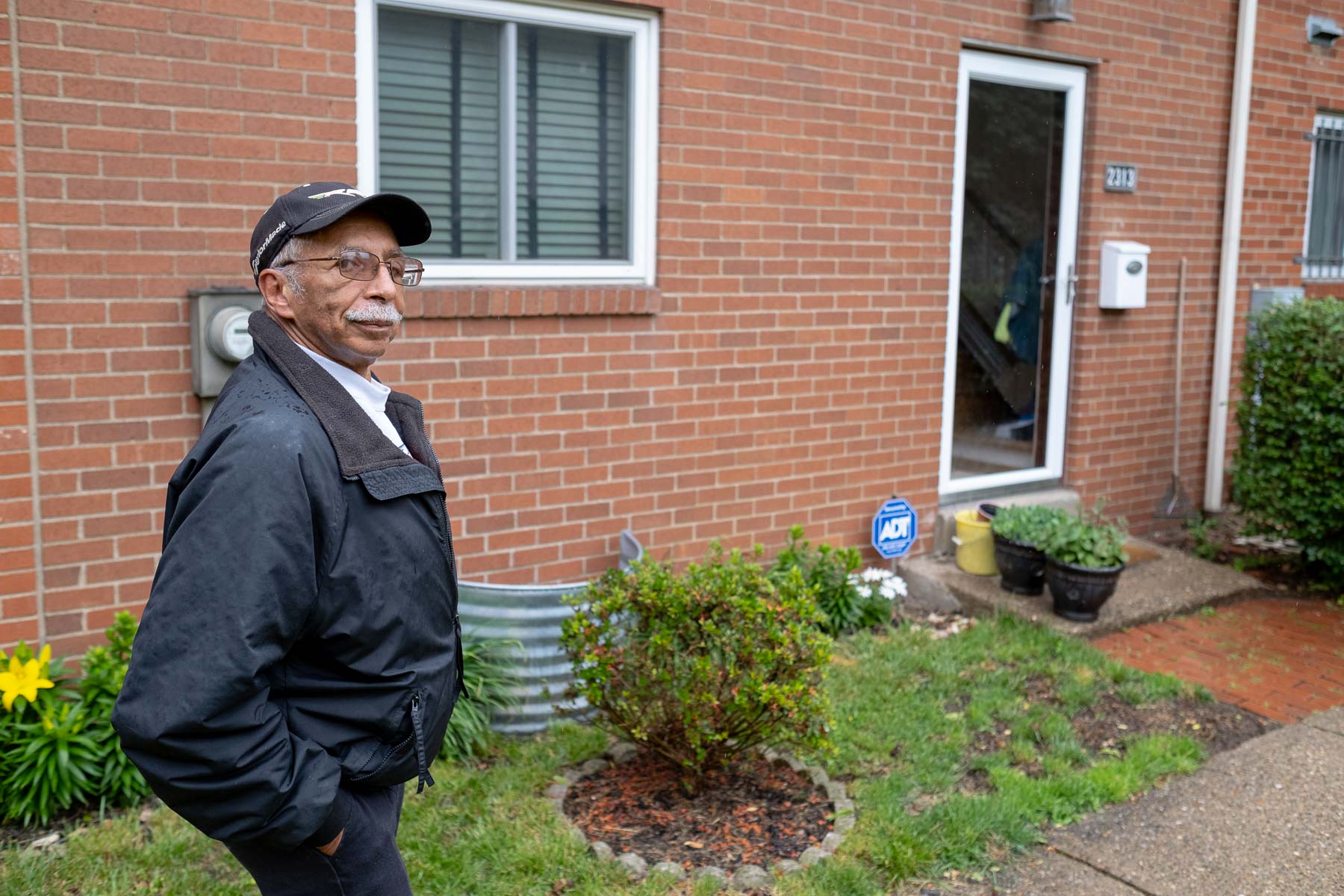 Burgess said communities rebound when they have sophisticated and dedicated organizations working on their behalf — and funding. The East Hills Consensus Group, forged a decade ago, provided the dedication.

A few years ago, the homeowners association and the consensus group, plus Catranel, began reaching out to city officials. Eventually, Mayor Bill Peduto’s administration became involved, and the Urban Redevelopment Authority fronted $35,000 to pay for planning in 2019.

Pelling said the goal is to raise more money, then fix them up and sell them — at affordable prices, and largely to current Park Hill residents. The financing plan calls for selling a few promptly, but renting out others for 15 years and then selling them to the tenants, if possible. 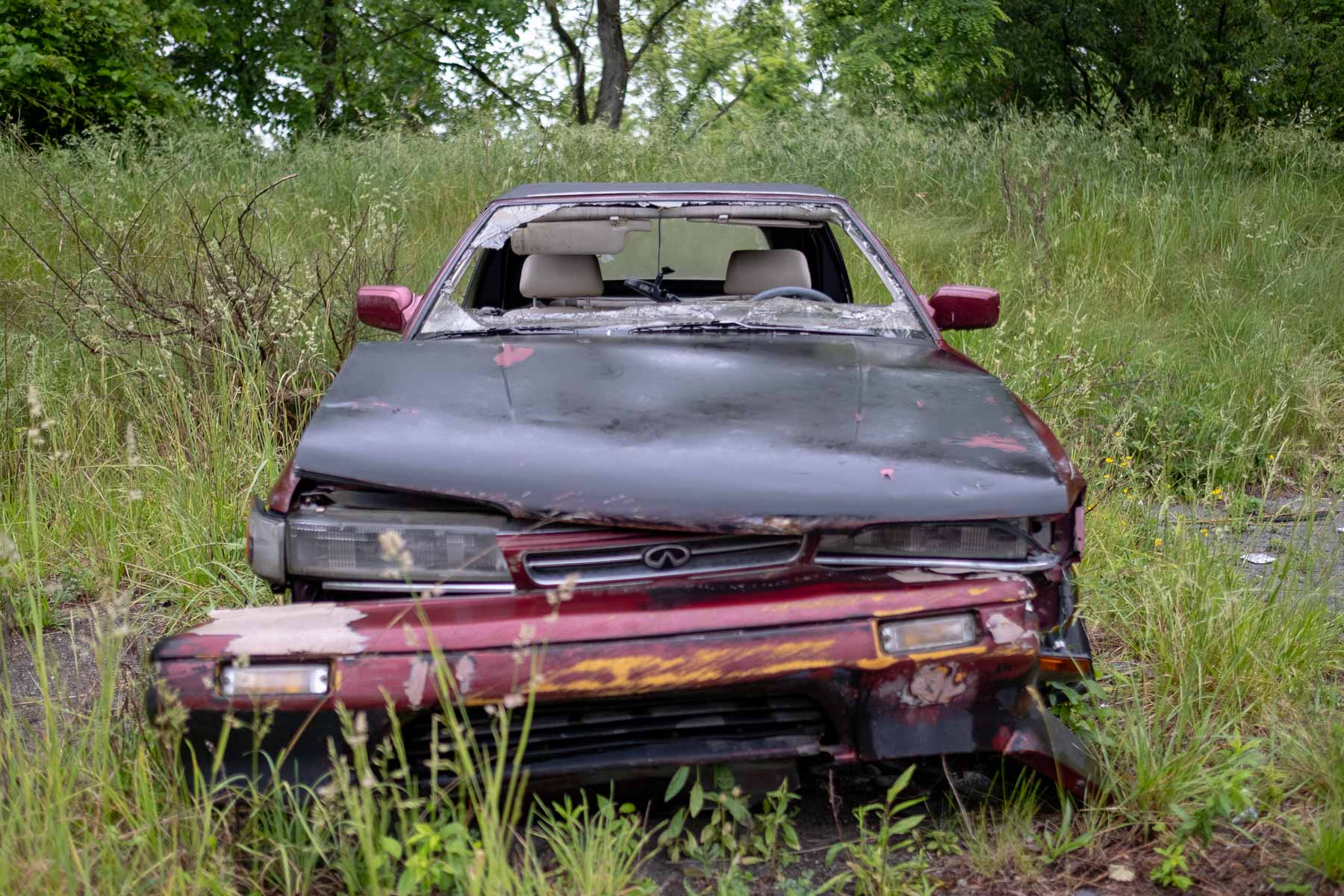 One of several dozen abandoned cars scattered among the 167 townhouses and shared spaces of Park Hill Drive. (Photo by Quinn Glabicki/PublicSource)

One resident told PublicSource that she believed the townhouses would become targets for gentrification and suggested that a leaky roof is better than no roof.

Asked about other residents’ fears, Howell said she understands the wariness. “You see the word gentrification everywhere,” she said, “... and they’re pushing out people of color and changing everything around and boosting up the market for those houses for that area.” 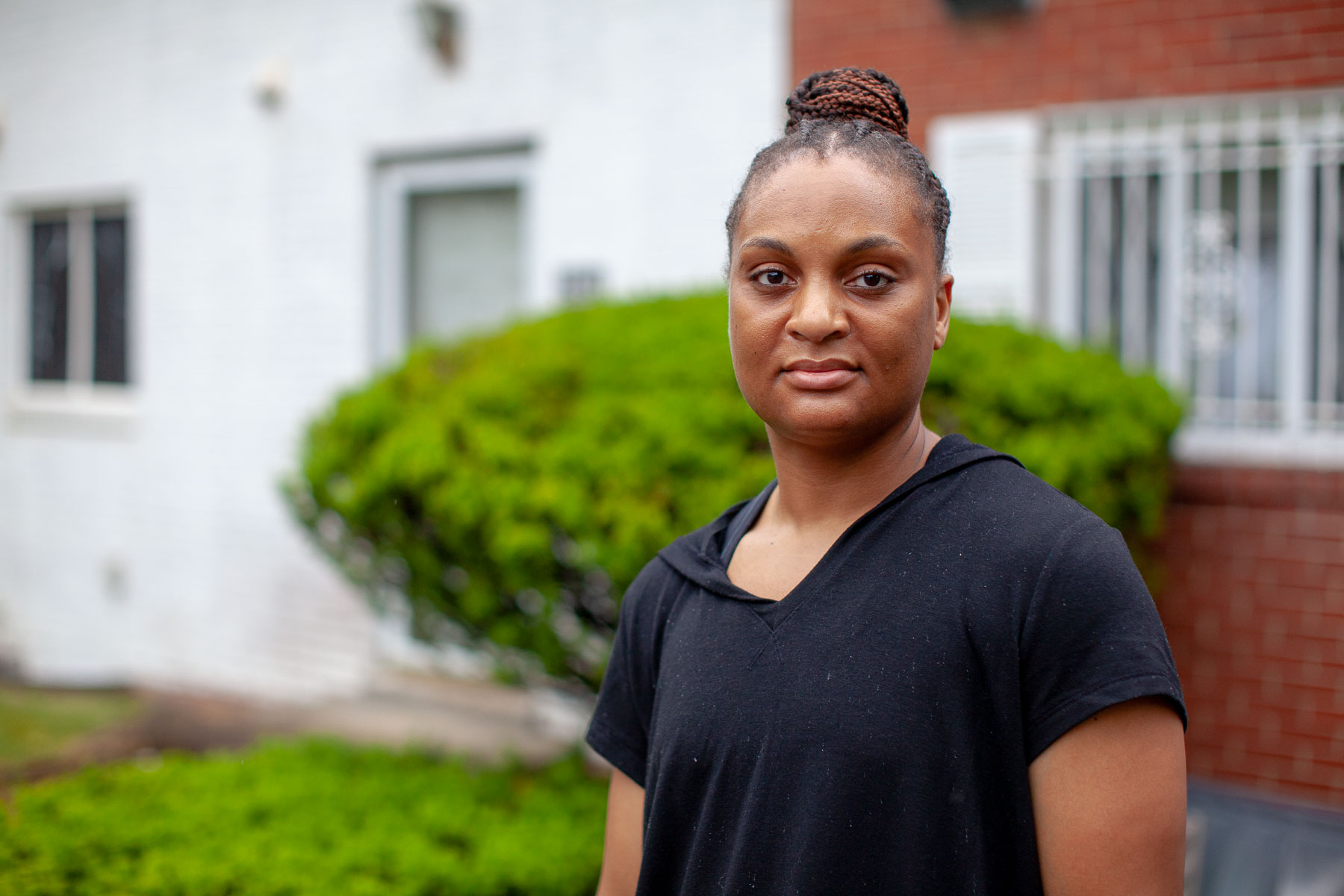 LynnDee Howell, who has lived on Park Hill Drive since she was 7, understands the worries of residents who fear gentrification but has faith in the team that has emerged to restore the townhouses. (Photo by Quinn Glabicki/PublicSource)

Building trust, she said, will be one of the biggest challenges. She believes that the team assembling around Park Hill is dedicated to the existing residents, and that an as-yet-unscheduled post-pandemic community meeting might help win over skeptics, especially if it includes presentation of concrete plans and timetables.

Besides the crumbling roofs and broken glass, Park Hill is home to overgrown trees and crumbling parking areas clogged with abandoned vehicles. Despite all of that, none of the residents interviewed seemed to want to leave.

Leslie Burden has lived on Park Hill for eight years, and he’s renting a townhouse with a leaky roof. A truck owned by someone else, which never seems to move, sits outside his front door. The townhouse next door is vacant, and the back porch recently fell from it.

“I don’t want to move, unless I have to. I like it here,” said Burden. He’d like it better without the leaks, the vacant townhouses and the truck. “I want anything that is going to make it look better and help me,” he said. 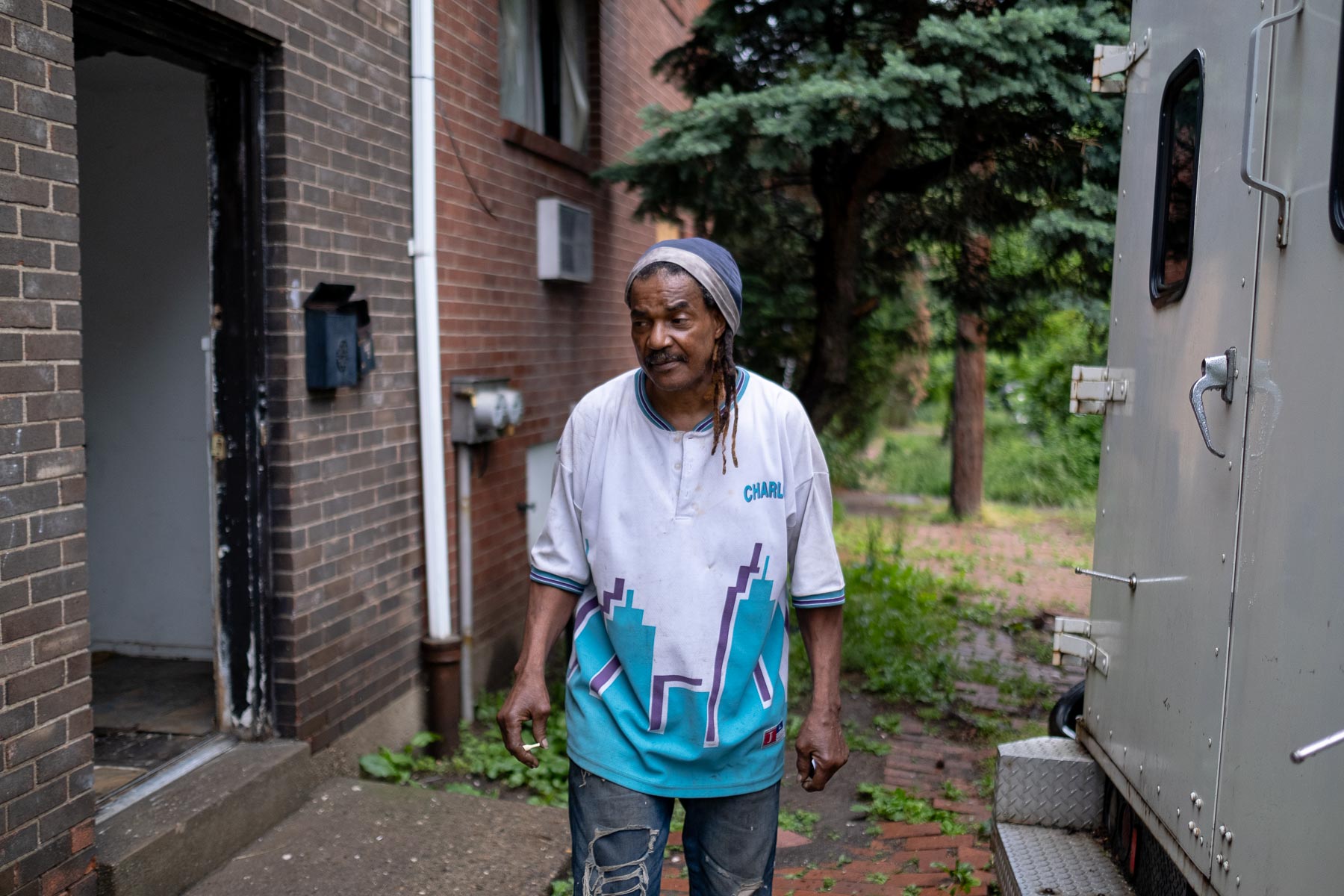 Leslie Burden, a Park Hill Drive resident, photographed outside of his home on May 28, 2021, with an abandoned and decaying unit behind him and a truck that hasn’t moved in months. (Photo by Quinn Glabicki/PublicSource)

It’s doubtful that his situation will change as quickly as he might hope.

Rising Tide Partners had hoped to jump-start its effort with a $300,000 grant from the state Blight Remediation Program, but its proposal was not among the 84 statewide that shared $12 million in funds announced in May. Pelling said that setback slows the timetable for remediation and may force the team to borrow more money. It won’t change the long-term plan, he said.

Chris Thomas is willing to make a long-term bet on Park Hill.

He is in the process of using URA and Dollar Bank programs for new homeowners to buy the townhouse that he has rented for 10 years. That’s despite a recent sewer backup that stained the downstairs carpet. 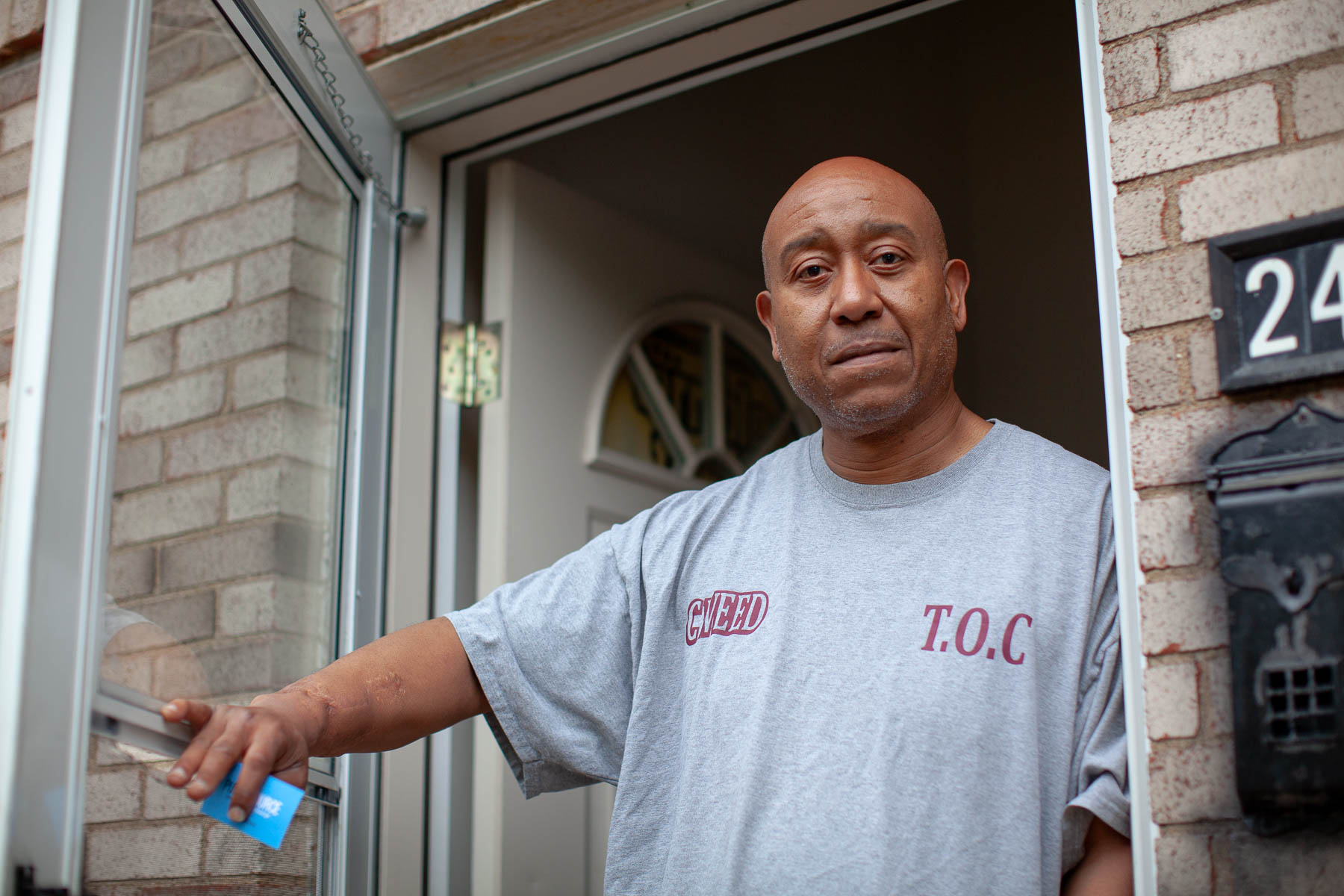 Chris Thomas is in the process of buying the townhouse he now rents on Park Hill Drives. A recent sewage backup created "a mess," but he loves watching the birds from the front porch. (Photo by Quinn Glabicki/PublicSource)

Upstairs, the air is fresher. “You wouldn’t believe the birds. Blue jays, cardinals, hawks fly around out here. It’s wonderful,” he said, as he stepped from his bedroom onto a porch overlooking a dense patch of woods. “I enjoy the neighborhood.”

East Hills advocate Daniels believes that with a little help from the city and the nonprofit world, the spirit of shared destiny on Park Hill can prevail. “Residents have kept their property up, and they’re working to make sure that they’re living in a good community,” she said. “I see hope. Everything that I see, I see hope.”